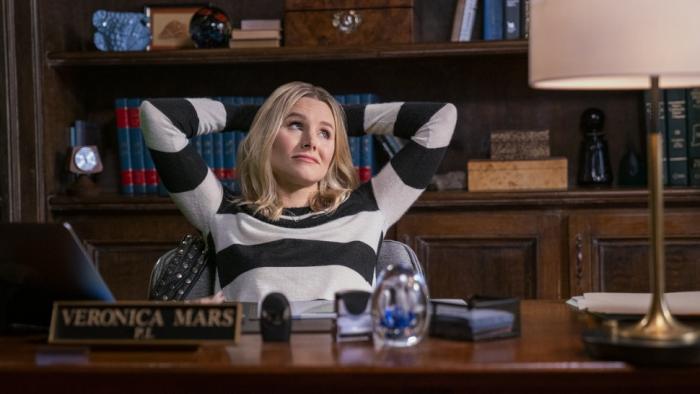 A Long Time Ago, This Used To Be Fresh And Interesting Characterization (Spoiler Free)

This is the spoiler-free review. A spoiler-filled review will be out in a couple of days. Any spoilers in the comments, including those with spoiler tags, will be deleted; repeat offenders will be banned. This does mean you.

OK, so I need to start this review by confirming that I did, in fact, like the fourth season of Veronica Mars, and that I’m a big, big fan of Veronica Mars. Having said that, yes, Veronica Mars herself was the weakest part of the most recent revival. Don’t get the pitchforks quite yet. At least give me the chance to explain how my favorite girl turned into the biggest drag on the show. And that explanation is: Rob Thomas.

See, Rob Thomas is great at a lot of things, and most of those things were on display over the eight hours that constitute season four. The mystery was complex without being convoluted, the villain was understandable without being obvious, and Veronica and Keith cracked the case not by being super-perceptive-to-the-point-of-supernatural-ability, but by working the facts and thinking things through. That’s what Thomas does really, really well. He also managed to work in most of our favorite characters in a way that felt organic and important to the, again, very good plot. Mars and Mars did shtick. Logan played along and was generally just very hot (my good friend Kate might have ended our friendship with this post, but that’s for another day). Dick was there! There was a lot of good stuff. Good stuff to the point that I might have done some excited hand clapping! I really liked it!

And then there was Veronica. Now, again, I love Veronica. So much so that in addition to watching all eight hours of the fourth season this weekend, I managed to watch another eleven hours of the first season (what’s “outside”?). What I came away with most was, seriously, Ronnie, get it together.

The show has never shied away from the darker elements of a soapy, teen noir, which is very important given how close Veronica Mars could have been to any other angsty teen. The only real thing separating her from Brenda Walsh is that Veronica had a very real something to be angsty about. In season one, she was a seventeen-year-old girl whose entire life had been turned upside down by the murder of her best friend and the abandonment by her mother. The break-up with her boyfriend and loss of status at school were the results of, but also significantly less important than, those first two. There was also that whole “this entire town is corrupt, the police are incompetent, and the ultra-wealthy are above the law.” This was not The O.C. After Dark, but Chinatown: The High School Years. It made sense that Season One Veronica would hate her hometown, be desperate to escape it, and have serious trust issues. Which is why it was such as disappointment to see Season Four Veronica … hating her hometown, being desperate to escape it, and having trust issues. I mean, what have you been doing for the last ten years, Ronnie? Didn’t you get out of Neptune and find yourself? Didn’t you end up going to your dream colleges? Did you even live in New York (the answer is yes, and she absolutely figures out ways of sneaking it into conversations)?

It’s not just that it seems like a waste to have a thirty-two-year-old (ish?) woman dealing with literally the exact same issues she did when she was wearing sweater vests and chokers (which, guys, she wore so, so much), it’s that it seems like a waste to have Veronica Cussing Mars not only dealing with the same issues she did fifteen years ago but to have her dealing with them in exactly the same way. You hate Neptune? Move. You hate the corruption and classism exhibited in your town? Run for office, or support someone you think will change things. You have trust issues so significant that it’s daily impacting your life and relationships? Go to therapy. But, for the love of everything holy, do not just angst about it.

All that said, I do still love it. I’ll probably spend the next few days mainlining the original three seasons and the movie again. But as god as my witness, if season five comes out in a couple of years with a forty-year-old teenager complaining about how unfair Jake Kane is, I will be slightly annoyed but probably not do anything more than write another whiny post, because seriously, I love this show so much.