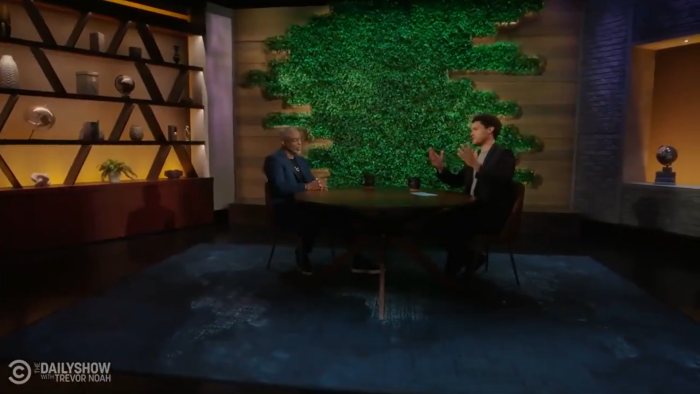 Trevor Noah Talks Moving On From 'Jeopardy!' With Levar Burton

Levar Burton will not be the new host of Jeopardy!. What you just heard was millions of people crying out in agony. That’s what happens when anyone writes or utters the sentence I started with. After a lengthy run of guest hosts, the famed game show chose Exec Producer Mike Richards. We all know how that went. For anyone holding out hope that Levar will be chosen as the replacement’s replacement, don’t. However, that doesn’t mean that all is bad for the former host of Reading Rainbow.

Burton sat down with The Daily Show’s Trevor Noah to discuss his feelings about not being chosen as Alex Trebek’s successor, and what he plans to do next. It is an incredibly engaging exchange. You can tell why so many people rallied around Levar. He is a humble, kind, warm man. His mere presence emanates a calm and confident demeanor you hope to find in teachers and role models.

The most encouraging aspect of the interview is that Levar Burton has come to peace with the fact that he will no longer host Jeopardy. Not only is he OK with it, but he’s also found that the opportunities he’s being presented with for not getting it are even more enticing. This quote from Burton is featured in the tweet below, but it’s worth putting here as well.

“When you set your sights on something, they say be careful of what you wish for. Because what I found out is that it wasn’t the thing that I wanted after all.”

All is not completely lost for those hoping to see him host his own game show. Burton mentions that his production team is already trying to develop a game show he can call his home. Ideally, something that revolves around literature. Count me in.

“When you set your sights on something, they say be careful of what you wish for. Because what I found out is that it wasn't the thing that I wanted after all.”@levarburton opens up about his “Jeopardy!” saga and the new game show he's cooking up. pic.twitter.com/IPywwJGNFi

← The 'Succession' 3 Trailer Goes 'Full @#$ing Beast' | Reddit Asks the Question: 'What Kids Movie Has No Right Being As Good As It Is?' →