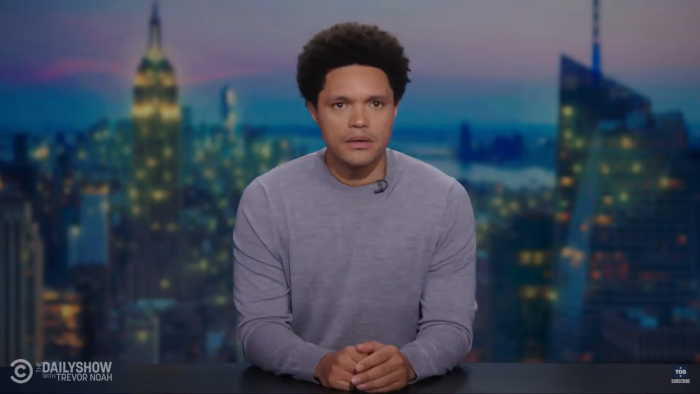 The death of Cinematographer Halyna Hutchins was an avoidable tragedy. Movie sets, when run properly, can be some of the safest places imaginable. In the case of the movie Rust, safety was allegedly not a top priority. Now, with people trying to find out how all this happened, Trevor Noah asked the question on a lot of people’s minds: Why was there live ammo on a film set to begin with?

It seems like it would be common sense to not use live ammunition on a movie set. As Noah points out, why not just fake it like everything else is faked? Henry Cavill didn’t wear a cape when he played Superman, Zack Snyder added it later. When Josh Brolin played Thanos, he didn’t dye himself purple, and boy did he want to! Instead, he wore a suit made of ping pong balls and you’d never be able to tell the difference. Perhaps the best, and most relevant example was highlighted by our own Mike Redmond on Twitter just the other day.

Every single gunshot in the most gunniest gun movies of all time is fake. And you'd never goddamn know it!

This is also, unfortunately, not the first time someone has been shot and killed on a movie set. You’d think that people would have learned their lesson. From the looks of things, corners were being cut on the set of Rust. It’s all conjecture until a proper investigation is finished. The only thing we currently know for sure is that Halyna Hutchins’s death was a horrible accident that should not have happened.