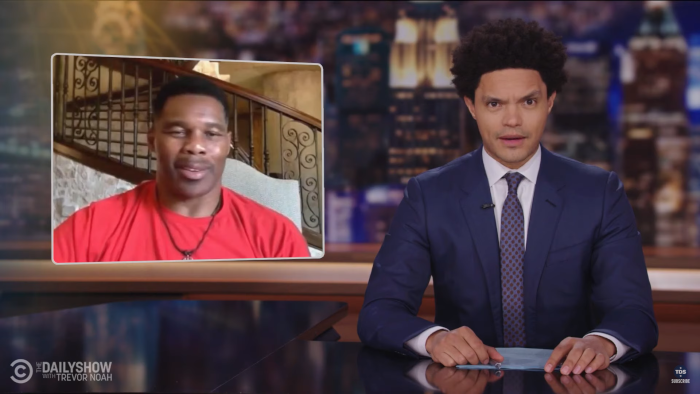 Trevor Noah Breaks Down The Many Lies Of Herschel Walker

The legacy of TFG is one of lies, hate, and violence. You’d hope, given the disaster that was his presidency, that Republicans would learn from his mistakes. Well, they have, but the thing that they learned is that they can lie and push hate and violence and end up with more wins than losses. Sickening, right?! Well, prepare to get sicker as Trevor Noah dives into the current most prominent example of this GOP lack of accountability: Herschel Walker.

Walker, a former football star and current deadbeat dad is a self-described moron who has the moral fortitude of an oil baron. Everything he claims to stand against he seems to be actively participating in. He claims to be against absentee fathers, yet he hid the fact that he has a ten-year-old son whom he didn’t raise. He has a zero-exception stance on abortion, yet paid for one in 2009. He’s a walking, talking contradiction, so of course, Republicans are placing all their chips on him to win a senate seat in Georgia.

That is TFG’s legacy. Pandora’s box has been opened and inside it is a bunch of hate-mongers with no empathy. They lean into their awfulness (see Desantis) because they saw how well it worked for TFG. Hell, the nation watched as his supporters attempted a violent insurrection and almost nothing has changed. There was no wake-up call or course correction. Instead, they are doubling down.

I would love to think that this evidence against Herschel Walker would hurt his chances. More has come out even since this segment. But we live in a world where lies are more valuable than the truth. That isn’t entirely TFG’s fault, but he sure as hell made it worse.