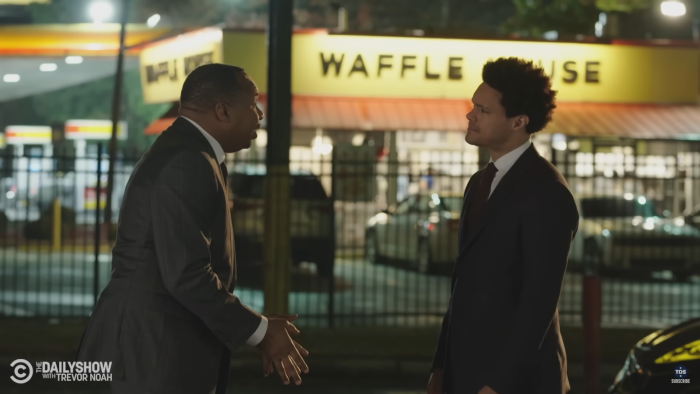 Trevor Noah and Roy Wood Jr. Fight Outside of a Waffle House

Trevor Noah is leaving The Daily Show in December. Getting out before what should be … interesting midterms seems like the smart move. He’ll only have to cover that garbage fire for about a month. The question remains, what will his next move be? If we can take anything from this newest sketch featuring Noah and his potential replacement Roy Wood Jr., it’s that Trevor should do more acting!

The setup for this bit is straightforward. Trevor is going to the first Waffle House he’s ever been to and Roy wants him to have an authentic experience. He makes Noah wait outside, at 2 AM, hoping to see a beatdown. Eventually, the two end up being the ones doing the fighting, all while being recorded by a strange onlooker (more on that in a moment).

This could’ve been a throwaway bit, a silly sketch that gets swallowed up by the Youtube-scape. But Noah and Wood Jr. bring the goods here! They both take it deadly seriously, which makes it feel tense. Either they memorized their lines or did some fantastic improv because the delivery feels real. It also appears to be shot on location and looks fantastic!

Part of the bit is that Roy suggests recording a fight so they can post the video to go viral. Someone ends up filming them instead, and it’s none other than a badly green-screened Tyler Perry. Because the sketch looks so wonderful, Perry stands out like a sore thumb. I can only assume that Perry insisted on setting up the green screen, filming himself, and writing his own dialogue. Don’t want to get any other pesky creatives involved!

Despite the truly strange cameo, it’s nice to see Roy and Trevor have fun and do something silly before Trevor takes off to explore NYC with Dua Lipa or whatever he’s up to.


← Elon Musk's Futility Is One of the Internet's Last Remaining Joys | Be Enchanted By The Trailer For Disney's 'Disenchanted →
Header Image Source: Comedy Central
Most Viewed