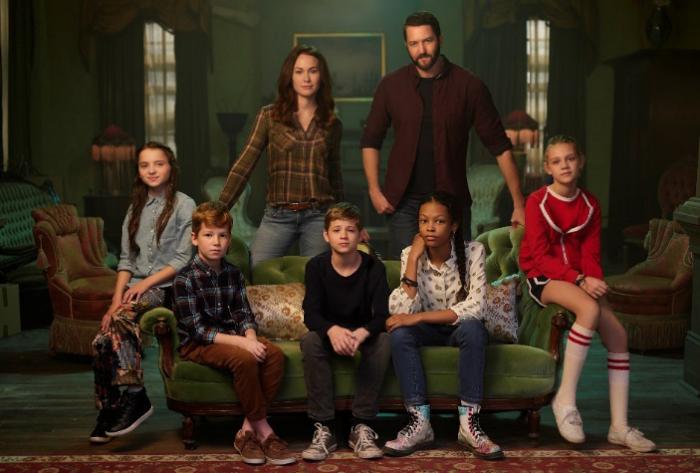 What If 'The Haunting Of Hill House' For Kids, Plus The Latest From Hugh Jackman, Kate Winslet, And (Checks Notes) Jeremy Piven

Whether you’re searching for something spooky and fun, a true-crime deep dive, a chilling drama, romantic sci-fi, or musical numbers with a generous dose of devotion, we’ve got you covered in our latest trailer round-up.

Secrets of Sulphur Springs The first five episodes are coming to Disney+ on February 26. New episodes will hit each Friday through April 9.

Want a show that’s spooky but family-friendly? Then check out this Disney offering about a haunted hotel, and the kids who are dead-set on learning its secrets.

You’ve heard about Felicity Huffman and Lori Loughlin’s involvement in this scandal, where it was revealed rich parents shelled out major cash to cheat their kids’ ways into top colleges. Well, Chris Smith, the documentarian behind Fyre, is going past these headlines to look at Rick Singer, the con man who made it happen.

Everything you’ve heard is true. But you haven’t heard everything. Using real conversations recreated from FBI wiretaps the filmmaker behind Fyre brings you Operation Varsity Blues: The College Admissions Scandal pic.twitter.com/kwsqTCSkqq

Jeremy Piven is back as a real estate developer who returns to his Irish neighborhood outside of Philly, helps the family business, and reconnects with his childhood crush, played by Taryn Manning. Uh. Manning is 13 years younger than Piven, but I guess it’s not Mank-level age-f*ckery?

A Week Away: Coming to Netflix on March 26.

Ready for a musical about summer love at a church camp? Kevin Quinn and Bailee Madison co-star.

In this Craig Zobel-helmed limited series, Kate Winslet stars as a small-town Pennsylvania detective who investigates a local murder while her life falls to ruin around her.

Blumhouse Television has created a four-part docuseries a about streak of vicious murders, a strange cult, and an American town with a sordid history caught in the grip of the 1980s Satanic Panic.

Reminiscence Coming to theaters in the US on September 3 and on HBO Max for 31 days after release.

Pushing Daisies/Westworld writer Lisa Joy makes her feature directorial debut with a romantic sci-fi thriller starring Rebecca Ferguson and Hugh Jackman. The premise is a lot to take in, so here’s the official version:

Nick Bannister (Hugh Jackman), a private investigator of the mind, navigates the darkly alluring world of the past by helping his clients access lost memories. Living on the fringes of the sunken Miami coast, his life is forever changed when he takes on a new client, Mae (Rebecca Ferguson). A simple matter of lost and found becomes a dangerous obsession. As Bannister fights to find the truth about Mae’s disappearance, he uncovers a violent conspiracy, and must ultimately answer the question: how far would you go to hold on to the ones you love?

← Shailene Woodley Doesn't Care About the NFL, but Her Dog Is Impressed with Her Fiancé's Ball-Throwing Skills | Conan Will Be The Last Talk Show Host To Receive The COVID-19 Vaccine →