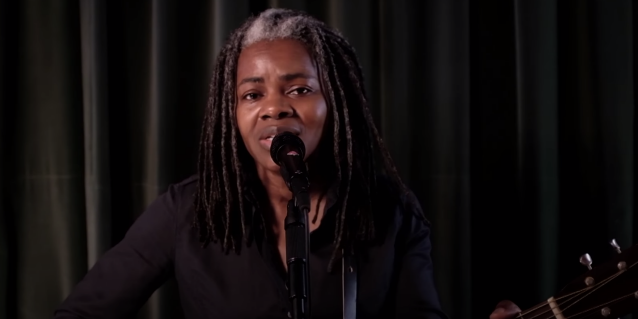 Tracy Chapman, a 'Veep' Reunion (Among Others), and Trumpty Dumpty Will Help While Away the Minutes

I love, love, love Tracy Chapman, in part because the late ’80s weren’t exactly a bastion for protest music. We had pop-metal, Vanilla Ice, New Kids, MC Hammer, and then we had the closest thing to our Bob Dylan, Tracy Chapman (We also had Susanna Vega and Edie Brickell, so it wasn’t all bad). One of the fun facts I love to repeat about Chapman is that she was discovered by the guy who wrote Rounders when they were going to Tufts together and she was playing in my old stomping grounds, Davis Square (Brian Koppelman’s dad was a huge record exec, and Koppelman basically facilitated Chapman’s first record deal, although she did graduate first!).

Chapman doesn’t make a lot of television appearances these days, but the night before the election she surfaced to perform “Talkin’ ‘bout a Revolution”.” It’s a little strange that she would do that on Late Night for (essentially) Joe Biden — not exactly Mr. Revolution — but it was great to see and hear her again, and we’ll take all the help we can get.

“Give me one reason” to vote? I’ll give you two: Donald Trump has been “telling stories” for four years and democracy is at a “crossroads.” It’s time for a “new beginning” so get in your “fast car” and head to the polls.

(I am not proud of that)

Elsewhere, all the shows had overlapping reunions for an election day message to those who have not yet voted.

I take that back. It was not all the shows because John Lithgow and Joseph Gordon-Levitt had a Third Rock from the Sun reunion, of sorts, when JGL’s HITRecordJoe community created a short video for Lithgow’s poem, “Trumpty Dumpty Wanted A Crown.”

Meanwhile, on the other side of the political spectrum.

Lil Pump takes the stage at the Trump rally shortly after 1amET on Election Day. Trump introduces him as "Little Pimp" pic.twitter.com/cS7yqT7c5Q