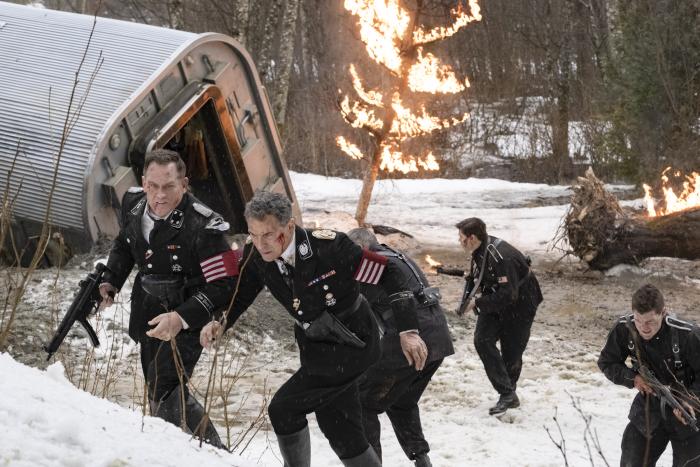 The first season of Amazon’s Man in High Castle was thoroughly mediocre but built on such an intriguing premise and contained so much potential that the series earned a second, and a third, and a fourth season based on the promise of a good series. The potential for the series, unfortunately, never materialized. In fact, mediocre became muddled and then messy before rebounding in the final season to once again achieve mediocrity with a cherry disaster on top.

Based on Phillip K. Dick’s novel, Man in High Castle takes place in an alternate universe where Hitler and the Nazis won World War II. In this universe, the Reich controls the East Coast, Japan owns the West Coast, and there’s a neutral zone in the Rocky Mountain area that is never successfully utilized in the series. We finally get to see what the East Coast might be like if it were controlled by white supremacists! Ahem. The Man in High Castle (Stephen Root), meanwhile, creates films set in other universes where the Americans won the war and he spreads these films reels around to stoke the resistance movement. This knowledge, however, is never used particularly well. The Nazis also control a portal to other universes, and they have loose plans to spread the Reich into other dimensions. The portal is never utilized particularly well, either.

The original idea for The Man in High Castle was a simple, four-part miniseries for SyFy. That’s about how much worthy content there is in 40 episodes of the series. It’s five to six hours of story and 34 hours of filler. Four seasons and several showrunners later, the story ends up being largely about John Smith, an SS Obergruppenführer who — by the end of the series — is promoted to Reichsmarshall of North America. Basically, he is the President of the American Reich, which has gained its independence from Nazi Germany. He’s played by Rufus Sewell, and while he’s easily the best actor on the series, it is a little discomfiting to center the story on a Nazi.

The thing about John Smith, though, is that he has access to the portal to other dimensions, and he’s seen films of himself in all these other universes, and in all those other universes, he’s a good man, a great father, and not a Nazi. I’m not sure how effectively the series does it, but the point in this final season is to suss out how a man can be permanently transformed by white supremacy, and how impossible it is to change paths once a person has gone far enough down it.

This is what happens: John Smith rises to the President of the Reich in North America by killing Hitler’s replacement, Heinrich Himmler, as well as J. Edgar Hoover (who operates the Nazi version of the FBI), both of whom were angling to take out Smith. Smith takes full control of the North American Reich, striking a deal to separate the American Reich from leadership in Germany. Meanwhile, the Japanese abandoned the West and went back home after the Black Communist Rebellion takes over.

John Smith, meanwhile, has learned nothing from the better versions of himself in other dimensions. In this universe, he plans another Holocaust in the West, making plans to set up concentration camps and kill off Jews, Blacks, Native Americans — basically, anyone who is non-white. John’s wife, Helen, however, is like, “This has gone too far! It was bad enough when my son Thomas had to have himself euthanized because he had a form of Muscular Dystrophy and was used by the Reich as a symbol of patriotism, but another Holocaust? No thank you!”

So, Helen gives Juliana Crain (Alexa Davalos) a ring. Juliana used to be the nominal lead of the series. By this point, she and Wyatt (Jason O’Mara) are just plot devices used by Helen to stop her husband from starting another Holocaust. Using intel from Helen, Juliana and Wyatt manage to crash the train that John Smith is on, killing Helen and leaving John injured. Juliana approaches John at gunpoint. John cuts her off and says wistfully, before blowing his own brains out: “It’s unbearable to be able to look through that door and glimpse all the people you could have been and to know that, out of all of them, this is the one you became.”

With John Smith dead, his next-in-command calls off the attack on the West, and the series sort of ends on an unsatisfying note: Yes, the Black Communist Rebels will be able to hang on to the West (for now), but the Nazis still control the East in this universe. History isn’t undone. Nazis still control most of the world, but hey! At least there won’t be another Holocaust!

Meanwhile, Chief Inspector Takeshi Kido — basically the only figure left in the series from the Japanese-controlled West — finds his humanity enough to join the Yakuza in order to save his son’s life (who has debts with the Japanese mafia), while Robert Childan — the antique store owner — sells his store for passage to Japan to be with his Japanese wife, who returned before the Reich invasion. And that’s it: By season four, only a few of the series regulars remain: Juliana, Wyatt, John and Helen Smith, Robert Childan, and Takeshi Kido. Almost everyone else died in season three.

However, the Man in High Castle himself does return briefly for the inscrutable ending. After John Smith dies, the resistance takes over the portal to other universes, and mysteriously, people begin to casually walk through the portal from other universes, strolling indifferently past Juliana and others, while The Man in the High Castle strolls into the portal into other dimensions. 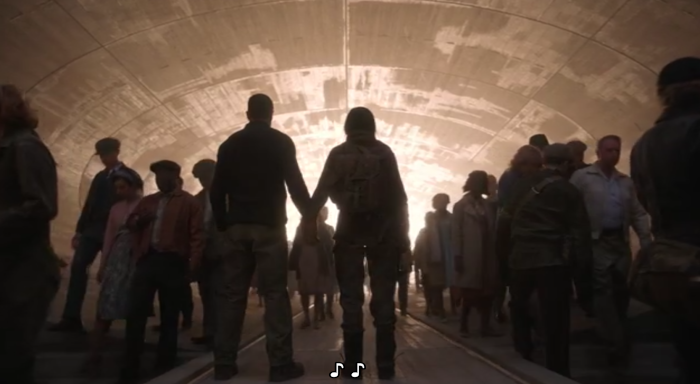 What does it mean? According to the showrunner, via EW:

“What should be clear to any viewer is that the portal is, essentially, open and it is going to remain open. In effect, what that means is two worlds have become one. There’s a doorway from one world into the next, and now people can move freely between them. What does that mean? You have ordinary people, in some interpretations, who have been called to this event, who are moving through the portal, and these two worlds are going to be fused.”

In other words, it’s total nonsense. Complete garbage. It’s not even logically consistent because, before this moment, one could only pass through to another universe if the version of herself in the other universe was dead. Now people are just casually strolling back and forth between a Democratic America and a Nazi-America, and this is supposed to be a happy, hopeful ending? Sure, the two universes can exchange positive discoveries with one another, but they can also exchange Nazi control! And what if different versions of the same person start killing each other in order to take their place in the better universe? It’s unworkable rubbish, but since the series has ended, the show won’t have to answer for its inanity. 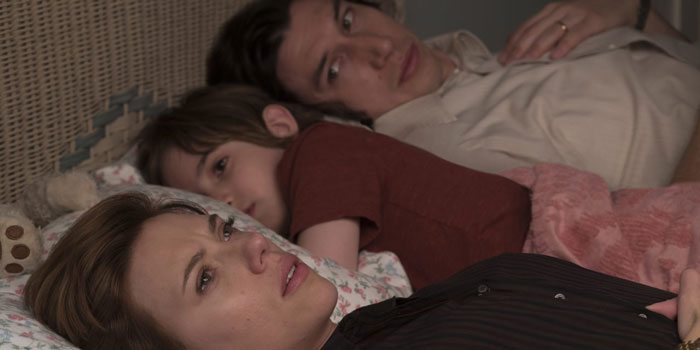