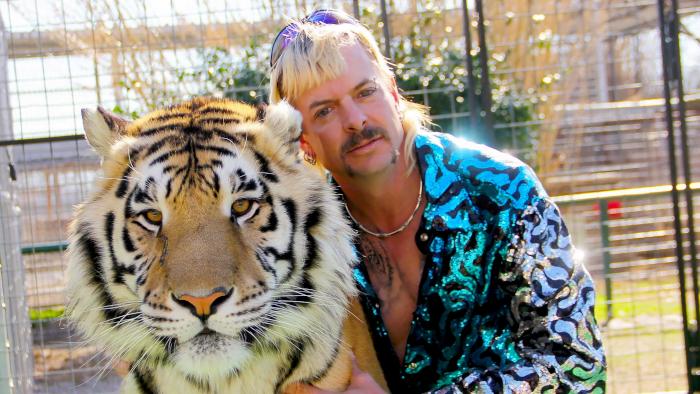 Have you been watching Tiger King on Netflix? It feels like everyone on Twitter has rallied around this especially odd true-crime documentary series during this equally odd period of self-isolation. If you were in need of something that seemed tailor-made to distract you from the outside world’s horrors, a peek into a world even stranger than the one we’re currently living through, then the can’t-look-away tawdriness of Joe Exotic was calling your name. I marathoned the entire thing in one sitting.

Netflix has developed a fascinating niche for themselves in the genre of true-crime. The currently undisputed behemoth of streaming services has spent billions of dollars trying to keep up with the traditional Hollywood studio system in terms of epic TV series and lavish cinematic productions, but the thing that keeps audiences hooked time and time again is a much more cost-effective affair. Their output emerged at just the right moment in time, with the first season of Making a Murderer dropping in the midst of the modern true-crime revival sparked by the wild success of NPR’s Serial. True-crime has never been a genre of film, television, or literature rooted in emotional legitimacy, a few notable exceptions aside, but over the past five or six years, it has received a new lease of life. While we still have our endless episodes of Forensic Files and those yellow-page battered paperback books dedicated to the sickest of real-life murders, true-crime has gotten noticeably slicker, produced with a greater aesthetic quality, and it’s been heartily welcomed by the masses without shame. No longer does it carry the unmistakable weight of disrespect, regardless of how well-meaning said story is. Well, that’s not entirely true, of course. Companies like Netflix just got better at hiding it.

Tiger King isn’t just critically beloved and commercially successful (we assume — as with all Netflix shows, the true viewership numbers aren’t revealed to the public); it’s now a social media phenomenon, one that the streaming service has embraced. They’re joining in on those Twitter memes, and that’s not the only way the series has seemingly taken over the world. As detailed by Amelia Tait for Wired, a whole marketplace of Joe Exotic merchandise and Etsy shop-fronts sprung up seemingly overnight, selling everything from socks to stickers to prayer candles. In the piece, Tait talks to Jane Kirtley, a professor of media ethics and law at Hubbard School of Journalism and Mass Communication, who describes her issue with the ‘documentary’ label as it applies to the show. This is an issue of telling the truth and not violating your viewers’ trust, ergo ‘if you’ve got a character who’s really reprehensible, then I think you have an obligation not to create the impression that they’re actually some kind of anti-hero.’ In that aspect, Tiger King has most certainly failed, but it is not alone among Netflix’s true-crime roster in that regard.

Watch any number of Netflix true-crime series in a row and you’ll see patterns emerging, especially in terms of structure and style. These productions are slicker than oil, shot like prestige TV in a way that instantly makes the viewer feel more comfortable with whatever gaudy subject is being discussed. It’s a clever way to conceal Netflix’s biggest crime with the genre: The built-in meme-ification of its output. Think of every Joe Exotic joke you’ve seen over the past fortnight, or the weird sex symbol status bestowed on the lawyers in Making a Murderer. The truly reprehensible Don’t F**k With Cats spawned a whole host of gags about Luka Magnotta, while Ma Anand Sheela, the convicted criminal featured in Wild Wild Country who pleaded guilty to attempted murder, became a folk-hero.

Once again, this is not unique to Netflix, but it is worth noting how the platform’s creation-by-algorithm formula seems tailor-made to create true-crime series that favor meme-ready melodrama over true declarations of information. One reason Tiger King is so easy to meme, subject matter aside, is because the format invites it. This is a series that wants you to laugh at and feel superior to these people without ever fully interrogating the awfulness of the accused’s charges. The way people are framed, speaking to deliberately odd or laughable backdrops, begs for a screencap or gif to go viral. There is more attention and subscriber numbers to be mined from this remolding of true-crime as the ultimate binge-watch than as a platform to explore the facts. If the intent is to entertain rather than inform, can it really be true-crime?

Memeing your content is a way to get viewers hooked. Netflix do this a lot with their content, from flash-in-the-pan Bird Box to Oscar-prestige drama The Irishman. It’s an extension of how the internet typically does business, only now it has a corporate mandate and operates as a marketing tool arguably more effective to its core demographic than traditional advertising. The end result is a curious dichotomy of style and intent: Lure people in with the jokes and watch them stay for the carefully crafted sensationalism.

Tiger King is especially guilty of this because it has chosen an angle to stick to in its presentation of a true story: Tar everyone with the same brush of irresponsibility and pretend that there’s no bias in that argument. Of course there’s bias. There’s a reason a literal animal killer like Joe Exotic is the hero of this story and not Carole Baskin or any of the G.W. Zoo’s employees. If the makers of Tiger King didn’t want viewers to warm to Joe Exotic, they wouldn’t have cut out his displays of unavowed racism. They would have dug into the predatory nature of his relationships with much younger, drug-addicted men instead of spinning them as pseudo-comedic. Instead, the present a spectacle of classism, misogyny, and queerphobia, then dress it up in a way that invites the viewer to ‘ironically’ deify its central figure. As long as the memes are funny, who cares, right?

When director Cary Joji Fukunaga was asked about his Netflix mini-series Maniac, he talked candidly about how Netflix’s studio notes were rooted in their experience with their mysterious algorithm. He told GQ:

‘Because Netflix is a data company, they know exactly how their viewers watch things. So they can look at something you’re writing and say, We know based on our data that if you do this, we will lose this many viewers. So it’s a different kind of note-giving. It’s not like, Let’s discuss this and maybe I’m gonna win. The algorithm’s argument is gonna win at the end of the day. So the question is do we want to make a creative decision at the risk of losing people.’

Netflix has a delivery vehicle for what content they want, how they want it to be presented, and how they plan to sell it to the world. When something works, like Making a Murderer, they want more of it, regardless of any ethical or creative questions that may have arisen. There’s a reason the platform kept renewing and elevating 13 Reasons Why, even as they were pilloried for essentially romanticizing suicide in the most violent manner possible. People like to watch this and I’m sure Netflix will point to those (highly questionable and impossible to verify) numbers as proof that they are merely giving audiences what they want. That doesn’t absolve them of criticism or justify the meme-ready nature of their true-crime presentation. Real-life doesn’t need any more twisting of the truth to suit the purposes of the bad guys.

← 'SNL' Is Back, and The Cuomo Brothers Are At It Again | 'Modern Family' Is Finally Over; Here is How It Ended →