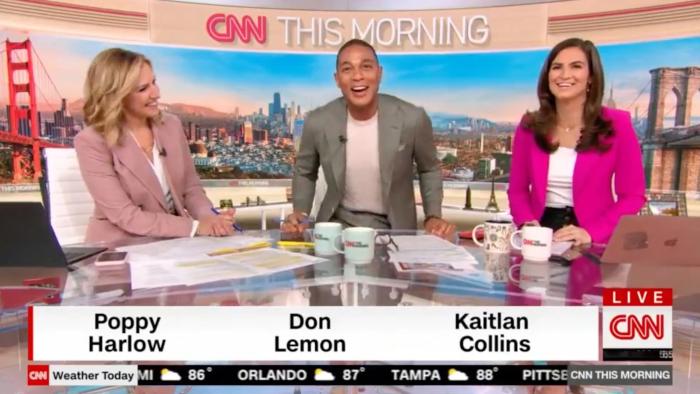 This New CNN Is Not Working

After four years of going HAM on the former President, Jeff Zucker exited CNN earlier this year amid HR violations (he was probably on his way out anyway) and CNN decided to go in a new direction to differentiate it from the conservative Fox News and the left-leaning MSNBC. They brought in a good guy in Chris Licht, who had developed Morning Joe over on MSNBC before taking over as showrunner on Stephen Colbert’s Late Show and turning it into the top-rated show in late night. Licht, however, may have misfired in his strategic thinking.

The idea was not to make CNN more conservative or more liberal, and not even necessarily to straddle the middle. The idea was to cultivate a reputation as an “objective, trusted” news source. Licht couldn’t do that when certain personalities were picking fights with Fox News (Brian Stelter) or sharing their personal political opinions while reporting on the news from the White House (John Harwood).

CNN basically wants to be the Jake Tapper news network — Tapper was recently given a 9 p.m. primetime slot that he does not want (he’ll return to his afternoon spot after the midterms), temporarily filling a spot that CNN hasn’t been able to figure out since the exit of Chris Cuomo, whose termination for sexual misconduct prompted CNN’s transformation. I like Tapper. I like an anchor who can mix the news with civics, but Jake Tapper (and Anderson Cooper) is who you go to when you want to find out what’s happening during a hurricane or when a national figure has died or when a President is being impeached. Tapper is a good “major news event” anchor, but most days do not involve “major news events,” at least as they are defined in 2022.

Most days, it’s politics, and people who watch the news are the ones most interested in politics. In today’s climate, an “objective, trusted” political source is not a thing. When it comes to politics, everyone thinks they’re right, and when it comes to cable news, they watch to have their political opinions reinforced.
It’s why Sean Hannity and Rachel Maddow are so successful. Maddow is a smart, brilliant journalist, but she also knows what her audience wants to hear: Maddow talk sh*t about Republicans. She does deep dives on issues that sound really important right before bed (but usually evaporates before morning). Democrats have their problems but they’re not interested in hearing about them at 9 p.m. They want to hear about how badly the GOP is f**king up the country, and vice versa.

Political junkies — the people most likely to watch cable news — want something to be outraged about. They want new information that can be used as a cudgel against the other side. They want a jolt of dopamine. If the facts support their side, that’s great, but they’d like some validation for that. Don’t just tell them what they already read in the NYTimes or on Twitter and move on to the next story. Political junkies — again, the people who watch cable news — already know that stuff. They tuned in to cable news to find something deeper and more substantive than a tweet.

It’s not likely to come from their new morning show, CNN’s This Morning, hosted by Don Lemon, Kaitlan Collins, and Poppy Harlow. The three are good at what they do, but putting them together takes away their individual strengths. I’ve watched some of This Morning this week. It’s like the Today show after it had the life strangled out of it. The ratings have been a disaster — the first episode came in lower than the previous incarnation of their morning show — and Fox News has been rubbing their noses in it.

Repeats of “Young Sheldon” and “The Big Bang Theory” on TBS, ESPN’s “Around the Horn,” decades-old reruns of “Gunsmoke” on INSP and “The Andy Griffith Show” on TV Land and TLC’s “Little People, Big World” were among the basic cable offerings on Monday that had larger audiences than the debut of “CNN This Morning.”

I dislike morning programming over on Fox News, but I’ll give it this much: It’s not anodyne. Even the small talk is fueled by culture war bullsh*t. I can’t watch for more than five minutes before my head explodes. But wouldn’t it be nice if the left had a morning show that wasn’t hosted by a former Republican and supporter of the former President that would make the right’s head explode, too? Why can’t the Democrats put out a popular morning show where the anchors express self-righteous disbelief about what the GOP and their voters are doing to the country? That’s certainly not CNN This Morning, and while Morning Joe has a lot of problems, at least it raises the blood pressure of its viewers.

CNN This Morning is of a different era, of cozy mornings with a cup of coffee and a crossword. Look at Don Lemon’s outfit this morning, which screams, “Come have brunch with us.”

.@donlemon dances to the wrong fight song. @kaitlancollins: "That's Alabama's fight song!"@PoppyHarlowCNN: "I like how the controlroom is making me read this tease!" pic.twitter.com/g77JlZxx9a

Maybe after the midterms, the country won’t be as intensely interested in politics. Maybe they’ll want to see Don Lemon and Kaitlan Collins gently yuck it up over college football (Collins knows her sh*t, so for Lemon’s sake, I’m glad they didn’t get into it too deeply). I don’t think that’s the world we live in anymore.

I think Chris Licht wanted to create a news network for the world he wants to live in instead of the world we actually live in. The numbers on these cable news morning shows are not huge — even Fox News, which gets quadruple the ratings of CNN, taps out at around 1.5 million viewers. But who are those 1.5 million viewers? And the 800,000 viewers who watch MSNBC? They are people invested in the news so much that they are willing to watch cable news at 7:30 in the morning. If they are that invested, they probably already know the headlines. They want the commentary. And CNN’s neutral, unobjectionable, unremarkable Wolf Blitzerian patter and Don Lemon’s morning chit-chat ain’t gonna cut it. The old CNN had a lot of problems, but at least it felt like they were occasionally fighting the good fight. This CNN? It’s elevator music for your morning bagel.