After the series finale of Kiling Eve, and the series finales of The Walking Dead and Better Call Saul later this year, it may become harder to justify that $9 a month subscription to AMC+ (particularly for those who already receive AMC in their cable packages).

I have, however, appreciated their programming strategy outside of The Walking Dead spin-offs (which, admittedly, I also watch). The streamer tends to gravitate toward less pricey sometimes riskier series, which they often co-produce with international networks. The very violent Gangs of London from Gareth Evans (The Raid) is great, Ultra City Smiths is wonderfully kooky (and what I hope is the beginning of a partnership with creator Steven Conrad), and I have enjoyed, to various levels, a few of their other more staid UK series: Kin, The Beast Must Die, and Ragdoll. This summer, the streamer is also making a big push with Dark Winds and Moonhaven to sustain itself in between seasons of The Walking Dead shows.

The push also includes This Is Going to Hurt, and outside of the Breaking Bad universe, the Ben Whishaw series is the best thing AMC has been involved with since Mad Men. The seven-episode series based on the Adam Kay memoir is about the brutal challenges of working in a public hospital in Britain, where the healthcare is free but the medical professionals are painfully overworked and brutally underfunded.

The dismal state of public hospitals in the UK is a compelling news story, but This is Going to Hurt marries that with the intensely personal lives of the doctors, focused largely on Ben Whishaw’s Adam Kay, a junior doctor working in the obstetrics and gynecology ward in a London hospital. He’s a skilled doctor, but the strain of the position is getting to him. The premiere opens with Kay waking up in his beater of a car (junior doctors are also badly underpaid), having fallen asleep at the end of his shift, only to wake up in time for his next. His patients are numbers — he literally keeps a running tally of the number of babies he’s delivered on a piece of paper in his locker — and he’s so badly underfunded that at one point he has to pull a dirty pair of someone else’s scrubs out of a hamper because he’s run out of credits for the scrubs vending machine (this is a thing, apparently, even in America). Kay is grump, short with residents, and the typically natty Whishaw looks as though he’s just crawled out of his own grave after an alarm clock woke him from the dead half an hour after he succumbed to sleep deprivation.

The perpetually blood-spattered Kay is exhausted beyond the pale but content enough to ride it out in a zombie-like fashion until his time as a junior doctor has passed and he can become a better-paid consultant. That changes, however, when he sends a woman who seems like a hypochondriac home before performing even routine tests on her only to see her return a few hours later in labor at 25 weeks because of preeclampsia. He delivers the premature baby, and his boss barely saves the mother’s life, but the patient and her baby continue to haunt him, even as he spends much of his little free time sitting bedside with the premie, who doubles as Kay’s sounding board throughout the season. 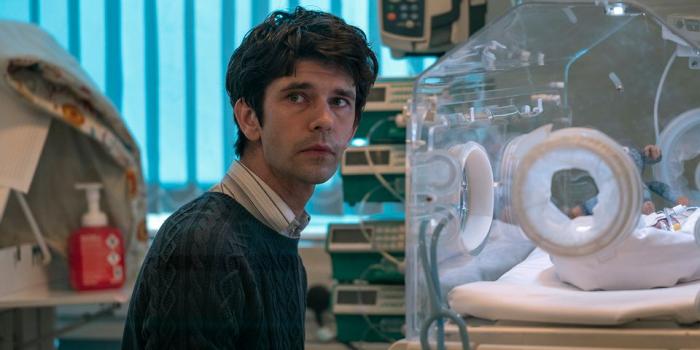 In addition to the insane hours, the trauma, and Kay’s addiction to his work, he also has to contend with his long-term boyfriend (the very handsome Rory Fleck Byrne), whom he barely sees, and even when he does, he’s too exhausted to make the most of it. He has a troubled relationship with his mother, while he’s also trying to train an overworked resident, Shruti Acharya (Ambika Mod), who has myriad struggles of her own including putting in the same hours as Kay while also studying for exams.

This Is Going to Hurt is a genuine, unflinching look at what it means to work inside a UK public hospital, but it’s not altogether bleak. There’s a lot of dark humor and pathos to enliven the harsh reality, and it’s almost impossible not to root for these underdog doctors and nurses who are given so little and asked of so much. There’s a lot of heartbreak, but also a few moments of joy, while Whishaw and Ambika Mod are so captivating that the 45-minute episodes feel like 15. It’s a remarkable series not just for what it says but for how it says it, but most of all, for how it so effectively highlights the real human stakes involved in medicine. This is not a show about attractive doctors fucking in a broom closet. It’s about what it looks like when the healthcare system all but abandons the people it needs the most.

This Is Going to Hurt currently airs weekly on AMC+.


← Stranger Things: A Definitive Ranking of Kate Bush's 'Running Up That Hill' Covers | 'Barry' is Walking Backwards into the Darkness →