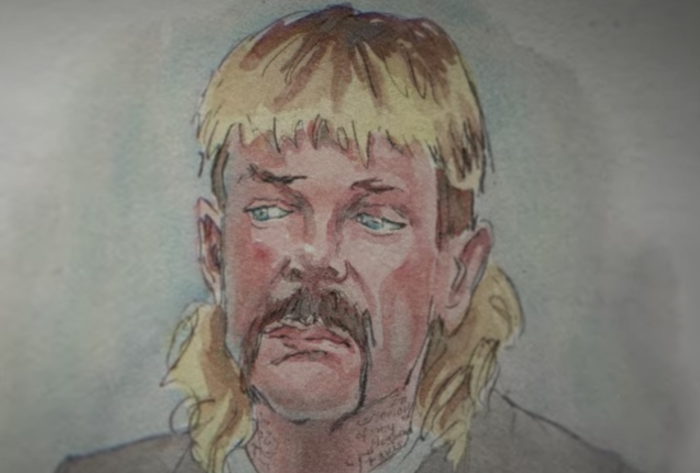 There’s No Way Joe Exotic Was Set Up. You Just Don’t Like Carole Baskin

We’re here today to address the elephant in the room. No, I’m not talking about the literal elephant Doc Antle rode around on in Tiger King because he’s an insufferable a*shole who uses exotic, large animals as props. We’re here today to address the figurative elephant in the room—the contingent of people who watched Tiger King and decided to side with Joe Exotic because they believe he was set up and never would have really tried to have Carole Baskin killed, a woman he antagonized on the internet for years, going so far as to tell her that he wanted her head in a jar, shooting dummies he called Carole with live ammunition, and reading her private diary entries on his web show.

Yes, friends, we’re here today to debunk Joe’s contention that he was set up, and that he never intended to have Carole Baskin murdered. By the end, hopefully, the depths of Joe’s stupidity, depravity, and yes, misogyny will become apparent, and you too will fully believe that his ass is exactly where it belongs: prison, where is he currently serving a 22-year sentence because he was convicted for hiring someone to kill Carole Baskin in addition to murdering five tigers that were in his possession. Sorry, Cardi B.

Bout to start a gofundme account for Joe .He shall be free.

First, though, a note—Tiger King is what’s getting some of us through this dark time right now, and yes, I agree, the animal exploitation and abuse is not explicitly called out enough in the docu-series, opting instead to take a “look at these a*sholes” approach. However, just because some of us want to talk about Tiger King doesn’t mean that we are condoning or brushing off the abuse these animals suffered, and continue to suffer, at these bulls*it private zoos. They are abhorrent and need to be shut down. I don’t think anyone who reads these articles would disagree with that statement. We just want to talk Tiger King so we forget the world is burning down around us right now, because at least for me, that’s how I’m coping on some level.

With that said, let’s get to the reasons why Joe Exotic is not innocent.

I have to LOL at this argument that was presented in the doc, because, friends? No reasonable person would hire a rando off of Craigslist to work with big cats! No reasonable person would hire said person, and pay them only $100 a week, which is $5200 a year, to handle big cats. When you put it into that context, Joe Exotic is not a reasonable person, is he? Joe paid his supposed hitman, Allen Glover, $3000 (after offering $5000 … but only being able to come up with $3k) to kill Carole Baskin. That’s more than half a years’ worth of wages for a worker at his zoo. This is a man who fed people expired meat that came in off a truck in his restaurant. He’s cheap as s*it! $3000 is a very stupid price to pay a hitman if you actually want the hit to occur, no one disagrees. That’s why Joe’s dumb ass got caught, tried, and convicted. His actions are not those of smart or reasonable person, are they?

Look, I do not believe Jeff Lowe is innocent by any means here—but by all accounts, Joe Exotic is the one who hired the hitman (both hitmen…more on that in a moment) and put the plan in motion. Jeff Lowe admits in the final episode of Tiger King that he was in Exotic’s ear, egging him on the entire time and helping to facilitate the murder-for-hire plot, but he, and the prosecution, and a jury of his peers agree, Joe was the one who put the plan in motion.

Myth 3: The Evidence Against Joe Was Thin

Regardless of how you feel about Joe’s level of involvement in the murder-for-hire plot (hold that thought), Erik Cowie, his employee, witnessed Joe Exotic shooting adult tigers to death, which Joe was also convicted for. There’s no way he’s innocent of that.

Per a contemporary local news report:

“I knew what was going on, I’m not stupid,” said Erik Cowie.

Cowie worked at the Greater Wynnewood Animal Park for five years. He was the government’s first witness.

Prosecutors say Joe Exotic killed the tigers to make room for other tigers a circus owner was paying him $5,000 to board.

Cowie says he heard the gunshots when the animals were killed.

“I knew cats were getting shot,” he said after his testimony. “Because we discussed it all day or for even a day or two beforehand on the radio. ‘Are these breeders? Does this one produce cubs?’.”

Also, there’s this, per The Oklahoman:

In a recording played for jurors Thursday, zookeeper Joe Exotic agreed to pay an undercover FBI agent to kill a Florida woman and talked of using his gubernatorial campaign to create an alibi.

“Just like follow her into a mall parking lot and just cap her and drive off,” he told the undercover agent who was posing as a hit man.

Then there was a recorded call between Joe and James Garretson (the ginger, water skiing dude), where Joe outlined how he and Jeff were going to keep their stories straight, and throw Allen under the bus, if he got caught after murdering Carole. Innocent people who are getting set-up to take the fall for a murder-for-hire plot probably don’t work with others in order to get an alibi, in case their hitman gets caught, do they? (Genuinely asking, because I have never been involved in a murder for hire plot…)

In his pre-sentencing statement, Judge Palk said that Joe Exotic was “consumed, if not obsessed with silencing Carole Baskin.” He also highlighted the defendant’s ongoing lack of respect for the law: Joe Exotic had been recorded on a phone call trying to broker the sale of lion cubs while awaiting trial in Grady County Jail. The judge cited a pattern of “systematic trafficking of animals” and noted the seriousness of the wildlife crimes, which he called “significant in volume.”

Which leads me to my ultimate point—what Tiger King did a great job of, was painting Carole Baskin as a f*cking bitch. She’s the hypocrite who bred big cats for sale before she pivoted to wanting to save them all, who possibly murdered her husband, and took Joe Exotic’s parents, his parents (!!) for all they were worth, while in the process financially devastating Joe Exotic, too.

The vast majority of the doc is spent painting Joe as a misunderstood, underdog protagonist, who was just getting by on a wing and a prayer. We spend hours with Joe talking to the camera, seeing the world through his eyes, meeting his husbands, his workers, even his family, experiencing his campaign, and hearing, constantly, just what a f*cking bitch Carole Baskin is. We, the viewers, were primed to not only believe she had it coming (since it’s alluded she killed her own husband, and Joe states it as fact) but that quirky Joe could never have been at fault for it, when evil Jeff Lowe is right there, stealing the zoo out from under him, right?!

It doesn’t help that Carole is a bit aloof, quirky in her own right, and generally seems uninterested in the fact that her husband has been missing for over 20 years, and she inherited the bulk of his wealth after it was documented he intended to divorce her. Carole is not a particularly sympathetic victim, she doesn’t give us good soundbites (save for “hey all you cool cats and kittens”), I don’t recall her ever crying, tearfully on camera, which we expect from victims, and she seems to run her own cult of personality the same as Exotic and Doc Antle that relies on volunteer labor (regardless of whether this is an accurate statement or not, that’s how Tiger King portrays it). Let’s face it—Carole Baskin is not particularly likable in Tiger King, and barring that, she’s not particularly entertaining, which despite being an abusive monster, Joe Exotic certainly is entertaining.

Which is ultimately why I believe that people want to give him a pass for the trespasses he clearly committed because everyone likes an underdog, and the guy with the blond mullet, who is running his own zoo, sure comes off like an underdog when you compare him to the grifter, who doesn’t seem to work and who took the zoo out from under him, and the mean lady with millions who possibly killed her own husband, and who also tried to take Joe’s zoo from him. Especially when she doesn’t act like a victim.

Joe, however, is neither an underdog nor is he a victim. He’s a man who killed five tigers for profit. He’s a man who hired two different men to kill his rival because she believed that Joe’s zoos were predatory against the animals they claimed to protect, and because he frequently used violent imagery against her, all in the name of entertainment, which ultimately cost him a 1-million dollar settlement he could not afford. He’s the one who had his parents take control of his zoo, which ultimately led them to being embroiled in Carole’s lawsuits, not Carole. In Joe’s wake is a path of destruction he did all on his own. The only role Carole Baskin had in it, was that it was her name he was shrieking about being a f*cking bitch, as a distraction, while he continued to wreak havoc in the lives surrounding him—feline and human.

So, when you’re watching (or re-watching) Tiger King, or talking about it with the people around you, if they start to go down the rabbit hole of “Joe Exotic was set up” please share this article with them and remind them: There’s no way Joe Exotic was set up. You just don’t like Carole Baskin.