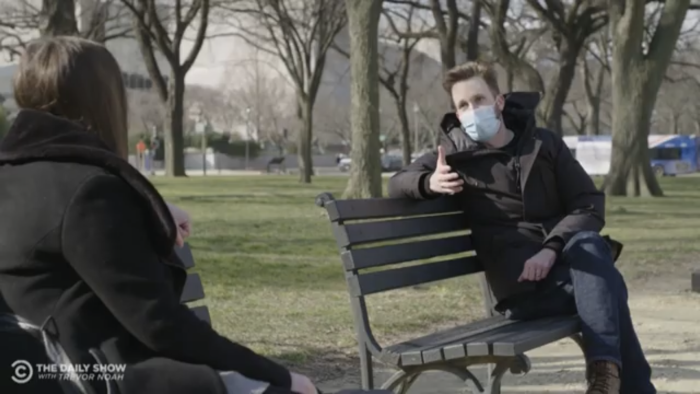 The Work Of Jordan Klepper Is Never Done

Jordan Klepper has spoken with non-politician Trump supporters more than Trump himself. He was even present on January 6th, only leaving when the situation got truly dangerous. The interviews he conducts are equal parts mind-boggling and painful to watch. I can only imagine how hard it must be for him. Yet, time and time again, he goes back out there. Now, with Trump in the middle of his second impeachment trial, Klepper is back at it.

I was comforted by the fact that he wasn’t interviewing mobs of Trump supporters this time. While his January 6th outing was phenomenal journalism, it was also frightening. It seemed, at several moments, that his life and the lives of his crew were in danger. This time, he only finds two people who are out to stump for Trump. It’s more than enough.

There’s something very chilling about the Washington D.C. that he has returned to, and it’s not just because it is clearly very cold (nailed it). There are large gates erected to protect the Capitol building, accompanied by an eerie silence. Jordan is essentially returning to a crime scene and his team depicts that in a way that feels effortless.

Anytime a new Klepper video has emerged over the last four years, I find myself filled with happy anxiety. I know that what I’m about to watch will likely evoke feelings of shock and rage and glee. There are elements of a car wreck to them, because you want to look away, but you can’t. However, most car wrecks aren’t guided by the steady hands of Jordan Klepper.

It truly feels as though Klepper’s work will never be finished. Even with fewer Trump supporters here, he still finds people to talk to and captures the spirit and energy of what we are facing. For that, I honestly respect him.

I don’t envy him. Like, at all. But I respect him.