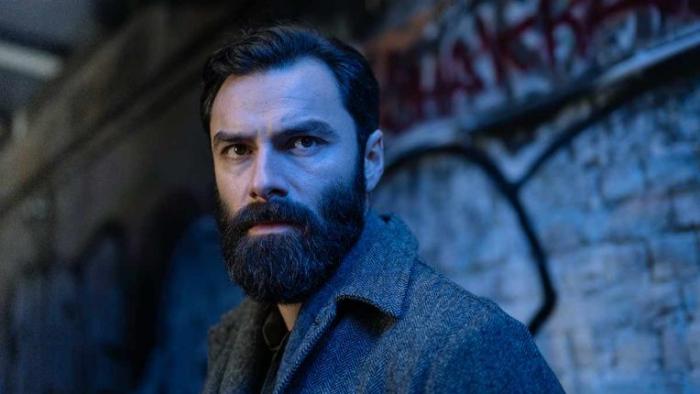 ‘The Suspect,’ a Murder Mystery with Hot People Is, Inconveniently, Not Very Good

I for one am a huge fan of smart British murder mystery nonsense. I was reared on PBS Masterpiece/Mystery, and it taught me well. So when I say this is one of the worst I’ve seen, believe me, I come with receipts.

Aidan Turner, most famously of Poldark, appears as Joe, the lead in this five-part mini-series, with an homage-to-Oscar Isaac beard, perhaps trying to go incognito as a much better actor. Joe is a successful psychologist (who interestingly enough appears to know very little about actual psychology) and enjoys the Hallmark perfect life. He lives with his beautiful wife Julianne (Camilla Beeput) and young daughter Charlie (Uma Warner), who both adore him, in a lovely London home, and he is beloved by his colleagues to the point where one of them asks him to walk her down the aisle in the place of her dead dad. He’s published pop science books that sell and which even his disapproving but loving father has to admit were good reads.

In the first ten minutes of the series, Joe saves the life of a suicidal/terminally ill kid. In that sequence, we learn a number of things about Joe: he’s just been diagnosed with Parkinson’s, which makes climbing out onto a hundred-foot ledge extra super heroic, and he’s just a fundamentally good person as well as a plucky unorthodox psychiatrist who specializes in fear.

But suddenly, one of Joe’s beautiful blonde ex-clients (who accused him of sexual assault years before) shows up murdered. Very quickly all signs begin to point toward Joe. The police detectives, DI Vince Ruiz (Shaun Parkes) and DS Riya Devi (Anjli Mohindra), swoop in with their suspicions, despite the fact that Joe points them with convincing evidence to his obviously disturbed client Bobby (Bobby Schofield), who is by far the most interesting character. The tangled web of inter-character connections spirals into ever more complicated patterns. But none of them quite land.

What does that terminal kid have to do with the rest of everything? Well. Nothing. That should have been the first red flag that the plotting was not going anywhere rewarding. But The Suspect is the kind of show where you trust that you’re being set up for something, that all these hints and weighty looks are getting ready to pay off. No such luck. The plot is as twisty and complicated as you could hope, but it’s ruined by the fact that Joe uncovers the entire conspiracy by talking to five people for about five minutes each, while the police are determinedly terrible at their jobs, deciding that every new clue means that Joe must somehow be setting up someone else because he’s just so incredibly guilty and devious and evil because…reasons.

Tense murder mystery shows are allowed to be slow. But they should be the kind of slow where little tidbits fall into place, where the noose winds tighter and tighter, bearing us closer to a deadly and terrifying truth. If they’re slow, that is, they also have to be smart. And boy oh boy, The Suspect does not tick those boxes. Most of the tension comes from absolutely every character—especially the supposedly sympathetic detectives—getting absolutely everything so infuriatingly wrong you literally find yourself exclaiming at the TV, despite increasingly having no interest in what happens to any of these characters. (Except for the adorable Charlie, who fails to materialize into an actual character because I think the writer forgot that children are also people.)

I found myself wishing that these characters were more convoluted, more secretive, more deceptive—that something at some point would actually take me by surprise. It seems as the characters are always twenty minutes behind the viewer in putting the pieces together—and not in a dramatic irony kind of way. More in a do they not trust the viewer to figure this out? kind of way. And the Parkinson’s thing? That doesn’t come back again, thematically or otherwise, in the second half of the series, beyond Joe shaking in his close-ups. He climbs down a perilous ladder with dramatic ease at one point. Off the very building where he nearly fell off earlier saving the kid in the first scene. So. Yeah. I don’t have an answer for that choice, besides that maybe the writer forgot. The writer, by the way, is Peter Berry, who wrote on things I really enjoy, like Prime Suspect. Which leaves me additionally confused about what exactly went wrong here.

The story arc that the show chose does not work with the set-up. The set-up could have worked, if there were a payoff waiting. But sadly, no. There are a few bright spots, cinematography knew how to do their jobs. And to be fair, it’s hard to tell if the acting suffers because the writing is just that bad, or if by episode three everyone came to the tragic conclusion that nothing was going to save this thing. It’s hard to know what would have worked well had they had something better to work with.

To paraphrase the final tacked-on line of the series, we will carry the scars of having watched this, and maybe, one day, heal.

The Suspect is available now on Sundance Now or AMC+.


← Jennifer Lawrence Can't Elevate the Flat Drama of 'Causeway' | See How The Other Half Lives In The 'Glass Onion' Trailer →
Header Image Source: ITV
Most Viewed