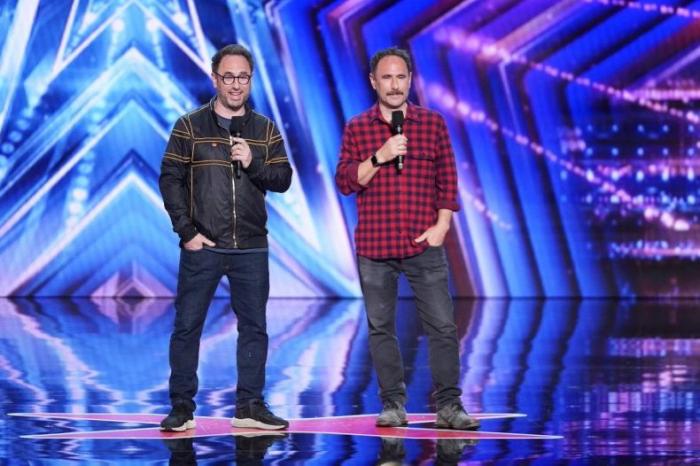 The Sklar Brothers, and an Eye-Popping Golden Buzzer on 'America's Got Talent'

Lainey apprised me last night that the Sklar Brothers were on America’s Got Talent, and while that may not mean much to many of you, to me it means that America’s Got Talent apparently also allows professional acts on their show. I personally feel like if you have an extensive Wikipedia page, you should be ineligible for a talent competition, but that is apparently not the case on America’s Got Talent, despite the fact that the Sklar Brothers already have three stand-up specials (two on Comedy Central, and one on Netflix). They’re also actors, who have appeared in movies and television both together and apart, and I personally know them best from Better Call Saul, after they landed a small role on the series a few years ago. They were also hosts on an ESPN Classic series that ran during the aughts, and they’re recognizable to kids from their appearances on Disney’s Mighty Med. They have over 60 IMDB credits, to boot.

It’s weird as hell that they’d enter a talent competition, and given their credits, you’d think they’d crush it. They did fine with a family-friend bit that was good enough to get them to the next round with four Yes votes (although, Heidi Klum was iffy). They do have great chemistry, but the material is a little 1992 Jerry Seinfeld.

In the course of finding their clip, I also ran across last night’s performance of Léa Kyle, a quick-change artist who was granted the final Golden Buzzer, which allows contestants to advance to the live show. Heidi Klum appropriately advanced Kyle. I didn’t even know that a quick-change artist was an actual thing, but this blew me away. I have no idea how she did this.


← No, Madonna, You Don't Get to Take Credit for Lil Nas X's Same Sex Kiss Performance | 'Halloween Kills' at Venice and Jamie Lee Gets a Golden Lion →