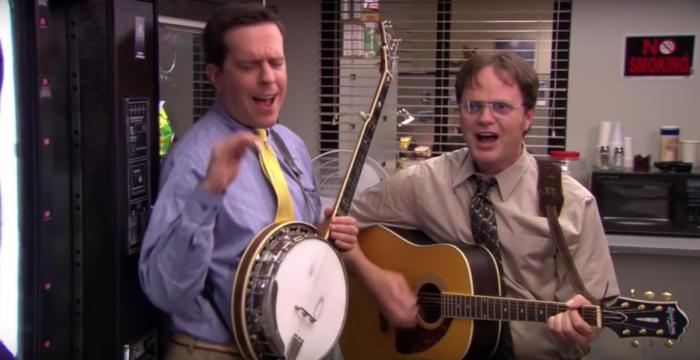 I still think that The Office should have ended with Jim and Pam’s wedding, one of the greatest sitcom moments of the aughts. Barring that, the series should have closed shop after Steve Carell left, except then we wouldn’t have been able to witness a number of great guest stars come through, like Will Ferrell, James Spader, and Catherine Tate (I had to look it up, because I had misremembered Timothy Olyphant and Idris Elba briefly in that role, but both had different positions, and both were on with Michael Scott).

In any respect, after Michael Scott left and the series ran through a number of guest stars, it eventually needed to settle on a new manager, and the decision eventually came down to either Dwight or Andy. Personally, I believe that Andy Bernard is the worst character ever introduced to the series, and I will take that to my grave. Andy Bernard — and honestly, Ed Helms — is the comedy equivalent of an emotional vampire. He’s like a sponge that sucks the humor out of everything around him. Andy was so boring that to enliven the character, the writers had to give him an anger management problem and even his anger was neither convincing nor funny.

Andy Bernard was the worst, but of course, Dwight — a consistently great character — wasn’t exactly the right choice for manager, either. As Aaron Shure, one of writers of The Office, correctly explains in Andy Greene’s new book The Office: The Untold Story of the Greatest Sitcom of the 2000s:

I also didn’t want Dwight to be empowered because I was afraid he wouldn’t be funny anymore with power. It’s funny if he sets the office on fire and blowtorches all the doorknobs. But if he did that all day long without any sort of check on his behavior, it would be terrifying.

Some of the other writers, however, felt that Dwight should have been the boss, because “it felt like he was going to do some insane, inappropriate, horrible, and cruel things, but he may now suddenly be forced into a position to contemplate what he was doing a little more, and that seemed intriguing.”

The debate among the writers waged on, up and until the network basically made the decision for them, promoting Andy to the manager. Why? Because he was the most suited to the job? Oh, no. Of course not!

Brent Forrester (Writer, Seasons 3-9): The writers and the cast, generally speaking, were really excited about Dwight becoming the boss. It just felt correct, and that was our creative thrust. Mostly it was pushback from the network saying, “Well. Is there someone more famous that we can put in here?” Of course, the creators always bristle at that and just want to do the right thing creatively. That was a big thing. But Ed Helms had this giant advantage because of course he was in The Hangover. Not to completely read the minds of the network, but that was my understanding of how that decision got made.

In other words, blame Todd Phillips.

Also, it’s been nine years, but also: Did no one even think to consider Angela as Michael’s replacement?

← Rachel Weisz Is Not Playing Scarjo's Literal Mother in 'Black Widow,' Is She? | Briefly: Stocks Are in Freefall and the President is Not Handling It Well →