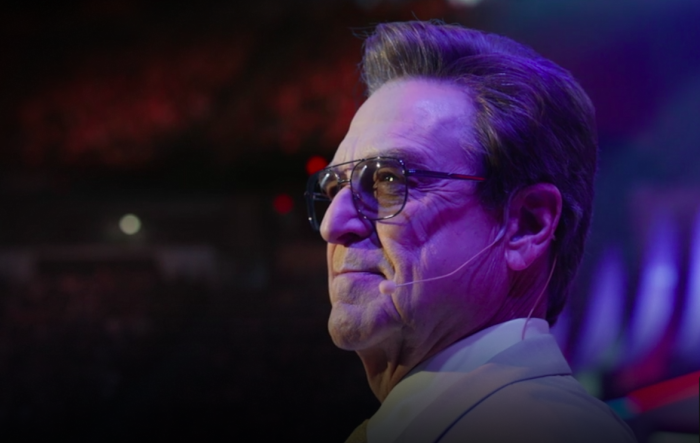 'The Righteous Gemstones' Season Two: To Err Is Human, To Forgive Is Divine

I’m hard-pressed to think of any other series in which antics such as a disastrous jump off a balcony resulting in limbs broken like breadsticks, an inadvertent slip and slide in a pool of blood (a bit that quite literally brought tears of laughter to my eyes), and a baby fished out of a port-o-potty could be so fearlessly pulled off, but The Righteous Gemstones does it with aplomb. Danny McBride, creator (along with longtime collaborators Jody Hill and David Gordon Green) and star, has managed to accomplish the difficult task of creating scenarios so unhinged, so completely absurd—there’s an extended vomit scene that is almost awe-inspiring in its commitment—that even the most juvenile moments circle back to being art.

This past Monday saw the season come to a close and, with it, another chapter in the book of Gemstone, the madcap family pulling big money from the televangelist industry. Much like season one, a large amount of the conflict takes place via interfamily tensions, but this time around, the stakes are higher. As revealed in the finale, it turns out the people responsible for Eli’s (John Goodman) attempted murder are fellow megachurch leaders Lyle and Lindy Lissons (Eric André and Jessica Lowe, respectively). While the mysterious identity of the perpetrator behind the Cycle Ninja attacks looms large, one of the main undercurrents of the season occupies itself with the theme of forgiveness. Chief among them is Eli’s struggle with reconciling his former self with the man of God he sets out to be. But with the arrival of his old friend Junior (Eric Roberts), Eli comes to the realization that the past often has a way of catching up with you. It’s only after he comes to terms with his darkest secret (the murder and secret burial of Junior’s father) that he’s able to find peace within himself. Granted, some of that inner peace is the result of him tracking down the Lissons and setting the Cycle Ninjas on them, but hey, we all have different ways of coping.

While much of Eli’s journey revolves around self-forgiveness, there’s also the matter of him and his children finding their way to the path of forgiveness for one another. For Jesse (McBride), it’s about discovering that his eagerness to lead the Gemstone empire was misplaced, owed mostly to his sense of pride and the desire to step out from behind Eli’s shadow. Last season was all about Jesse forgiving his eldest son, Gideon (Skylar Gisondo), for the hurt he caused his family (both real and perceived); this time around, it’s the dynamic between Jesse and his father that moves the season forward. Many people, myself included, likely assumed that a portion of this season would be dedicated to Jesse coping with the personal fallout from confessing the contents of that blackmail tape. Interestingly enough, however, Jesse’s struggle to fix his marriage occurs in between seasons, which means we never actually see him and Amber (Cassidy Freeman) reconcile after the events of last season. This may be an irksome choice for some viewers, but it’s a savvy decision that works to our advantage: there’s no need to watch the well-trod territory of marriage counseling and the like when we can safely assume they’ve patched things up simply by observing how much they’re enjoying one another’s company and how strong of a team the two of them have become. It also grants the space for Amber to become a far more active participant in the series, an opportunity Freeman takes full advantage of, deftly performing the balancing act of a dutiful wife who is also a genuine force to be reckoned with, not to mention getting the chance to put her own comedic chops on display.

Of course, one of the most intense conflicts among the Gemstone family happens between Eli and youngest child Kelvin (Adam DeVine). Across both seasons, Kelvin’s storyline has been my least favorite, and I would have been quite happy to have less of his “God Squad” in favor of more BJ (Tim Baltz), Judy’s now-husband, and everyone’s favorite homestyle biscuit of a man. Although there’s passing humor when it comes to the homoerotically charged nature of Kelvin collecting an assortment of musclebound worshippers, it quickly feels like a brief running gag that was stretched out long past its ‘sell by’ date. But it’s impossible to deny the emotionally fraught nature of Kelvin and Eli’s physical fight, especially upon seeing Eli succumb to his worst inclination and perform his signature move on Kelvin, breaking his youngest son’s thumbs. Being the parent, Eli is immediately regretful (to be fair, it would be incredibly hard for anyone to not commit bodily harm to DeVine’s taunting face), though Kelvin maintains a grudge until Eli is shot, forcing him to face the fact that his insecurities are the driving force behind most of his decisions. Though Kelvin tends to hold the least amount of emotional weight throughout the series, the scene when Eli wakes up as Kelvin fervently prays over him and he whispers, “I love you,” is one of the most touching moments in the series thus far.

Sometimes it takes being reminded of just how fragile life is to get your priorities in order, and for the Gemstones, it’s Eli’s near-death experience that allows them to put aside a lifetime’s worth of bickering in order to close ranks (Jesse: “I got mad love for my baby sis and baby bro”). Although the possibility of a life-ending can be cause for self-reflection, we’re reminded that birth can also do the same. Baby Billy’s (Walton Goggins) plotline doesn’t hold quite the same mildly creepy roguish humor as the previous season, but watching him come to terms with his failings as a father as Tiffany’s (Valyn Hall) due date approaches does tie in well with the many overarching father/son dynamics (even Junior and Lyle’s damaged relationships with their own fathers are briefly explored here). For Baby Billy, it takes a come-to-Jesus moment in the form of the departed Aimee-Leigh (Jennifer Nettles) talking him through the decision to see his son, Harmon (Macaulay Culkin in a surprise appearance), who he abandoned decades earlier to ask for forgiveness. Of the appeals for forgiveness in the season, it’s the one that goes the least smoothly—though that punch in the face is deserved—but it’s an honest reaction. As we see in the last scenes of the finale, both men manage to find closure, as Baby Billy is reunited with Tiffany and their baby while Harmon sits among the congregation with his own family. “I’m sorry” doesn’t fix someone’s wrongdoing, but it’s a good start for building the bridge that can take you to the opposite side of an unfortunate situation.

It’s odd to think that a comedy that trafficks so heavily in sophomoric humor can also be filled with love (Judy, as she stops Tiffany from leaving: “You’re family, and the thought of you running away on this bus right now is making my gooch pucker”). But that’s what McBride excels in: the ability to hold seemingly opposing natures in one entity at any given time; a religious satire that maintains deference to a God; characters steeped in hypocrisy, who are loveable regardless. For many, the idea of making a fortune off of religious belief is distasteful at best, McBride manages to use the trappings of organized religion to create one of the funniest and most well-rounded comedies currently on air. Covering such a large swathe of emotional ground gives the Gemstones’ childish antics a greater purpose, as well providing their ever-growing empire something that has a deeper meaning other than operating solely as a cash grab (for the record, real-life megachurches are bad, but interesting fictional settings are good). With season three assured, it’s likely we’ll see the Gemstones go back off the rails as they seek to preserve their financial and religious standing. One thing I’m sure of is that McBride and Co. will bring the same amalgamation of ridiculous humor and heart. It’s all about faith.

Both seasons of The Righteous Gemstones are available to stream on HBO Max.

Kaleena Rivera is the TV Editor for Pajiba. When she isn’t worshipping at the alter of Edi Patterson (here’s a great interview with her with what should be a familiar byline for regular readers), she can be found on Twitter here.


← It's No 'Cliff Beasts 6,' But 'The Bubble' Trailer Still Looks Promising | 'The Batman' Is a Hellish Fusion of Genres and Ideas, and It's Absolutely Fantastic →