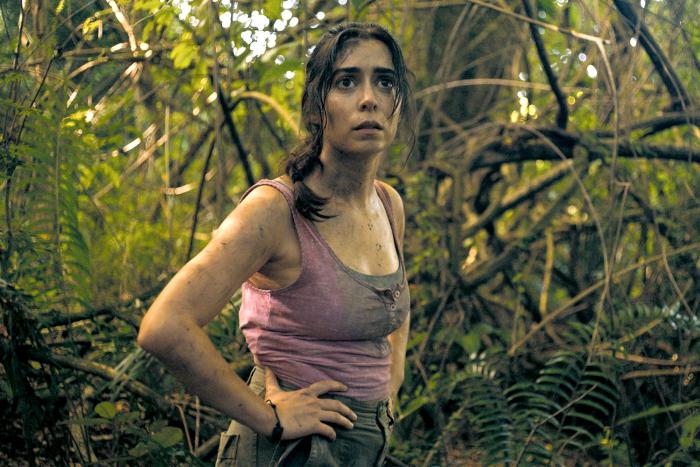 'The Resort' Is a Perfect End of Summer Show ... So Far

Midway through the first episode of Peacock’s newest Comedy-Drama (Murder Mystery/Thriller) The Resort, starring Cristin Milioti (Palm Springs, Made for Love) and William Jackson Harper (Love Life: Season 2, The Good Place), I texted some friends, “THE RESORT !!!??” My next text read, “I kind of dig it.” By the end of the night, my messages looked more like this: “There’s CHOREOGRAPHY!??” “I’m hooked,” “why is this so good?!” I had been rewatching Bust Down (another sleeper Peacock hit) while cleaning and didn’t mean to start The Resort until it autoplayed. By the time I finished doing the dishes I was hooked, canceled my plans, and strapped in to watch for the rest of the night.

The Resort, it turns out, is not The White Lotus knock-off its promotional materials make it out to be (don’t worry there is still plenty of local/resort staff drama). Rather, it’s a comedic (Barry-funny, not “funny haha”) thriller that achieves the special kind of low(ish) stakes edge-of-your seat-suspense and end-of-episode shock that network television used to do best.

I generally stay away from True Crime and fiction about fictional True Crime nowadays. Unless a podcast or series really makes a splash, I tend to prefer my comfort TV doled out by a merciless Liz Lemon than scrambling between suspects and theories. The Resort, however, gets away with falling into any well-worn mystery tropes because, despite its grim premise, the show never forgets its own silliness and embraces it without feeling the need to hit us over the head with every punchline. At first, I couldn’t put a finger on what made the show so lovely. Until that is, I saw the show was created by Andy Siara. Siara, if you are unfamiliar, also created the 2020 Groundhog Day-trope bending rom-com, Palm Springs-one of my favorite movies of the last few years and a poignant reminder of Milioti’s star power. The Resort occupies a very similar place as Palm Springs: it pays tribute to beloved tropes of its source material (network dramas/murder mysteries) while creating enough chaos, fun, and heart that the pieces can hardly be classified as just one thing.

Without spoiling any of the good stuff, The Resort centers on Emma (Cristin Milioti) and Noah (William Jackson Harper), a couple celebrating their tenth anniversary on a trip to Mexico. After getting in an accident, Emma finds an old cell phone with a photo in it that she connects to a fifteen-year-old unresolved missing persons case from a nearby resort. The case, she discovers, went cold before any substantial investigation because the day after the two tourists disappeared there was a devastating hurricane that destroyed the hotel where they stayed. In a pseudo-Yellowjackets style flashback, we then meet the presumed missing tourists, twenty-two-year-old Sam (Skyler Gisondo, Licorice Pizza), the original owner of the cell phone, and similarly aged Violet (Nina Bloomgarden), at a different Cancun resort in 2007. In the present, Emma and Noah try to figure out what happened by piecing together mysterious texts and photos from the night of the disappearance.

As can be expected of the genre, there are plenty of clues that click into place as you watch, friends turn foes (and vice versa), and someone or something always seems to be lurking about, watching our citizen detectives. It is network television at its finest and a compelling case for canceling at least one cop/emergency services procedural (I suggest 9-1-1: Lonestar).

The Resort has local lore, a powerful family of fine tailors, found-family, a mysterious partially mad wannabe hotelier, even more mysterious books and maps, and at least one not-safe-for-NBC dick pic. Do yourself a favor, skip They/Them, and move right along to what I have unofficially dubbed the perfect end-of-summer show. The first four episodes (out of eight) are available on Peacock and Episode 5 begins streaming at midnight on August 11.