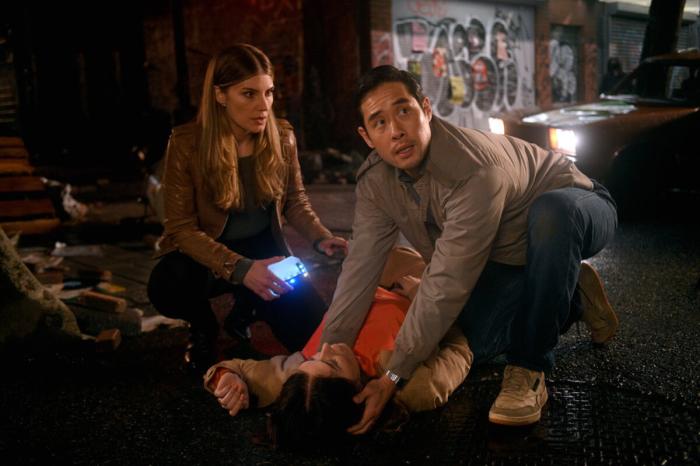 The Quantum Leap reboot premiered this week on NBC, and I want to be careful here about judging the series alone on its pilot. That said, the pilot is aggressively mediocre and lacks any of the fun associated with the original series featuring Scott Bakula and Dean Stockwell. Given how much exposition is necessary for its premiere, I’m willing to withhold judgment until the series finds its legs.

It is a problem, however, with the opener. It spends so much time explaining the premise of the reboot that there’s not enough time left to fully devote itself to the “case of the week,” here a generic heist that our newest leaper, Ben (Raymond Lee), must interrupt before he can leap to his next mission.

The pilot episode opens at a party where Dr. Ben Song is confessing his love to his fiancée, Addison Augustine (Caitlin Bassett). Soon thereafter, Ben — a physicist — inexplicably jumps into the quantum accelerator and leaps back into the body of a getaway driver in the midst of a bank robbery in 1985. Ben, like Sam Beckett, has no memory of who he is, but his fiancée — as a hologram similar to Al in the original — is there to help Ben navigate the mission. Ben doesn’t recognize Addison as his fiancée, nor does he know why he abruptly jumped into the accelerator (Addison was supposed to be the leaper), although back in the control room, Ian Wright speculates that Ben had figured out the algorithm necessary to retrieve Sam Beckett. If he did, Ben doesn’t remember it.

That brings me to the biggest problem with the reboot: The control room. I appreciate the diversity of the cast that it brings — Nanrisa Lee and Ernie Hudson join Mason Alexander Park, who is non-binary — but it’s too busy. Those three cast members — in addition to Addison — spend nearly as much time trying to figure out what’s going on, and how to aid Ben in 1985 as the episode itself spends in 1985. I appreciate the desire to make it more serialized — Al’s daughter appears to be involved — but in the original, Al and Ziggy accomplished most of this within the time period. Instead of Al telling Sam what he needs to know, here it’s relayed from the control room to Addison to Ben. It seems like an unnecessary step in order to include additional cast members.

The other problem is that none of the chemistry between Al and Sam exists here between Ben and Addison, and I’m not sure yet if it works to insert romance into the relationship between Ben and his hologram. In theory, it’s a nice twist. In practice, it’s one more thing that distracts from the series’ main event, which is the time-traveling missions.

That’s the big hiccup here: The original Quantum Leap sparingly doled out details about Sam (and Al’s) life over the course of five seasons. Here, they want to set up a mystery, a love story, and a potential conspiracy involving Al’s daughter in addition to what viewers want to see, which is Ben leaping into the bodies of other people from the past. That should be the focus of the series. The Quantum Accelerator should be a plot device, not a central plot point.

That may be the series’ ultimate destination (and perhaps the reason a new showrunner is brought in early on in the season), and I’m willing to wait and see if the series can settle into the leaps themselves instead of the mystery behind the leaps. Thirty years later, I continue to remain frustrated with the murkiness of the original’s finale, but now that Quantum Leap is back, I’m in no hurry to unwind its mysteries. I just want to see Ben leap into the bodies of other interesting people from his past, preferably those with a much more interesting story than a getaway driver trying to pull off a big score to pay for his wife’s medical bills.


← 'Heathers: The Musical' on Roku Is Fine. That's The Problem | Hulu's 'Hellraiser' Trailer Has Such Sights To Show You →