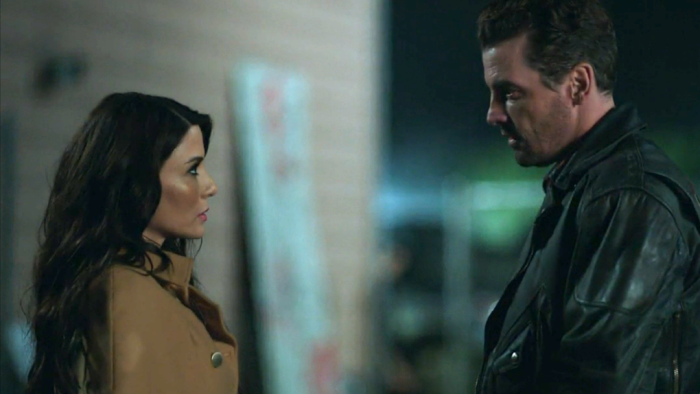 While Riverdale is largely dependent on the drama of its younger characters, the parents have been known to have their own sordid and melodramatic affairs. What would Riverdale be without Hermione’s tumultuous relationship with daughter Veronica or Jughead’s Southside Serpent-leading dad F.P. Jones? Well, I guess we’re about to find out because both Skeet Ulrich and Marisol Nichols are leaving and won’t be returning to the popular CW series in Season 5. Welp.

Ulrich’s exit from Riverdale was announced first, with Nichols’ departure confirmed shortly after. It was incredibly shocking considering the two have been a staple of the series since the very beginning. Ulrich was even upped to series regular in Season 2. But alas, all good things must come to an end and it seems Ulrich and Nichols are moving on to explore other opportunities.

However, it remains unclear how Riverdale will handle both of their exits. Are they leaving town? Will the show simply pretend that they’re still around while keeping them offscreen? Considering that Betty, Jughead, Veronica, and Archie are all graduating high school at the end of the season (my, how they’ve grown!), it’s possible that Ulrich and Nichols’ departures are due, at least in part, to that development.

In a statement to TVLine, Riverdale showrunner Roberto Aguirre-Sacasa had this to say about both cast members’ exit after Season 4:

“Part of life in Riverdale — and part of growing up — is saying goodbye to people. I’m grateful to Skeet and Marisol for their incredible work on the show these last four years, and we all wish them well on their future endeavors. F.P. and Hermione will never be far from our hearts. And, of course, they’re always welcome back in Riverdale.”

Most recently, Hermione (whom I loved and was never given enough screen time) made amends with her constantly scheming husband, Hiram Lodge (Mark Consuelos), who currently has a life-threatening disease. Meanwhile, F.P. is still Jughead’s sole provider and with Ulrich leaving the series, it probably means that he’ll have to go it alone for a while — unless, of course, Jughead’s mom shows back up on a full-time basis.

Fare thee well, Skeet Ulrich and Marisol Nichols. Riverdale won’t be the same without you.


← Dentist! Chris Evans to Join 'Little Shop of Horrors' Remake Like the Internet Wanted | Reddit Asks Why People Enjoy Being Alive And Gets A Bunch Of Gross, Heartwarming Answers →