'The Morning Show' Jumps the Shark, Kills Off a Major Character

Before we get to this week’s episode, let’s me catch you up real quick on the second season of The Morning Show — a sort of behind-the-scenes look at a morning show like Today. For those who have never watched, let me add that the first season — which started off rocky — came into its own and was quite successful until the very end when Gugu Mbatha-Raw’s Hannah was killed off. Hannah was a booker on The Morning Show, and she had been raped by Mitch Kessler (Steve Carell), the Matt Lauer of the series. After Kessler was fired for a history of sexual assault, the network tried to silence Hannah through promotion, but the experience was so triggering and traumatic, she overdosed and died the night before her meeting with the network. Her death prompted Alex Levy (Jennifer Aniston) and Bradley Jackson (Reese Witherspoon) to hijack their morning show and speak candidly about the toxic culture behind the scenes. It cost some people their jobs.

When the second season opens, Alex has left The Morning Show after suffering from an emotional meltdown. Bradley is co-hosting with Hasan Minhaj’s Eric Nomani, but when Nomani is promoted to the anchor position on the network’s nightly newscast, they manage to convince Alex Levy to come back. She makes it about a week before another meltdown (hours before she was set to moderate a Democratic Presidential debate) after she received word of a tell-all book coming out that would reveal she had an affair with Mitch Kessler. Bradley, meanwhile, is trying to gain some respect on The Morning Show as ratings dip. She also finds herself in a relationship with Laura Peterson (Julianna Margulies), and there’s a lot of story about her coming to terms with the fact that she’s attracted to women and reconciling that with her more conservative, Southern upbringing. There’s also a weird storyline where the weatherman (Nestor Carbonell) is accused of cultural appropriation for using the term “spirit animal,” but after he beats up someone who was harassing his Asian boss, he claims he can’t be racist. It’s an ill-considered storyline.

It’s honestly not been a great season, and for a show starring two heavyweights like Reese Witherspoon and Jennifer Aniston, they share surprisingly little screen time together. Julianna Margulies has been a welcome addition, but after zeroing in on MeToo and complicity in its first season, the second season has struggled to find an identity or a throughline. It’s also morphed from a “prestige drama” into a campy soap opera, and while it’s still watchable (it’s hard not to be with that cast, which also includes Karen Pittman, Billy Crudup, and Mark Duplass), it’s not going to win any writing awards anytime soon.

The biggest issue this season has also been Carell’s Mitch Kessler. I’m not sure what the show is trying to accomplish, but it continues to follow him after he was fired for multiple sexual assault complaints and at least one rape. Kessler relocates to Italy to avoid the press and live out his life in anonymity. In Italy, he meets a woman and they hit it off and end up in lockdown together (the timeline of The Morning Show is set around the beginning of the pandemic). The show seems to take pains to create sympathy for Kessler both through his relationship with his new girlfriend and through Alex Levy. 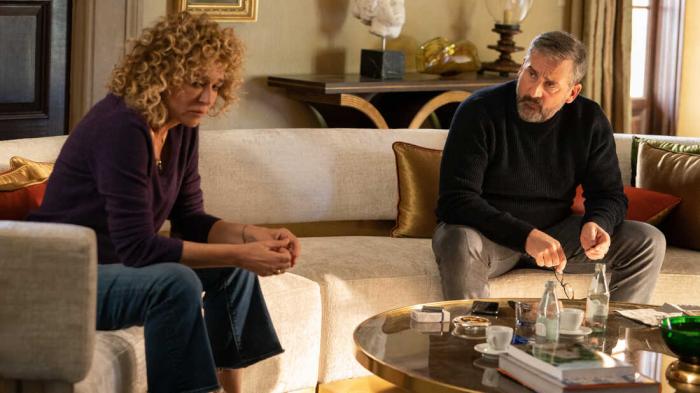 Aniston’s Alex, upon learning that the tell-all book will reveal her affair with Kessler, blows off all of her obligations and flies to Italy to find Mitch and ask him to deny the affair publicly, even though the affair is true. Alex doesn’t want to be poisoned by her relationship with Mitch. While in Mitch’s palatial Italian villa, the two fight, and they make up, they fight again, and make up, and Alex confides that he’s her best friend, that she misses him, and that he was her work soul mate.

Just as Alex and Mitch are getting along, a new revelation comes out that Mitch specifically targeted Black women in his assaults. Alex gets angry again, reiterates that she wants the statement from Mitch denying their affair, and Mitch acquiesces, mostly because he sees no reason to ruin her life, too. Alex departs on chilly but amicable terms with Mitch, and after she leaves, Mitch goes back to his girlfriend’s house. They have sex, but afterward, Mitch decides to go get his girlfriend a pack of cigarettes.

At this point, there’s a nearly five-minute sequence that alternates back and forth between Mitch — driving to get cigarettes — and Alex, driving to the airport to get back home. Neither character speaks during this sequence, although it’s clear Alex is trying to stay awake and figure out what she’s going to do when she gets back to the States. Mitch, meanwhile, starts to relive all of his bad moments, fights with Alex, the divorce his wife asked for, his firing, etc. As he’s doing this, a car comes around the corner and its headlights blind Mitch and he drives off a cliff, plunging to his death. His final thought is of that big, heartfelt embrace he received from Alex before she left his house.

That is how the episode ends. That is how Mitch Kessler dies. That is how they write poor Steve Carell out of this terrible storyline that worked in the context of the first season, but seemed to exist only so they could continue to put Carell’s name on the poster in the second season. I’ve seen next week’s episode, but all I will say is that, even in death, Mitch Kessler’s heinous behavior continues to reverberate.

I guess we’re supposed to feel a little sad for the poor, wealthy man who lost his job because of a pattern of rape, sexual misconduct, and abuse of power that went back years? Because, y’all: Rapists are people, too! And he was trying to be a better man (by convincing others to teach him how)! And he didn’t even realize he was targeting Black women, so how could that be racist?

← Twitter Reacts to CNN Setting Up a Studio | No, Michael C. Hall Didn't Like That 'Dexter' Finale, Either →