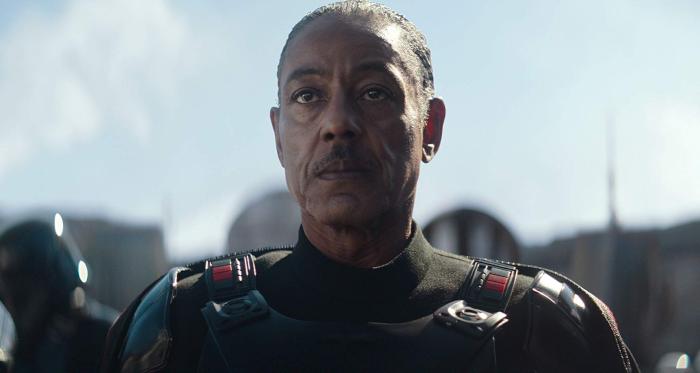 IT'S A TRAP On 'The Mandolorian', And A Crazy Theory About Why Giancarlo Esposito Wants Baby Yoda...

This week’s chapter of The Mandalorian dropped early because APPARENTLY LucasFilm has something else going on this Friday, which is odd because what could possibly be more important than the penultimate episode of Podjiba’s Official Favorite Show of 2019 [Publisher’s Note: 👀), starring Hollywood’s New Hope himself?

THR Cover: #BabyYoda represents the past, present and future of Hollywood https://t.co/iJNWIkboa1 pic.twitter.com/WbaJSv7oEp

The point is, we got to watch the episode early — and what an episode it was! Things, uh, actually happened as familiar faces returned, backs were stabbed, traps were laid and the death toll climbed. In a nutshell: Mando finally listens to the holographic voicemail from Greef Karga (Carl Weathers) that we saw the Richard Ayoade-bot futzing with last week. The message is essentially an invitation to return to Nevarro and help the Bounty Hunters Guild kill Werner Herzog, who has apparently set himself up as a little despot in the days since Mando swindled him. So on the face of it, this seems like a great plan for all involved: The Guild gets their city back, free from Imperial interference, and Mando finally gets the bounty off of his and Baby Yoda’s heads so they can stop running. YAY!

Only of course it’s too good to be true — and Mando kinda knows it, which is why he rounds up his own posse before flying back to Nevarro. He’s picks up Cara Dune (Gina Carano) to guard his back, and he convinces Kuiil (Nick Nolte) to join them as Baby Yoda’s on-board babysitter (because without supervision, Baby Yoda will push ALL THE BUTTONS and pull ALL THE KNOBS, duh). Our band of bandits isn’t all cozy, however, as Cara and Kuiil immediately butt heads over their past allegiances (Kuiil was a slave of the Empire, while Cara was a rebel shock trooper). Worse yet is Mando’s reaction to Kuiil’s latest project: the rebuilt (and reformed?) IG-11, a.k.a. Taika Waititi-bot, which Kuill reprogrammed after Mando shot it. Now it serves tea, but Mando is worried it may still be out for Baby Yoda’s blood and doesn’t trust it.

Speaking of distrust: Mando and his team make their way to the outskirts of Nevarro, to meet up with Greef and his band of bounty hunters. They all brought back up because what even is honor amongst thieves, anyway? The plan seems straight-forward, as Greef explains it: Use Baby Yoda as bait to get close to the Client, then have Mando shoot him. Only a funny thing happens while the party camps out overnight, and that’s a stray… I’m gonna say wyvern attack? I dunno, smallish space dragons come flapping down, looking for snacks, and one leaves a pretty nasty gash on Greef’s arm. Luckily Baby Yoda uses the Force to heal it, and so when it’s time for the INEVITABLE BETRAYAL to happen, Greef can’t go through with it. Instead of killing Mando’s crew and making off with the baby, he shoots his own back up and saves Mando instead. Now that they’re actually on the same side again, it’s time for a new plan — one that doesn’t involve sacrificing Baby Yoda at all.

And what they come up with is… well, pretty dumb, actually, but desperate times call for desperate boneheaded gambles so I get it. Mando sends Kuiil back to the ship with Baby Yoda, while Greef pretends he’s captured Mando. Together with Cara they bluff their way to Werner Herzog, hoping that saying “the baby is napping!” will be enough to keep any Imperial soldiers from looking into the closed pod until they get a chance to kill their target. And that’s about when Giancarlo Esposito’s Moff Gideon character finally shows up to ruin EVERYBODY’S day and lead us to our cliffhanger. He is apparently Herzog’s boss, and he already knows the baby isn’t in the pod — so he opens fire on the cantina, killing Herzog and his whole crew, then sends troopers to chase down Kuiil and Baby Yoda in the desert.

In the end Mando, Cara and Greef are trapped and outnumbered, Kuiil has been shot down, and the baby is in the arms of a Stormtrooper and returning to Moff Gideon, who claims the child “means more to me than you will ever know.” Now, earlier we thought the remnants of the Empire were only interested in Baby Yoda because of his midichlorians, but after seeing the ways the child uses the Force in this episode, I’m starting to wonder if there’s more to the story than that. I mentioned the healing thing, but what I didn’t mention was the time Baby Yoda VERY ADORABLY tried to Force-Strangle Cara because he didn’t understand what arm wrestling was. Yup, we’ve got a cute little almost-murderer on our hands, and while it’s easy to play that moment off as the baby being overprotective of Mando, there’s something else that’s impossible to deny: FORCE-STRANGLES ARE DARTH VADER’S SCHTICK. What if Baby Yoda has been on the Dark Side all along, and Gideon is so intent on capturing him alive in order to worship him, or follow him, or whatever you do when you have a new Darth in your midst? WHAT IF BABY YODA IS EVIL?

(I mean, the clear answer here is: All hail our new Dark Lord Baby, take me to the Dark Side with you, child.)

Now I’ll admit, maybe I’m reading too much into this Breaking Bad Baby theory, but I think there’s another mystery I’m not wrong about: Kuiil’s death. The obvious explanation should be that the stormtroopers chasing the Ugnaught were the ones that shot him, in order to capture the baby — but if that’s the case, then why wasn’t the scene shot to show that? Instead, the way the sequence is edited leads you to believe that Kuiil might actually be home safe. He’s got Mando’s ship in sight, the hatch is lowering, he’s almost on board and the troopers are still far in the distance… and the next thing you know, Baby Yoda is on the ground and Kuiil is dead. What I think happened is that Mando’s beef against the Taika-bot was entirely justified, and in fact it killed Kuiil. It would explain why the scene deliberately obfuscated the murder, why Mando was so vocally opposed to the droid and insisted on it staying behind, and it would also explain how Moff Gideon knew Herzog didn’t really have the baby in the first place. IG-11 was his inside droid from the start!

Will our heroes survive this dire stand-off? Will Mando get his Baby back? Will Moff Gideon show up in The Rise of Skywalker… OR WILL TEENAGE YODA? We’ll have all the answers soon enough!