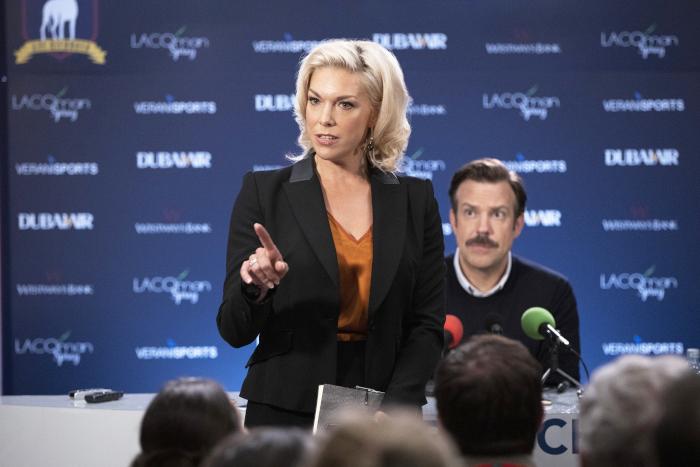 Full disclosure: I just finished Ted Lasso this past Sunday and like most viewers who fell under its lovely spell, not having any more new episodes to look forward to has left a soccer ball-sized (which will henceforth in this article be appropriately referred to as “football”) hole in my heart. The last few days have, however, afforded me the opportunity to process all of the magic that takes place: the sweet depiction of thoughtful leadership, the refreshing emotional intelligence, and the value of human connection. However, there is one major element that I’ve become absolutely obsessed with, and that element would be one Rebecca Welton, played by English actress Hannah Waddingham.

Waddingham has been a well-known name in London’s West End for over a decade now, but if you don’t keep up with the theatre scene then there’s a good chance you know her as Septa Unella, better known as the “Shame!” woman, from Game of Thrones. With the success of Ted Lasso, however, her name recognition has gone up tremendously here in the States. As the formidable and beautifully complex Rebecca, Waddingham brings something truly special and glorious to what could have easily become a third-tier character marked primarily by bitter cynicism. And yet, when it came time to execute, Waddingham chose to embrace an aching vulnerability held together by little more than dignity and pride. Between the writing and her brilliant performance, Waddingham sees to it that Rebecca Welton has the greatest character arc on a show filled with individuals who undergo compelling personal evolutions.

Like most of the cast, Rebecca’s plotline hinges on her relationship dynamics with the other characters. The show kicks off with the promise of her being the big bad villain when Rebecca reveals to her favorite punching bag, assistant Leslie Higgins (Jeremy Swift), that her ultimate goal is to bring down AC Richmond, the Premier League football club she obtained in a divorce settlement, as a means of hurting her now ex-husband, Rupert Mannion (Anthony Head, who is honestly so despicable in this role that it leaves me breathless). She sees Ted Lasso (Jason Sudeikis), a U.S. American football coach with zero knowledge of the game he’s now been hired to manage, as the most wickedly efficient means of doing so because, in her words:

“I want to torture Rupert. I want him to feel like he’s being fucked in the ass with a splintered cricket bat, just…in and out, over and over in a constant loop. Like a GIF.”

Be still, my heart.

But even in this early stage, there’s little sign that we’re getting a capital ‘V’ villain. Even when she’s at the glorious commencement of her twisted scheme, her thorny aloofness wavers at times, such as when the subject of her ex-husband comes up and the ever-so affable Ted asks her, “How you holding up?” The question takes her off guard and it’s a few moments before her face dials in to a suitably neutral position (this process takes all of two seconds because that’s just how good Waddingham is) before she gives him an understated “Yeah, hasn’t been the easiest year,” before quickly moving on to another topic of conversation.

This is how the show allows this wonderful arc to unfold: for as much as Rebecca positions herself to be Ted’s foil, he, in turn, becomes hers. More than just simply (and unknowingly) side-stepping all of her evil machinations, he engages her despite herself. Even when she is still firmly of the belief that Ted is the biggest wanker that has ever wankered, she finds herself unable to resist interacting with him, such as one of my absolute favorite exchanges, initiated by the effervescent model/entertainer Keeley Jones (Juno Temple):

Keeley: “Who would you rather be, a lion or a panda?”
Rebecca, walking away: “I don’t have time for this.”
Keeley: “Okaaay. Ted?”
Ted: “Gotta go panda.”
Rebecca, coming to a halt: “Are you mad?! Pandas are fat and lazy and have piss-stained fur. Lions are powerful and majestic and rule the jungle.”
Ted: “Try telling that to an elephant. Ooh, can I be an elephant?”
Keeley: “Mm-mm, lion or panda.”
Ted: “Panda.”
Rebecca: “Lion! What’s black and white and red all over?”
Ted: “I don’t know, what?”
Rebecca: “A panda that gets anywhere near a fucking lion. The answer is lion.”

A more perfect human there never was.

Although Ted’s cuddliness slowly wins her over, it’s Keeley who has the most direct, and unanticipated, impact on Rebecca’s arc. They could not be a less likely duo, yet it is Keeley who’s integral to Rebecca’s emotional evolution. Upon meeting, Keeley is almost immediately taken with Rebecca. It’s not sexual—though if given half the chance, Keeley would jump on that in a heartbeat, no question—so much as it’s based on wide-eyed admiration of a powerful, independent figure. In a show filled with bright spots, the one that induced the most happy siren screeches from me was its emphasis on female friendships. The relationship that flourishes between the two of them is one of the most beautiful aspects of the show. Juno Temple is, of course, a major component in the chemistry that happens within their growing bond. But what makes my lower lip quiver is seeing how much Rebecca tries to resist any form of attachment to her, only to have their friendship and Keeley’s opinion of her be held in such high esteem that Rebecca’s compelled to confess her entire scheme to Ted after Keeley discovers that she has been sabotaging Ted and, by extension, AC Richmond.

Like many people, Rebecca is at her worst when she’s feeling pain. And nobody hurts her like Rupert, her flagrantly unfaithful ex-husband. I have loved Anthony Head for many years, but my God, is he punch-worthy here. Her willingness to supersede her conscience and growing fondness for Ted with her desire for revenge is a direct response to Rupert’s ability to wound her. His cruel antics escalate over the course of the season, but it’s in the penultimate episode when he delivers his most gut-wrenching blow, by showing up in Rebecca’s office to announce that he and his obnoxiously young fiancée are expecting a child. It is a brutal scene. Just when it seems as though he’s reached the lowest anyone can go, he delivers the ultimate slap in the face when he oily explains, “People change. I do want a child. I just suppose I didn’t want one with—before.”

Rebecca looks like she has been quietly murdered. What Hannah Waddingham does with her face in this scene is award-worthy. I haven’t been this bereft over an English woman trying to choke down her emotions since Emma Thompson was gifted that fucking Joni Mitchell CD in Love Actually. The incident that breaks a heart and causes it to crash land (whether from failed romance or something else entirely) often makes for a watershed moment in one’s life. The miracle of this particular moment here is that it spurs her onward to do the right thing. Funny enough, it’s not inspired by good intentions as much as it’s simply the ideal moment to confess as there’s nothing else that can possibly make her feel any worse. Whatever reaction Ted can have would surely feel like a mere pinprick compared to the atom bomb that just happened. Of course, what she’s not prepared for is Ted’s unfailing goodness. Her disbelief at his willingness to forgive her is outweighed only by her relief. When she finally throws her arms around him, we know that she’s on her way toward being on the other side of an extremely difficult ordeal.

I’m hard put to think of many other middle-aged female characters who are afforded this kind of material. She’s sexy and domineering, but also allowed moments of cuteness and deeply endearing awkwardness. And despite Rebecca obtaining her ownership status from her divorce, she’s clearly born to run shit. Her lovability stems from us being able to see her at her genuine highs—the “Let It Go” moment literally had me flailing—as well as her deepest lows. What makes her character resolution so satisfying to me is that unlike Ted, who’s in his own captivating arc, she has to overcome her own deeply tempting moral failing in exchange for connecting with others. I’m sure there will be more obstacles and lessons to be had in future seasons, but for now, I’m satisfied with this beautiful season of television, as well as one of the best villain-turned-ally plots I’ve ever had the pleasure of seeing.

Ted Lasso is available for streaming on Apple TV+.

Kaleena Rivera writes about television and film. When she’s not Googling Hannah Waddingham’s arm workout routine, she can be found on Twitter.