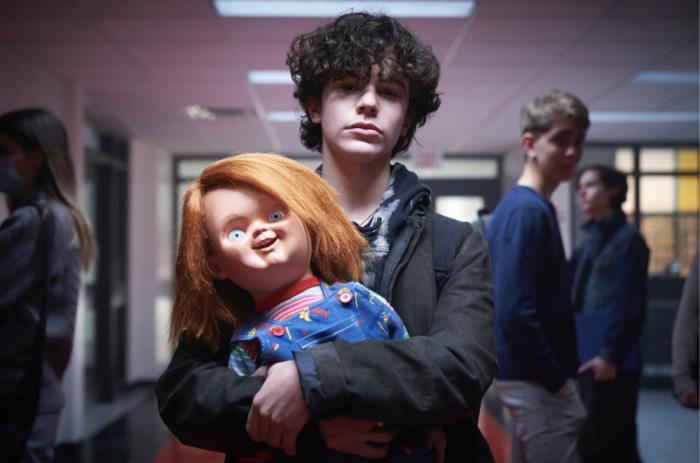 The Legacy Of ‘Child’s Play’ Continues In New ‘Chucky’ Trailer

As a young, horror-obsessed boy (who was TOTALLY normal), the Child’s Play films were a staple of any sleepover. A serial killer with his soul trapped in the body of a Cabbage Patch Doll crossed with a Teddy Ruxpin? That’s how you get kids interested in horror. Sure, I loved Michael Myers. I was frightened by Freddy. Jason Voorhees gave me a healthy fear of lakes and premarital sex. All before the age of ten! But Child’s Play is the only horror franchise that I’ve watched grow as I did.

The first time I noticed a real change was in Bride of Chucky. The three previous films certainly had a tongue-in-cheek humor to them, but Bride is the first time where it felt like the films were allowed to let loose. It was almost like we were going through puberty at the same time. The movie was campier, and sexier. It also opens with the use of Rob Zombie’s Living Dead Girl with such authority that I can’t think of late ’90s horror without thinking of that song.

After Bride of Chucky came Seed of Chucky, where the franchise truly becomes unhinged. Good unhinged. Not only was it packed with even more camp and humor, it embraced those elements with open arms. I’ll admit that, at the time, my “mid-teens” brain did not comprehend just how special that movie was. I was filled with a sort of snobbery about horror that, coincidentally enough, significantly reduced my horror enjoyment. Everything had to be “elevated”. I was obnoxious as hell.

Obnoxious and, seemingly, justified (so even more obnoxious). After Seed opened to less than stellar success, it would be almost ten years before another film in the Child’s Play franchise would emerge. In 2014, we, and by we I mean the whole human race, were gifted with Curse of Chucky. It was a new entry in the franchise that returned to its original roots, or so we thought! As it progressed, it became clear that this was still the Chucky (voiced expertly by Brad Dourif) that we had come to love. It was followed up by Cult of Chucky, which kept the movies alive and well and thriving.

There was then, for reasons I cannot fathom, an attempted reboot. A reboot without the person who started this franchise, has kept it alive and continues to bring new life into it. A person whom we have to thank for over thirty years of murderous doll insanity: Don Mancini. Mancini created Child’s Play and, aside from the reboot, has been involved with every film, every iteration. He is a horror movie unicorn. I cannot think of a single other horror franchise that has lasted this long, produced this many films, and still been under the watchful guidance of its creator. Any credit for the franchise being what it is should be given to Mancini without hesitation.

The Child’s Play movies have a vision. Mancini’s vision. There’s no need for a do-over or a course correction. The ship is sailing just fine! The films are unique, bloody, fun, salacious. Where other franchises may grow stale or repetitive, Don Mancini has had the wherewithal to let Child’s Play grow and change when needed, without losing what makes them special. The series of films are a friggin unicorn in a world of reboots, revivals, and rehashes. Now, we get to see them take their next step: to the small screen!

Arguably, Chucky already made the jump to the small screen as the last two films were released on DVD and Netflix (though Curse did get a small theatrical release). But you can shove your semantics in a sack! I’m talking TV! Actual television! A new television series, called Chucky, helmed by Mancini and continuing the story of the films is coming to SYFY and the USA Network (characters welcome) this October. Now, we have a trailer to whet our appetites. Lemme just say right now, y’all, consider me wet!

I can assuredly say that I would have been on board for whatever this show ended up being. I’m a fan. But boy, oh, boy does it look even better than I expected! Allow me to sound like Stefon when I say that it has everything: killer dolls, dismembered frogs, talent shows, angsty teens, and Brad Dourif! The legacy of Child’s Play is alive and well, and I can’t wait to see where it goes next!

“In the new television series, an idyllic American town is thrown into chaos after a vintage ‘Good Guy’ doll turns up at a suburban yard sale. Soon, everyone must grapple with a series of horrifying murders that begin to expose the town’s deep hypocrisies and hidden secrets. Meanwhile, friends and foes from Chucky’s past creep back into his world and threaten to expose the truth behind his mysterious origins as a seemingly ordinary child who somehow became this notorious monster.

CHUCKY is produced by UCP and executive produced by creator Don Mancini, David Kirschner, Nick Antosca and Alex Hedlund. Harley Peyton will also serve as executive producer. Mancini, who penned the film franchise, wrote the television adaptation, will direct the first episode and serves as showrunner.”


← Watch the Trailer for the 'Dexter' Revival, The Show You'll Watch Even Though You Swore It Off | Tim Rozon's Chin Isn't Strong Enough to Carry Syfy's 'Surreal Estate' →