'The Haunting of Bly Manor' Review: A Vivid Exploration of Memory and Sadness

The Haunting of Bly Manor, the follow-up to 2018’s The Haunting of Hill House, isn’t a ghost story. Not really. There are ghosts involved and a few scattered jump scares, but the series is less about the haunting and more a vivid exploration of loss, regret, and the solace and discomfort that memories can bring.

The series, created by Mike Flanagan and based on Henry James’ The Turn of the Screw, takes its haunting very seriously. However, it’s a haunting of the heart and mind that better encapsulates The Haunting of Bly Manor, eclipsed by an aching sadness that settles in deep and grips you. The characters are fully realized right out of the gate, which aids in their development and brings their storylines to life in deeply enriching ways.

The Haunting of Bly Manor falters in the back half, settling into a less steady cadence than that of the fantastic first five episodes. It loses some of its steam after the origins of Bly Manor’s lady of the lake are revealed. And yet, it’s the deeply moving characters and the affecting unease of the story that will keep you watching.

It all begins with Dani Clayton (The Haunting of Hill House and You alum Victoria Pedretti), a former teacher hired as an au pair to care for two orphans, Flora (Amelie Bea Smith) and Miles (Benjamin Evans Ainsworth). Dani is received with warmth and kindness by Bly’s staff — Owen (Rahul Kohli), a cook caring for his ailing mother, Mrs. Hannah Grose (T’Nia Miller), the sincere and faithful housekeeper, and Jamie (Amelia Eve), the passionate gardener.

The story is set in 1987, a year after the death of Rebecca Jessel (Tahirah Sharif), the children’s previous au pair, whose passing is more mysterious than previously believed. The reason behind Rebecca’s death slowly begins to unravel following the introduction of Peter Quint (Oliver Jackson-Cohen), the scheming and violent chauffeur who is caught between being a full-on antagonist and sympathetic antihero.

It’s a bit odd at first, and I wondered why Dani was taking an au pair position out of the blue. What was she running from? However, the reason for Dani’s excursion to England is tied to her own guilt. Whenever she looks in a mirror, she is haunted by a shadow with bright lights for eyes. The mystery man’s appearances are unsettling because he just stands there, as though judging Dani for the secrets she hides.

The mystery of The Haunting of Bly Manor unfolds like faded fragments of a memory coming into sharp focus. All the pieces are there, but Flanagan (who only wrote one episode instead of the four he did for its predecessor) and his team of writers take their time to carefully plot the story. Each episode lays the groundwork for the big reveals later on, all while the focus remains on the main characters, peeling away their layers at every turn. The Haunting of Bly Manor is unexpected, to say the least. It implements a lot of the elements typical of the horror genre, but it’s less interested in engaging with them as the driving force in storytelling.

The series explores the depth and perceptions of memory. How the echoes of the past shape and inform our identities, the way we rely on them to recall moments of comfort or pain despite how unreliable they can be. More importantly, The Haunting of Bly Manor is obsessed with the fading of memory and how it can erode who we are over time.

That is showcased in Owen’s speech about his mother’s dementia and how it began to define her. Others also began to forget what made her so unique. However, it is felt most sharply when Hannah realizes that, no matter how good a memory can be, you can’t hold onto it forever or risk losing yourself in the process. Faced with the reality of her life, Hannah could have crumbled, but she was resolute. It’s her storyline, beautiful, poignant, and heartbreaking, that I find myself thinking of the most.

The best episode of the season is “The Altar of the Dead,” which is a masterfully executed memory loop. Hannah is front and center as she attempts to understand what is going on and what it is that she’s supposed to acknowledge. It is a perfect episode that captivates and gets to the core of the show’s despondent themes. Miller gives an emotional performance that is nuanced and laced with sincerity. Of course, the show wouldn’t be grounded without Pedretti’s fantastic portrayal of Dani. Her smile is quick to appear when she’s around the children, but her eyes are full of sadness and remorse, guilt and understanding. Pedretti’s performance is understated and unnervingly powerful.

What prevents The Haunting of Bly Manor from completely soaring is in its inability to focus in the back half of the season. Time is wasted on Henry, the children’s drunk and absent uncle. He is haunted by his alter ego and his own guilt, but his arc doesn’t add much to the overall storyline because he’s so separated from the rest. Meanwhile, the season couldn’t decide what to do with Peter, who transitioned from being an antagonist to someone who was seen as sympathetic when it wasn’t necessarily warranted. The pacing also slows down and what was a story told in nine episodes could’ve easily been told in seven.

In the grand scheme of things, these are minor nitpicks. The Haunting of Bly Manor ultimately finds its strength by foregoing on typical scares to tell an intimate, captivating, and regret-filled story. The show is unrelenting in its sadness, yet open and honest enough to capture the pain of loss and identity, delving into the ways in which memories can be far more haunting than ghosts.

Review: Robert De Niro and a Vaguely Evil Child Battle in 'The War with Grandpa' 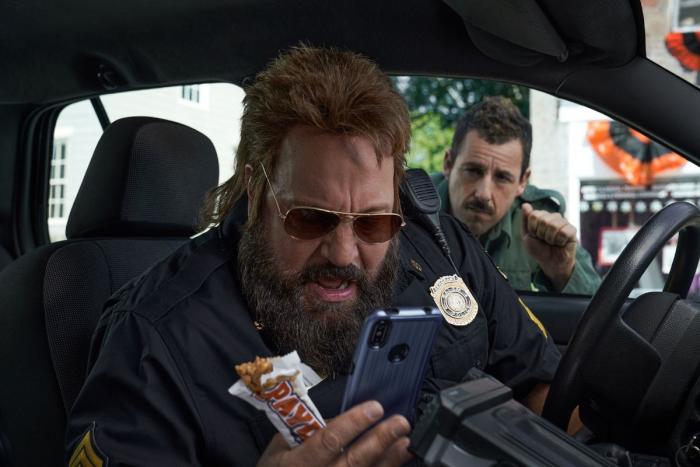 'Hubie Halloween' Review: I Am Not Here To Redeem Adam Sandler's Sh*tty Movies