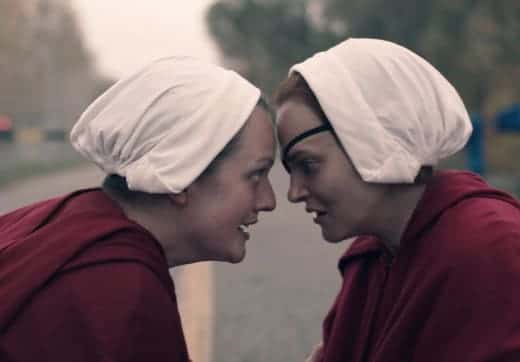 ‘The Handmaid’s Tale’ Recap: It’s Not That Easy, Being Free

Previously, on The Handmaid’s Tale: June and her friends escaped, got up to some murdering, got caught again, then escaped again, and it was a lot… We all got a reminder of the importance of respecting railroad crossings! And Nick looked conflicted but didn’t really do anything again! Here’s my recap for episodes 1 to 3 if you missed it.

This week: Go West! Life is peaceful there! June and her sole surviving sister in red, Janine, make for Chicago to join the fight against Gilead, but choose an uncomfortable form of transportation. Will Chicago be the Rebel Utopia they have been dreaming of? And why do I have a sudden craving for an enormous cookie? There are spoilers ahead for episode 4, so consider this your final warning. All aboard?

Ah, Dystopia Trains. In Snowpiercer, the Dystopia Train choo-choos through the snow, bearing the weight of human civilisation. In The Handmaid’s Tale, a Dystopia Train meant death to Brianna and Alma one week, and a promise of chilly pasteurised salvation to June and Janine this week. Do you represent life or death, Dystopia Train? Or the potential for both, neatly wrapped up in a metaphor about following the path in front of you? A symbol of the relentless cycle of misery in Gilead? Or a wry joke about how in Dystopia Land, at least the bloody trains run on time?

June and Janine follow the tracks to a station, spot a train headed to Chicago, and hop on board. In their rush to find a hiding place for the journey, they happen upon a refrigerated vat of milk, and June picks this for some reason. To be fair, no one would think to look for them there. But it’s freaking freezing! And when the train starts moving, it’s like the wave pool of nightmares. At least the hatch can be unlocked from the inside, but this was definitely a gamble. Fortunately, June pulls a plug and lets most of the milk out. Even more fortunately, it’s dark and no one notices the train spaffing milk everywhere. (I apologise for using the word ‘spaffing’ here, but ‘spurting’ and ‘gushing’ were the obvious alternatives, and they just felt spaff-adjacent.)

They won’t drown, but they might get hypothermia. Or just kill each other.

Janine: Do you have some secret, brilliant plan?

Oh Janine, you sweet summer child. June is improvising wildly, fired up with rage and a desire to hurt someone, anyone, who represents the system that has hurt her. She is the avenging angel she once dreamed of. But without a plan, or even a kill list, that raw fury threatens to burn anyone who gets too close. She lashes out at Janine, from guilt, impatience, frustration and grief, and it’s understandable but still cruel. Janine is frightened, grieving and feeling betrayed; it’s not just the refrigeration making this journey frosty.

June: I should have left you a long time ago.

Er, June, listen up: DON’T BE MEAN TO JANINE! You yelled at Serena Junior last week for being cruel to her; don’t pick on someone you see as weaker than you just because it makes you feel better for a moment. That’s bullying, sweetie. You’ve done it before, and you felt terrible about it afterwards. Make better choices.

Janine has suffered too. Like June, Janine has had two children stolen from her. The son she bore pre-Gilead died after he was taken, and June lied about it so that Janine wouldn’t despair. She has been beaten and mutilated. She tried to kill herself. She was sent to the Colonies for her lack of compliance. When Natalie / Ofmatthew was bullied by June so much that she broke, who got beaten to a bloody pulp by Guardians for the crime of standing nearby? JANINE. To paraphrase June’s own words from episode 1 and throw them back at her: “show some fucking compassion.”

Before Gilead, Janine was a rape survivor, and as this episode shows us, she was preyed upon by ghouls at a Crisis Pregnancy Center. People have been horrible to Janine for years, taking advantage of those wide eyes, and terrorising her into compliance. But she has also always been underestimated. She is tougher than anyone gives her credit for.

Just as well, because the train is ambushed as it nears Chicago, and our Wayward Handmaids find themselves needing to befriend an armed group of Americans, who have heard of Handmaids before, but never seen one in the flesh, let alone two emerging from a refrigerator. The rebels think they are a weird liability at first, but then it takes a turn for the unpleasant, because of course it does.

This group might be armed and attacking Gilead, but Mayday they ain’t. There’s no great plan here, beyond surviving in a war zone. When they look at June and Janine, they don’t see allies in the Great War; they see a usable resource. They don’t dress it up in religious dogma or gross euphemisms about emergency reproductive service. They don’t see rape survivors. They don’t even see “ambulatory chalices”. They see “sex slaves”. When June promises that they “can be useful”, there’s only one “use” that springs to mind for Chief Rebel Douchebag. “Nothing’s free here.”

June tries to protect Janine at first, but she just can’t subject herself to this again. It’s not fair; to be degraded and abused once more, when she thought the only predators were in Gilead… Chief Rebel Douchebag claims he’s not going to force her, but the alternative is leaving, and it’s as coercive as the ‘choice’ between serving as a Handmaid or being sent to the Colonies. Douchebags, douchebags everywhere.

As June sheds her Handmaid robes and grabs some civvies from the rebel stash (that’s the only freebie they’ll get), Janine quietly goes to see Chief Rebel Douchebag and offers her body as payment instead. NEVER BE MEAN TO JANINE! June apologises to her, and the conflict has dissipated between them. Their Handmaid days are done, but they are stuck in the land of differently awful for now. It’s not that easy, being free.

Serena has requested a visit from Rita, who is slowly adjusting to life in Canada. Gilead haunts her actions and her words at times, and this is seen in her interactions with Serena — at first, anyway. Rita is polite to Serena, deferential even; they were close for a while in Gilead, but although Serena occasionally spoke to Rita as if she were a friend and confidante, she was still abusive to Rita. Rita deserves better. When she arrives at Serena’s luxury hotel cell, it’s clear Serena is, once again, only thinking about herself. Serena hasn’t realised that Rita doesn’t have to be nice to her anymore. She might choose to be, but that is because Rita is a nice person. Serena does not deserve her loyalty. And praise be to Rita, she does not get it. Serena might claim she wants a friend, but she wants staff, and a useful ally. When she says “my lovely Rita”, there’s an unspoken emphasis on “my”.

Mr Tuello pays Rita a visit later, to inform her Serena has signed her up as a witness for her defence case. Ah, there it is. Serena is only ever strategically nice, and now that that has been cleared up for Rita, she gets her own guns blazing. No, she won’t be Serena’s bitch. She summons Fred for a meeting, and although she still calls him Sir out of habit or residual fear, she’s there for a power move. And some Truth Bombs.

Rita: You deal with your family. It’s not my job anymore. And I thank God for that every day.

Rita: I’ll pray for your son.

BOOM! Serena’s little secret is out! She’s going to be maaaaad!

If you did a rage-spit when Fred claimed he was “never cruel” to Rita, you are not alone. You owned her, dude! You have to go some distance to be the most unlikeable character in a show like this, but damn, Fred is that infuriating villain who will never believe they have done anything terrible, and will never budge from their position as The Worst. The other Worsts have dared us to wonder about their level of awfulness at times, but Fred commits. I respect that. But I also want to SEE HIM SQUIRM, DAMNIT!

After serving up all that TRUTH to her former captors, Rita goes home and has a lovely dinner that she didn’t have to cook. Way to go, Rita.

Next time: June and Janine adjust to life on the front line.