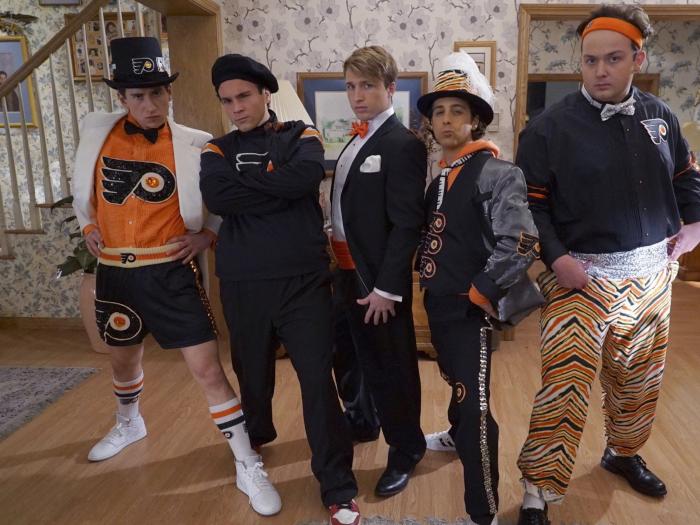 There have been a number of cast changes on The Goldbergs over the years. The show lost Pops when George Segal passed away, Murray when Jeff Garlin was fired, Lainey and Bryan Callen when the series spun-off Schooled, and of course, Adam’s girlfriend Jackie when Rowan Blanchard got too famous to continue appearing on The Goldbergs.

But you know who has been a steady presence for all these years? Three characters you could always depend on when the plot needed a contrivance, or if reaction shots for Barry’s shenanigans were needed. The Jenkintown Posse. JTP! You know them best as Andy Cogan, Matt Bradley, and Naked Rob Smith. I’m also going to provide the actors’ names because they deserve some appreciation: That’s Matt Bush, Shayne Topp, and Noah Munck, respectively. Geoff was also an original member of JTP, but after he got married, he basically cast his best friends to the wind.

OK, but here’s the thing: How many of our longtime The Goldbergs viewers could actually identify them by their names before I told you what they were? That’s because The Goldbergs do not treat JTP as real people. They’ve appeared on the series more times than Lainey — in over 90 episodes — but what do we know about them? About their families? What are their jobs? Dreams? Aspirations?

We know nothing, because The Goldbergs have never given these characters any agency. They don’t even exist separately from one another. Have you ever seen Naked Rob without Andy? Why does Naked Rob continue to wear his hat backward? Why can’t Matt Bradley have a girlfriend? Did any of the JTP even go to college? Are they just townies that exist solely for Barry’s benefit?

Dave Kim doesn’t get treated this way. In fact, in this week’s Halloween episode, Adam decided to pay a visit to Dave Kim at NYU, where Adam decided not to go because he wanted to hang out with David Hasselhoff. Dave Kim is making new friends. We meet Dave Kim’s new friends, who are all trying to reinvent themselves as people they are not, but that’s OK! Dave Kim is figuring himself out. Adam still lives in his childhood bedroom with his big brother, Barry. Sad. Dave Kim wins. But Naked Rob? He doesn’t get his own B-plot.

As for the A-plot this week? It’s exactly what I suspected would happen: Beverly is not just a terrible mother; she’s a terrible grandmother, too. I told you Geoff needed to run the hell away because Beverly was going to squeeze him out of his own family. That’s exactly what happened this week. Geoff was incapable of spending time with his own newborn child because every time he tried, Beverly had the baby, and Geoff had to ask for permission to hold his own baby. Unbelievable!

Beverly came around, of course, but only after Geoff dragged Erica out to the beach house to get away from Beverly, who followed along in a deranged ice cream truck because her grandbaby needed diaper cream. GO AWAY, BEVERLY. Has any show assassinated a character more than The Goldbergs has assassinated Beverly?

At least her character has the opportunity to be assassinated. The JTP, meanwhile, remain frozen in time, never to exist as anything more than reaction faces.