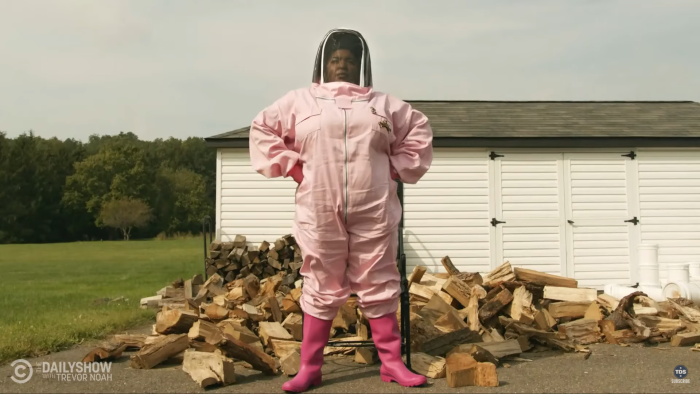 The Daily Show correspondent Dulcé Sloan took a trip out into the country to speak with Cam and Summer Johnson. The Johnsons are beekeepers and Black, which, depending on who you ask, is a rarity in the beekeeping community. Why would they subject themselves to such danger?! It turns out they are doing it to avoid danger!

Cam and Summer’s son, Zach, had really bad seasonal allergies. The family would constantly find themselves in the emergency room. However, thanks to their honey harvesting, they’ve been able to cure him of those allergies! Something that I, honestly, had no idea was possible. I would have been taking honey baths years ago!

Given the current climate around people using … holistic remedies, I did not expect to find myself moved by this story. I’ve tried all the regular medicines for allergies. Even the ones that work don’t always work (in my experience). It’s nice to know that the Johnsons found a natural medicine for their son that won’t, ya know, put other people’s children in danger.