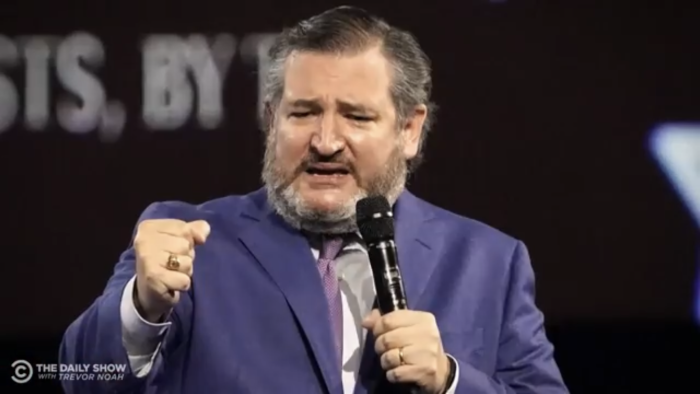 Nobody likes Ted Cruz. That seems to be an (objectively) indisputable fact. The Texas Senator is, as The Daily Show so accurately put it, a “Booger on the lip of Democracy.” Cruz is easy to not like and easy to take shots at, but you never get tired of it. In my opinion, it doesn’t happen enough. That’s why I happily watched correspondent Desi Lydic narrate a nine-minute-long video just demolishing the Texas Senator.

It’s hard to say what made The Daily Show take aim at Cruz this week. JK. CCruz decided to attack the Comedy Central comedy/news program last week on Twitter, got rightfully roasted, and is now getting roasted again. This is what happens when you try to mock people who are funnier, smarter, and more well-liked than you are.

What makes this video extra wonderful is the fact that they didn’t really have to embellish. Sure, there are some clips that Cruz could (and likely will) argue as being misinterpreted. For instance, at one point Cruz insinuates that his mother prayed for him for hours and we get a close-up of the look on her face when he says that and … you could argue that she does not agree. Aside from a few moments that could be debated, the video is top to bottom facts, sprinkled with people stating their disdain for Cruz. It’s incredible when all you have to do to dunk on someone is roll footage of things they’ve said and done.

My only problem with the video is that it made me relive one of my least favorite Ted Cruz moments (and possibly my least favorite “politician tries to act relatable” bit ever). At one point, Cruz did a video where he attempts, poorly, to imitate characters from The Simpsons (my favorite show and one that was recently, and rightfully, named the greatest sitcom of all time in a list by Rolling Stone, so, debate over). I won’t share the video, find it if you want, but it’s awful and he knows it. My guess is he and his people thought it would make him look human. Instead, it makes him look dumb and desperate for trying to attach himself to the greatest sitcom of all time (seriously, there are some weak seasons but after the movie, the show got better and has been on an upward trajectory since).

Ted Cruz is an easy target. Sure. He’s so disliked by everyone that I’m surprised it doesn’t happen more often. That doesn’t mean he shouldn’t be absolutely dominated like this more often. Especially since we know that his response will be to tuck his tail between his legs and make phone calls on the dominator’s behalf. In this case, that dominator is The Daily Show. It’s like the saying goes:
You don’t tug on Superman’s cape.
You don’t spit into the wind.
You don’t take to task The Daily Show.
And The Simpsons is the greatest sitcom of all time.


← Are Progressives Being Too Cautious? | Seth Meyers Knows What We Should Keep Doing Post COVID →