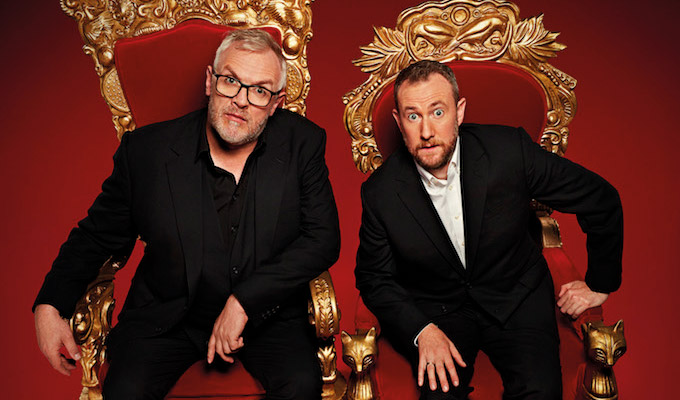 Who knows if it will stick or not, but with the fall approaching and the pipeline of new content running dry, plans for production restarts are being made. Overseas, some productions have already restarted; I’ve heard of two Ryan Reynolds movies restarting in September/October. Word is The Walking Dead is getting back to work in October, and weirdly, CBS’s SWAT was the first primetime network show to get back into production — shooting began in Santa Clarita yesterday morning. The Good Doctor was supposed to get started next week in Vancouver, where a ton of productions will restart in the coming weeks, but those have apparently put on temporarily hold due to COVID testing issues.

In any respect, with production restarting, new projects actually sound feasible (for now). And speaking of new projects, Comedy Central is set to revive The Ren and Stimpy Show, a reimagined version of the show 25 years after it went off the air. Presumably The Ren and Stimpy Show revival will not be associated with the show’s original creator, John Kricfalusi, who was accused in 2018 of grooming and sexually abusing underage girls, allegations he more or less admitted to (he could not be arrested as the statute of limitation had ran out).

Meanwhile, Sony TV is inexplicably set to revive Who’s the Boss with original stars Tony Danza and Alyssa Milano. It will “be centered around former major-league baseball player and retired housekeeper Tony Micelli (Danza) and his relationship with his daughter Samantha Micelli (Milano), who is now a single mother and living in the house in which the original series was set.” You might think that famous Republican Tony Danza working with famous Democrat Alyssa Milano might be weird in these divided times, but actually, Danza is a vocal Never-Trumper, so on that, at least, Milano and Danza can agree.

Elsewhere, Miramax is rebooting Guillermo del Toro’s Mimic for television screens. The movie is about genetically engineered insects who evolve and develop the ability to mimic their human prey. Paul W.S. Anderson will direct the pilot. (Side note: Even years after it came under different ownership, I associate the name Miramax with the Weinsteins. I don’t know why they don’t change that name).

In Sarah Paulson news, she says she will be directing an episode of the new American Horror Story spin-off, American Horror Stories, which is an anthology series in which each episode will be one self-contained story. No word on when production for that, or AHS season 10, or the next installment of American Crime Story, Impeachment, will begin. In the meantime, here is Paulson in the trailer for Ratched, a prequel to One Flew Over the Cuckoo’s Nest, set to debut next month.

Earlier this week, I wrote about the absolutely fantastic British panel series, Taskmaster, which The CW decided to air on Sunday nights. It lasted one episode, before The CW decided to drop it in favor of reruns of Supernatural. Honestly, I’m not that bummed about it — mainstream American audiences don’t deserve Taskmaster. It should be reserved for those who seek it out. I wasn’t ready to share Little Alex Horne with the rest of the country, anyway.

Finally, I have never heard of Giovanni Cianci, but he’s been the music booker on The Late Show with Stephen Colbert since 2017. He’s been fired after reports surfaced that he assaulted and harassed musician Paige Stark, both in person and for months on social media.