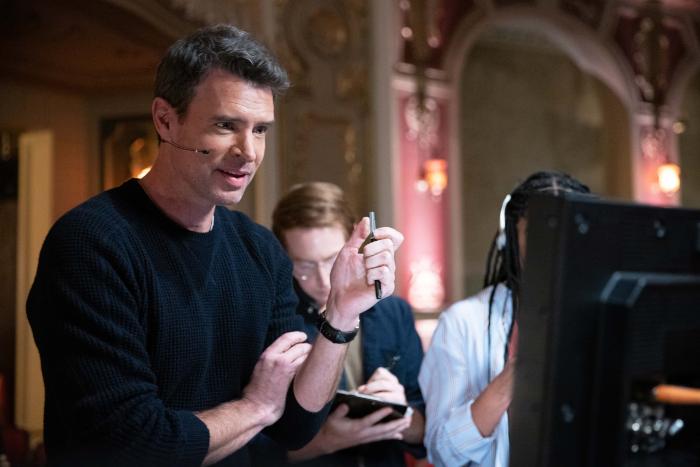 The Big Leap is not good for you, but my god, does it feel good. It’s like a big old Dunkin Donut for your heart. It is an “inspirational drama” slathered in cheese, like grown-up Glee with dancing and unbelievably attractive people. Scott Foley: Hot. Teri Polo: Hot. Piper Perabo: Hot. Ser’Darius Blain: Hot. Simone Recasner: So hot. It’s a drama about a reality show featuring nothing but underdogs, including goddamn Jon Rudnitsky, who no one remembers from Saturday Night Live and who I didn’t even realize was Jon Rudnitsky until I checked the IMDB credits. It’s a weeper, but not in that sad way. In the kind of way that features inspiring moments and manipulative pop songs, and people achieving their dreams, but it’s cut with just enough mustard not to feel too Hallmarkian. It is a salve, y’all. A big dumb wonderful salve with just enough cynicism (provided by Scott Foley’s character, so hot) to keep it from getting out of hand.

The Big Leap centers on a fictional dance reality competition in which 20 amateur dancers are selected to put on a performance of “Swan Lake.” But as Scott Foley’s executive producer character, Nick Blackburn, reminds us repeatedly, it’s not about dance or ballet. It’s about creating stories and manufacturing drama.

There’s Gabby Taylor, a single mom trying to regain a dance career she lost when she had a child right after high-school. She’s smitten with Reggie (Ser’Darius Blain), an NFL player suspended for inappropriate off-the-field behavior and looking to rehab his image through a feel-good reality show. There’s Julia Perkins (Teri Polo), a middle-aged mom whose marriage is falling apart because her husband has a porn addiction. Rudnitsky’s Mike Devries is a lovesick out-of-work factory worker trying to win his wife back; he is paired up with Paula Clark (Perabo), the woman he doesn’t know put him out of work. Raymond Cham Jr. is Justin Reyes, an amazing street dancer with a lot of internalized homophobia. Mallory Jansen is Monica Sullivan, the Simon Cowell-like dance instructor who hates everyone, but is into booty calls with Nick, a soulless executive going through a divorce and custody battle who possibly has a heart somewhere deep down. He’s trying to rebound from another reality show that he let get away from him that nearly resulted in someone’s death.

The series operates like Unreal — the drama about the behind-the-scenes machinations of a dating show — only here, they’re cynically trying to create a show about second chances with mass appeal to middle America. But everyone involves seems to be aware of this; they’re attuned enough to reality show conventions to understand their roles, which allows the show to both play into those conventions and gently subvert them. It’s smart, but not too smart, because it’s a feel-good drama on Fox.

Indeed, creator Liz Heldens (Friday Night Lights), a television writer who has been around for a long time, knows enough about TV to know what audiences want, and so created a reality show about catering to those audiences while catering to that audience. We want impressive dance numbers, underdog stories about broken people (but not too broken), and big feel-good moments, and we want someone to give us the illusion that the huge Dunkin Donut is good for us because someone spiked the glaze with an imperceptible amount of wheat germ. That’s exactly what the Big Leap is, the exact kind of show that will be great for 10 episodes and run on fumes for two more seasons.

The Big Leap airs Mondays on Fox. The first two episodes are available on Hulu now.


← The Exit Strategy Is Death: 'LuLaRich' on Amazon Prime | Bill Maher Wants You To Know That He Lives In A Pretentious, Privileged Fantasy World →