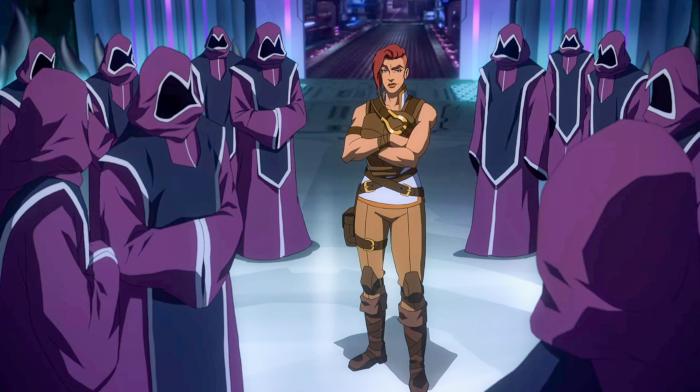 The Best Part of Kevin Smith's 'Masters of the Universe: Revelation' Is the Pathetic Fanboy Hate

Let’s get the nitty-gritty details out of the way first. Masters of the Universe: Revelation is a perfectly fine cartoon brought to Netflix by Kevin Smith. It’s a reboot of the original 1983 series Mattel created to sell toys. The expected cast is present: Prince Adam (Chris Wood) and his parents; Teela (Sarah Michelle Gellar) and her adoptive father Man-at-Arms (Liam Cunningham); Cringer (Stephen Root) and Orko (Griffin Newman). On Snake Mountain’s side, there’s Mark Hamill as Skeletor, Lena Headey is Evil-Lyn, and their usual cadre of minions including Trap Jaw and Beast Man. There’s also Andra, a new Black character played by Tiffany Smith. 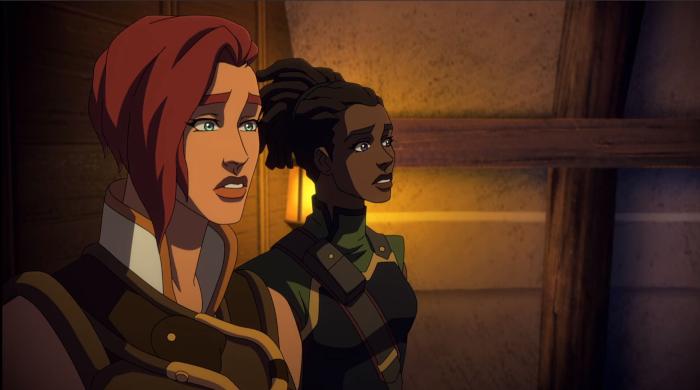 In Part One, released as a 5-episode batch yesterday by Netflix, Prince Adam and the Masters respond to an emergency at Castle Greyskull. Skeletor, Evil-Lyn, and their lackeys have attacked yet again, disguising themselves to gain entry. Skeletor kills Moss Man in the resulting battle, immediately upping the stakes from the original animation. Enraged, He-Man puts the Sword of Power through Skeletor’s chest - and straight into an orb that contains all the stored magic of the universe. The resulting explosion seemingly reduces both He-Man and Skeletor to ash, and Eternia’s magic drains away. This is not a good state of affairs in a world full of beastmen and sorceresses (sorceressi?). Teela, outraged her father and friends knew Adam’s secret while she remained in the dark, abandons her duties as Captain of the Royal Guard and adventures on her own. She meets Andra, an engineer and warrior. The two travel together until they’re hired by a mysterious old woman to retrieve a goblet from Snake Mountain. One thing leads to another and soon Teela, Andra, and some familiar faces are on a quest to restore the Sword of Power and thus Eternia’s magic. Facing off against them are Tri-Klops, Trap Jaw, and other Snake Mountain minions who have replaced Skeletor and magic with a fanatical devotion to technology. 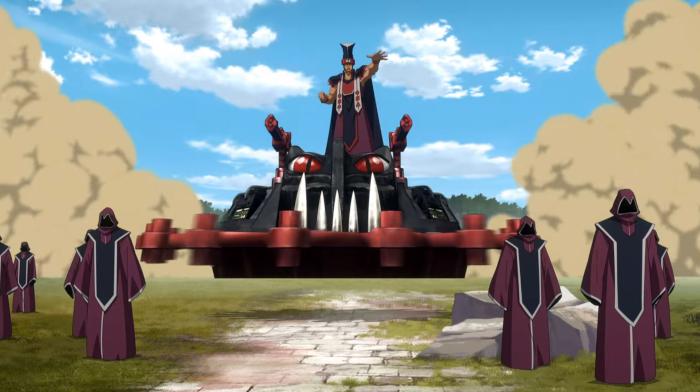 The animation is reminiscent of Netflix’s Voltron: Legendary Defender or Castlevania and high quality. The landscape is a riotous, alien world full of reds and purples. The characters are crisp and well designed, a mishmash of techno-organic body parts and accessories. Most of the voice acting is top-notch. Hamill obviously enjoys playing Skeletor and basically does a deeper, more gravelly version of his Joker. Lena Heady is also great as Evil-Lyn, which is good because she gets a lot of screentime. Likewise Tiffany Smith as Andra. Sarah Michelle Gellar is a bit monotone as Teela, unfortunately. I don’t think it’s entirely her fault; the dialogue switches wildly between goofy one-liners and melodrama, and it’s not always a smooth transition. No one could speak the line “Pay no mind to life advice from the likes of Evil-Lyn” and have it sound anything but absurd. The series is appropriate for most ages, from those of us who were annoying little brats demanding He-Man action figures in the early 1980s to our own children. It’s fairly violent - several people get stabbed onscreen, and someone takes a circular saw blade to the face off-camera. There are a few adult jokes (“no glove, no love”) but they should sail right over the heads of most kids. The rest of the puns, terrible in the best Dad joke way, are family-friendly. Kevin Smith’s sense of humor and enormous heart show themselves clearly, and that’s a big plus in my book. Bottom line: if you were a (rational) fan of the original He-Man and the Masters of the Universe, or you enjoy modern animation, or you like action-packed stories featuring kickass women, you should watch this show. 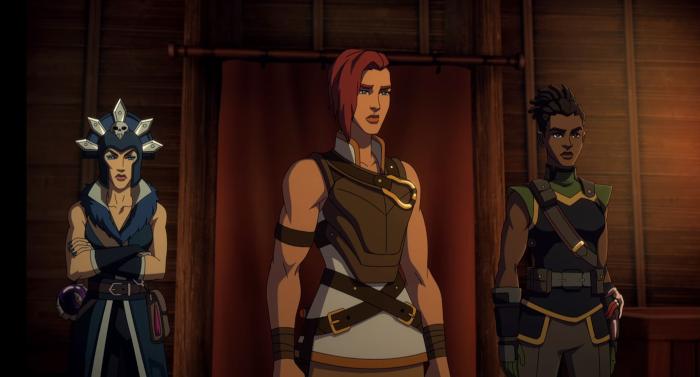 Who shouldn’t watch Masters of the Universe: Revelation? Great question, and it brings us to the title of this piece. It’s a cartoon, right? Harmless, ephemeral entertainment. People got together and wrote a story, then other people gave voice to the characters, and a group of animators brought it to life. Depending on your worldview it’s either a love letter to the artistry of Frank Frazetta, or a cynical rip-off of Conan the Barbarian, a hyper-muscular homoerotic character pimped out by Mattel to sell plastic chunks to desperate parents. That’s it. But for a certain segment of the Internet - and you know the one I’m talking about - Masters of The Universe: Revelation is the equivalent of Kevin Smith sodomizing their childhood dog. He-Man “superfans” are review bombing Rotten Tomatoes like they do any time they catch the scent of estrogen near their precious nostalgia. You won’t be at all surprised to know the most clever insult they’ve come up with is “It’s the He-Man version of The Last Jedi.”


This is actually kinda flattering. Both @TheBoysTV & @captainmarvel went through this too, so I’m in good company! The review-bombing is transparent, so luckily it’s not gonna trip us up. But do you know what *can* trip us up? My untied @PUMA Skeletor sneakers from @footlocker! https://t.co/krvybusU3z pic.twitter.com/nN2gHUj8j6

What’s their complaint? Long story short, Teela’s too much the focus, her reaction to finding out her family and friends lied to her is “out of character,” and she’s too butch because she got some muscle definition and a new haircut. They dislike the emotional development and think the characters sound like ungrateful shrews. This petulant article from Cosmic Book News in June sums up the complaints pretty well, though I don’t recommend reading it lest your rolling eyeballs leave their sockets entirely and bounce across the floor. It stems from this message from Kevin Smith in March of last year.

As showrunner, I really could’ve used these story suggestions *before* we locked the scripts. However, no - He-Man does no stepping aside and Teela has no girlfriend in our show. The storyline is pretty dark and way metal. Before REVELATION we were calling it END OF THE UNIVERSE. https://t.co/0y5TlhjctC

Now, all of that is true. Teela doesn’t have a girlfriend, though some glances between her and Andra are open to interpretation. He-Man does not step aside - he blows up. This is, after all, only Part 1 of the first season. 5 episodes. The entire back half of the season is yet to be released, and if our obsession with cartoons and comic books taught us anything, it’s that no one is ever permanently dead unless you see the body.

#Teela shaves her head, Eternia the planet is dying and all the women have to band together to save the Universe. Along the way they mostly complain how the men in their lives either lied to them, used them, or held them back. pic.twitter.com/H2fhzdvBnZ

But the facts don’t matter. Any more than it matters that the show is not even called He-Man, but rather Masters of the Universe. All of whom are present and center stage in this production. Like the criticisms of She-Ra and Captain Marvel, like the inevitable future criticisms of She-Hulk, the characters as portrayed do not match the ideal of a particular fanbase, one catered to for its entire adolescence. It’s not entirely their fault; clearly intimidated in their childhood by the likes of Red Sonja (Brigitte Nielsen) and Zula (Grace Jones), sexual repression led them to this. Now if they see a well-defined female tricep, the back of their necks prickle and their sphincters clench up like a balloon knot. The irony that this same set of fans spent days fantasizing about getting stepped on by Lady Dimitrescu of Resident Evil: Revelation is not lost on me.

To be fair, I do have my own subjective viewpoint. Maybe I’m putting my own spin on fan reactions. It’s not like the Top tweets about Teela are a simmering stew of misogyny and synthetic testosterone, right?

After watching all of Revelation and reading the bilious response from the very vocal hater contingent, I went back to the original series. Surely I was missing something, some integral piece of the puzzle that explained such deep resentment. Nope. It’s bad animation and stories cobbled together from random words. The puns are the same, though. It’s amazing that people get this worked up about anything on television, let alone the “integrity” of characters who can’t even fall down without looking sultry. 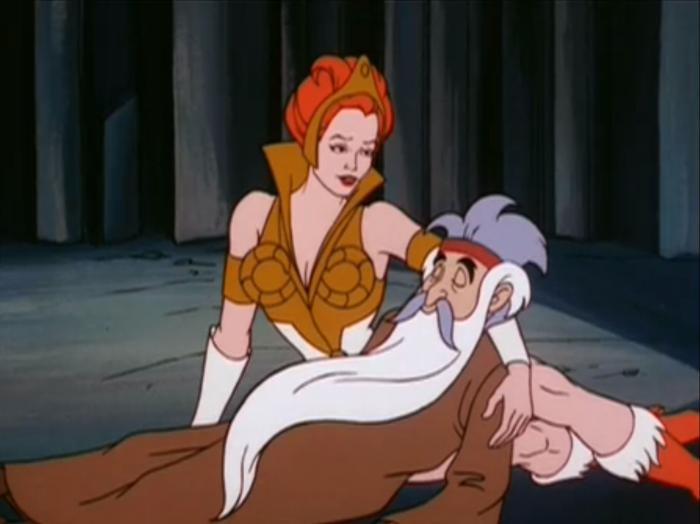 So who shouldn’t watch this show? I would say any male over the age of 13 who still breaks into a sweat if they come across an old episode of Xena: Warrior Princess. Anyone who thinks stories should never evolve in the 40 years since their creation. Anyone who thinks there is a moral imperative for creators to produce exactly the content some viewers expect in their sepia-toned nostalgia. Anyone who thinks Kevin Smith owes them something. If this sounds like you, I recommend a month’s free trial to Starz, where you can stream the entire 1983 version of He-Man and the Masters of the Universe to your heart’s content. I bet you can still find some He-Man Underoos on eBay, should the mood strike you.

For the rest of us, back in the world where cartoons function as an enjoyable waste of time, Masters of the Universe is a fun diversion. Gorgeous visuals, talented voice actors, and the interesting evolution of an outdated premise add up to a good time. 5 episodes feel like a really brief chunk, and the cliffhanger ending is abrupt. I believe that once the whole first season is out, things will flow a lot better. Kevin Smith has provided a great starting point for new fans, and fleshed out 2-dimensional characters with actual human behavior and emotion. 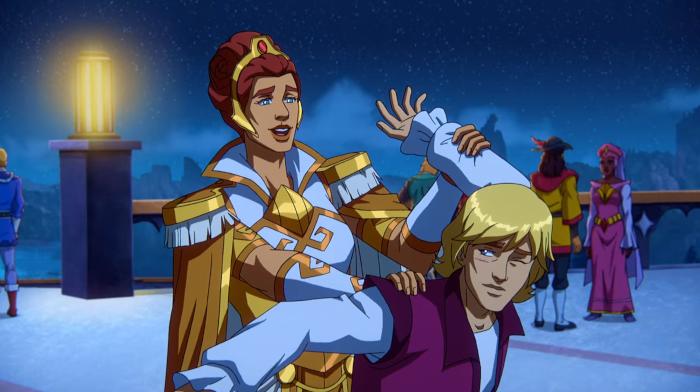 Part One of Masters of the Universe is available on Netflix.

← Start Your Week Off Right By Watching Amber Ruffin Skateboard With Tony Hawk | Watch the Trailer for the 'Dexter' Revival, The Show You'll Watch Even Though You Swore It Off →