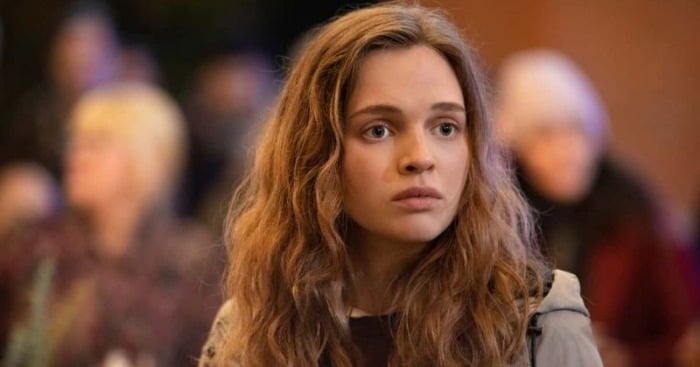 The Baffling Religious Dogmatism of CBS All Access's 'The Stand'

The Stand is a book that I’ve always had a somewhat complicated relationship with. I think the first half is good, the coda to the first half is GREAT, and the second half is middling to boring. There’s no particular ending. There’s a climax, and then a whole bunch of stuff just sort of keeps happening. This works in The Lord of the Rings because it’s a sprawling war epic where the end of the conflict is not actually the end of the story — that’s sort of the point — but in The Stand, the end of the conflict IS the end of the story as it’s framed in the book. Just, for some reason the story doesn’t stop there, it meanders around telling a drawn-out denouement that could have been condensed into an epilogue. The one positive thing I will say about the end of the recent TV adaptation of The Stand is that it cuts most of that post-climax out.

And replaces it with another, worse one.

(Spoilers for the end of The Stand, both the 2021 miniseries and the novel, will follow.)

I’m sure there are some of you who are reading this to satisfy your morbid curiosity as to how the show actually ended. I started to write a recap but it got unwieldy so I invite you to peruse the episode summaries on Wikipedia if you need to know. I’ll wait.

Back? OK, good. One of the things I found most frustrating about the last two episodes is that the somewhat delicate handling of the nature of “God” as it exists in the book is completely upended by the show. A literal “hand of God” arrives in Vegas to smite the wicked in general and Flagg specifically, before turning a bolt of lightning on the nuclear warhead recovered by The Trashcan Man. Even worse is the back half of the finale, when Frannie falls down a well in Nebraska and encounters Flagg while unconscious between life and death. After refusing to let him save her life in exchange for becoming his agent, she then comes upon a vision of Mother Abigail, who assures her that she will live and her children will repopulate the earth. And then a mysterious Black girl shows up to feed Frannie’s baby while they wait for Stu to get back, helps Stu rescue her, and miraculously heals all Frannie’s injuries before vanishing into thin air, continuing the trope of a magical Black character saving the white characters whose stories are given primacy. The book epilogue, where Flagg shows up near an uncontacted tribe, remains intact.

While I felt like the religious message of the book was muddled at best, I think that the way the split between the Boulder and Vegas settlements was at least consistent. Vegas is ruled by a showman, a figure who has a symbiotic relationship with his followers. The more they believe in him, the more he is able to make them believe. The people of Boulder, meanwhile, are left to interpret dreams and vague messages. Mother Abigail believes she has a conduit to God but even her pipeline is not reliable and works in mysterious ways. Tom Cullen has visions of Nick that help him save Stu’s life that could be considered an angelic message, but the workings of Tom Cullen’s brain are a bit mysterious in the novel which is a different problem. The central idea seems to be that the people of Boulder are CHOOSING good but it is, and always remains a choice. There’s an implication that an act of god explodes the warhead that is brought to Vegas in the book’s climax, but it’s also an incredibly unstable warhead that was dragged across the desert by a madman slowly succumbing to radiation sickness. You don’t really need an EXTRA reason why it goes off. By bringing God into Flagg’s casino as a ball of lightning ripping apart the wicked and Flagg himself before striking the warhead, and then bringing in an angelic child to heal Frannie’s wounds before disappearing into the wind, the show made God into something out of the Old Testament instead of the active choice of the individuals in Boulder.

If Flagg has no power without the fear and awe of his followers, what does it mean that his opposite literally smites the wicked and sends angels to aid his Chosen? What does it mean for the rest of the new world that Frannie and Stu are bringing their family into? Will God always appear to save their bacon or was this a limited-time offer to finish off Flagg and keep Frannie alive? Was Captain Tripps a new version of The Flood? Instead of the fire, was it the virus? Will Stu receive a new Ten Commandments? If the child version of Mother Abigail who appears to save Frannie can heal wounds, why doesn’t the adult version have that power? By bringing a more explicit God figure into the story, it invites questions about the nature of God in this post-Captain Tripps world and the nature of God in the pre-Captain Tripps world as well. How can a God that would save Frannie so explicitly have allowed billions of people to die of a horrible disease? If God was capable of killing Flagg, or at least temporarily neutralizing him, why did God wait until that moment to do it? If God is a passive force that simply represents humanity choosing the good then these are questions we don’t ask. If God is an active force that interferes in the lives of humans, then there’s a lot more that God has to answer for.

I was not a fan of this adaptation of The Stand in general. The decision to muddle the timeline was hugely disruptive in generating a solid sense of the characters or their stories, the plot felt rushed and hard to follow, and the ending does not correct the problems from the books but rather introduces a whole new set of frustrating problems in an ending written specifically for the miniseries by King himself. Perhaps the time for that particular story has passed, as we sit here in a global pandemic in the real world. We know there is no Flagg to blame, just as there is no manifestation of God to save us. There is only the will of individuals choosing to do the right thing, each day, with little to no tangible reward. That, at least, is still true.

← It Is Possible to Be Too Crowd-Pleasing? HBO's 'It's a Sin' Tests the Limits | 'Firefly Lane' Review and Ending: Annoying, Frustratingly, Obnoxiously Watchable →