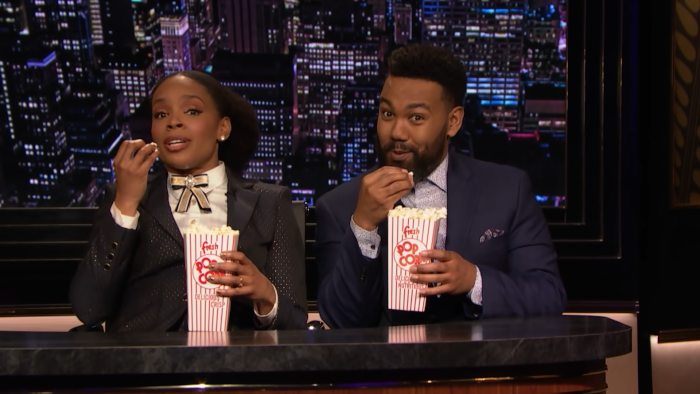 Vladimir Putin is still waging an unjust war on Ukraine. His attacks have produced death, violence, and a series of reporting gaffes about the death and violence occurring. Several reporters have gone out of their way to label the events in Ukraine “shocking” because it’s in Europe and not the Middle East or Africa. You can likely figure out the differences between the nations pretty easily. The folks at The Amber Ruffin Show certainly did!
In the newest episode of the show, Amber and her trusty cohost Tarik sat back to watch a reporter make the same mistakes we’ve seen again and again. Watching Amber and Tarik react to the reporting is as close to gold as you can get in this show. Their chemistry is just off the charts. You want to be right there with them, laughing as the reporter goes out of his way to describe Ukrainian children as blonde with blue eyes.

I’ve seen this terrible trend pointed out on other shows, but The Amber Ruffin Show puts their stamp on it. They know exactly what kind of show they are and not only do they embrace it, they revel in it.

The more Amber Ruffin Show we get, the better we’ll all be.


← Watch the Trailer for 'Deep Water,' the Psychosexual Thriller that Brought Ben Affleck and Ana de Armas Together | 'Super Pumped' and the Egregious Miscasting of Joseph Gordon-Levitt →