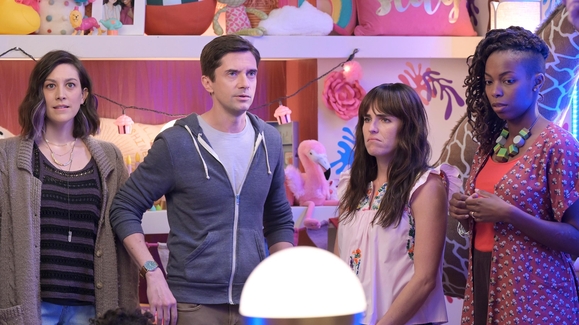 HBO did the expected this morning and picked up what is now its flagship series, Succession, for a fourth season, only two episodes into its third season. HBO did not indicate it was the fourth and final season, although Brian Cox believes there are likely only two seasons left.

CBS has picked up Ghosts for a full-season order. Having reviewed it recently, I learned firsthand both how passionate fans of the original British series are — who have spoken ill of the remake — as well as fans of Rose McIver, all of whom are excited about the pick-up. That iZombie has a hell of a following.

Meanwhile, ABC has picked up a full season order of The Wonder Years and the second season of Home Economics. The Wonder Years reboot is OK, although Dule Hill is sorely underutilized (Saycon Sengbloh, who plays the mom, is fantastic). It’s not as heartstring pully as the original, but it has provoked a lot of conversations about race in my house. Also, once we had to explain to the twins what a condom is, so thanks?

Home Economics is my favorite sitcom on network television right now, which speaks to the quality of network sitcoms these days. Don’t get me wrong: I like it, and there’s a lot of great chemistry between the cast, but there’s hardly anything inventive or novel about it. Network television comedies, alas, are a dying breed.

In streaming, Apple TV+ recently renewed Foundation for a second season, which is good because they’ve probably already sunk tens of millions of dollars into the sets. I haven’t written about the series yet, in part because I haven’t decided what I think. I like the first three episodes but like the Isaac Asimov book (but for very different reasons), it’s starting to drag. Hari Seldon (Jared Harris) is the best part of both the novel and the series, but in both cases, he quickly becomes a minor presence. Lee Pace sure is pretty, though.