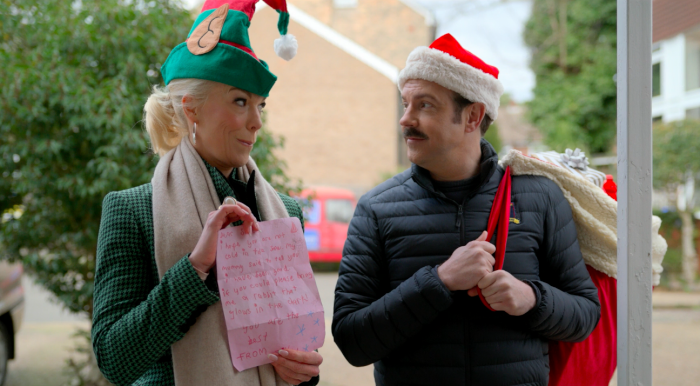 It’s Christmas time at AFC Richmond! With the episode opening with a cheery Secret Santa, complete with team captain Isaac McAdoo presiding as Santa, all seems merry and bright. Back in the coaches’ office, the crew prepare for the whole squad to take a half day to not only take time out for the holiday, but to rest up for the next match which falls on Boxing Day, which will hopefully revive their less-than-stellar season (any guesses on who’s responsible for the ‘D’s Nutz’ joke on the whiteboard?). In the meantime, however, everyone is simply looking forward to their planned celebrations, big and small.

For Keeley, it’s all about establishing a new Christmas tradition for her and Roy. Known as “Sexy Christmas,” this holiday is going to be a swinging, Sinatra-style time. It’s all about nifty light fixtures, martinis, chocolate fountains, and, of course, lots and lots of sex. Outfitted in nothing but a sheer red number with bra, panties, and matching heels, Keeley goes to the door to greet Roy, only to find a distraught Phoebe standing outside instead. As it turns out, Roy’s sister was called into work, so Phoebe will be spending Christmas with her uncle. To Keeley’s credit, she takes the news with nothing but grace and sympathy for this sweet girl. It’s decided that Sexy Christmas will be postponed, although Roy’s reaction when he sees Keeley in her outfit strongly suggests they’ll certainly make up for lost time.

At the Higgins’ household, Leslie and his family are opening presents around the tree. As we learned earlier, Leslie has a tradition of inviting players over who don’t have family in the area, and when the doorbell rings with Sam Obisanya on the other side (with an offering of jollof rice and chicken; your table’s about to be blessed, Leslie, but you should learn to get down with goat), it’s smiles all around. While Sam bonds with Terry, the youngest Higgins, the bell rings again, this time with Dani Rojas, Jan Maas, and Richard Montlauer (with his unnamed date, who is presumably a model of sorts because whoa) on the other side, all of whom bring traditional holiday food from their respective countries. Well, except for Jan, who simply brought fried chicken out of what I’m guessing was either out of efficiency or a belief that the English are very fond of fried chicken (feel free to chime in, readers). Then Thierry Zoreaux arrives, and soon we’re having a full-fledged house party, complete with a dramatic Nerf gun battle in the living room. Dani and Thierry have a great bit together (“Tell my incredibly beautiful wife I love her.”) as they prepare for a counterattack. Alas, they were unprepared for a sneak attack and wound up being ruthlessly murked by young Terry. Although each of these players are a long way from their family, the bond that they’re creating with one another is a pleasure to watch.

Speaking of folks who are spending the holiday far from their loved ones, Ted is making the most of Christmas by opening presents with his son over FaceTime. Unfortunately, it escaped Ted that when a child gets an awesome Christmas present, the first thing they want to do is play with it. With his holiday plans cut short, and feeling more than a little depressed about it, Ted takes to drinking whiskey and watching It’s a Wonderful Life. I’m sure I speak for more than a few of us when I say that this looks worrisome. Thankfully, a Christmas miracle that goes by the name of Rebecca Welton makes a surprise visit, recalling what her first post-divorce Christmas being alone felt like, to take him away to an as-yet unknown location. They take a brief pause in front of some buskers, where Ted drops a handful of change into their tip hat with Rebecca following suit, only she drops what looks to be about £100 (“I guess that’s what I get for taking a tinkle next to John Holmes.”). Soon the pair arrive at an apartment building, with Ted lugging a literal sack of presents. It’s unclear when or how Rebecca became the recipient of children’s Santa letters; all that matters is that seeing her and Ted go door to door as Santa’s “elves” dropping off presents to kids (“Am I getting notes of Beijing?!” is perfectly delivered) is incredibly sweet and yet another example of Rebecca’s generous nature. She proceeds to tell Ted how this is a tradition for her, though she skipped last year in the wake of her painful divorce. Once they get back to the car, Ted presumes that the next thing on her itinerary is to drop him off and head over to Elton John’s party, but Rebecca has other plans in mind.

Meanwhile, back at Keeley’s, it’s clear that something is wrong with Phoebe. When Keeley and Sir Break-Heads-A-Lot question her, the normally chipper little girl is withdrawn. It takes a while, but she finally comes out with it: a classmate named Bernard gifted her with toothpaste and mouthwash while telling everyone Phoebe has terrible breath. Unfortunately, the accusation is as much based in reality as it is lacking in manners and tact. This adorable wee girl’s breath is so bad that you can almost see Keeley’s hair curl at the stench of it. Roy, God bless him, does his damnedest to keep a straight face, but when his eyes start to water, he’s forced to admit something is off, croaking, “I think you might be dying.” It’s obvious to both of them that this isn’t just an everyday case of bad breath, this is something medical.

Roy decides that they’re going to go knock on doors until they find a dentist in his neighborhood. It’s a sweet gesture, even if it is ludicrous to imagine someone knocking on your door to ask for that kind of service on Christmas day. But knock, they do, taking a moment to ease Phoebe’s embarrassment over the situation, which grants us yet another amazing Roy Kent moment in which he tells her about a time when he over-estimated his ability to tolerate dairy and shat himself on a bus…recently. Seeing an adult she admires admit to something like that—along with the young fan who overhears (“I do too, sometimes.” “Well, let’s both try to knock that off, shall we? If you can do it, I can do it.”)—helps buoy her spirits. When they finally come upon a (deeply understanding and amiable) dentist, she figures out that Phoebe’s troubles are a side-effect of the antihistamine she’s recently begun taking. A few family photos (and one slightly skeevy comment from a young man, who is almost surely the “ussie” kid on the plane in the series pilot) later, and the trio head to the pharmacy for some medication. At the last minute, Roy also requests some poster board and markers.

Look, I know. I know that the Love Actually nod invoked the screams of dozens of Pajibans. If you hated this bit, that’s fine. We’ll reconvene next week. But if you’re like me and felt completely charmed by the sight of Phoebe expressing her hurt feelings and forgiveness to Bernard as an apologetic Keeley and a glowering Roy stand behind her, feel free to sit down next to me on the “Huge Saps” bench.

But nothing made me melt into a puddle quite like seeing the huge soiree at the Higgins’ home. Much to Julie and Leslie’s amazement, more and more players kept showing up. That many unexpected bodies require quite a bit of seating improvisation (the surfboard and pool table were a nice touch), but it’s more than worth it. We know that this new conviviality is a pleasant side effect of Ted’s presence, and although he’s brought plenty of warmth and goodness to AFC Richmond, that sort of influence can’t draw out what isn’t already there. Which is why when Leslie stands up to toast his family and the players, acknowledging each of their cities and, with it, the distance they’ve come and sacrifices made to pursue their dreams, this moment perfectly illustrates Leslie’s pure heart. “To the family we’re born with, and to the family we make along the way. And, most importantly, to Richmond!” he cheers, making him the emotional MVP of the episode. In one last stroke of holiday cheer, Rebecca and Ted, with the help of the buskers they encountered earlier that day, set up a makeshift stage outside and begin playing Darlene Love’s “Christmas (Baby, Please Come Home),” with Rebecca on the mic (because with a voice like that, why wouldn’t you have Hannah Waddingham sing once a season?). The party quickly spills outside, with everyone dancing, playing instruments, and experiencing the joy of simply being with one another.

Maybe it’s because of the Christmas theme, but this was certainly the most unabashedly adorable, admittedly leaning towards saccharine, episode in the entire series. But hey, if you can’t go full-blown optimistic happy feelings during a Christmas special, when can you? If I had to guess, I would say that this will wind up being the most divisive episode of Ted Lasso thus far. Personally, I’m more than happy for the squishy feelings and shot of serotonin, even if the Santa sled at the very end there was over the top even for me. Feelings aside, there were some definite strengths in this episode, such as seeing what amazing caretakers Roy and Keeley are, though the best thing is seeing Julie’s character get more developed. I hope we see more of her, even if it’s for brief appearances. With all the holiday spirit, there was no forward movement with the storyline, which means that we will almost certainly see some serious action next week. Whether it’s the kind that brings us joy or sorrow remains to be seen.

Leslie: “So, Sam, back home what does Christmas make you think of?”
Sam: “Colonization.”

Roy: “What have you got to be sad about? Did one of the Paw Patrol dogs die?”

Kaleena Rivera is the TV Editor for Pajiba. When she isn’t wondering what it would be like to see Daniel Craig and Rachel Weisz perform a puppet show, she can be found on Twitter here.

← Vincent Kartheiser Investigated for On-Set Misbehavior For Basically Being Pete Campbell | Baseball for the Nostalgic: MLB at the 'Field of Dreams' →