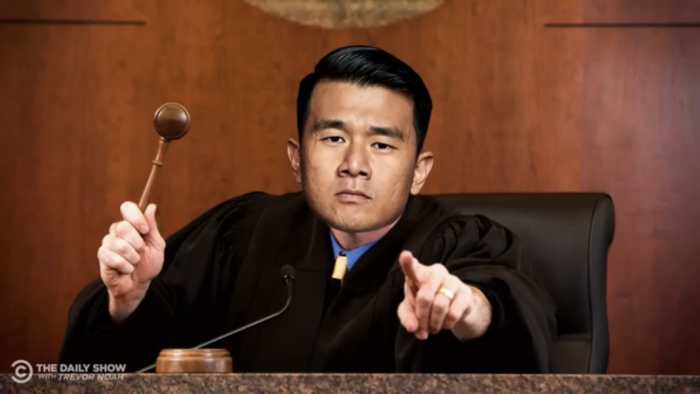 Hey, f*** you (sorry, just staying in theme)! America’s latest problem is so popular, it’s all the rage (ehhhh). Daily Show correspondent Ronny Chieng took a dive into those rage issues this week to find out where they come from and the answers may surprise you!

Chieng sat down with conflict researcher at Yale, Dr. James Kimmel (fun!). Kimmel claims that rage, specifically political outrage, can be addictive. Turns out that we like to think that we were wronged. Kimmel claims that Trump helped foment this addiction to rage and people like him are continuing his s***ty legacy of agitation.

Kimmel does have a solution. Put people on trial in your mind. Take those who wronged you to task (in your mind) and then forgive them. Sounds perfect! JK, we find out in real-time that the solution won’t be this easy.

Ronny also sat down with retired mental health counselor Jeffrey Guterman. Guterman claims that he was often one of the first people to respond to Trump’s tweets with his own angry response. Coincidentally enough, Guterman did not care for the angry responses he would receive in return, which would lead him to other angry responses. Oh what a tangled web etcetera.

Cheng decided to try Kimmel’s anger solution on Guterman and (say it with me):

It did not work. Guterman refuses to let go of his hatred for Trump which, honestly, I get. Unfortunately, if I was a bettin’ man, I would wager that most Americans are like Guterman. We love our anger and we love to direct it at people we hate. You think we’re just gonna let it go because we play out a My Cousin Vinny scenario in our heads?! We look like a bunch of stupid yutes to you, Kimmel?! Gah!!!

← Trevor Noah Gets to the Heart of the Chrissy Teigen Matter | Starz 'Blindspotting' Review: The Movie's Best Character Gets Her Own Series →