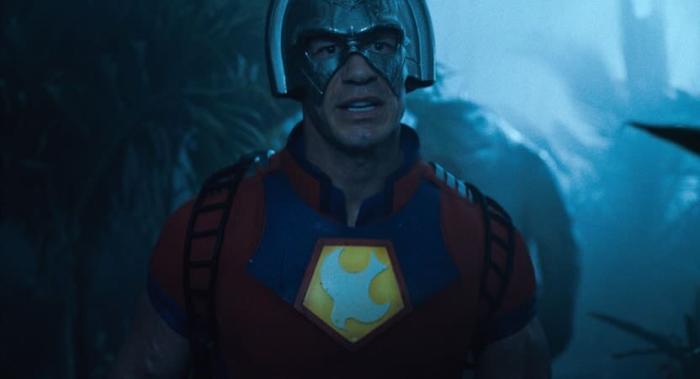 Unless you’ve been living under a rock you’re aware that the James Gunn-helmed The Suicide Squad mulligan premiers in theaters and on HBOMax this Friday. About a month ago, TBS started teasing an episode of its fast-paced obstacle course show, Wipeout, that would feature members of The Suicide Squad. ‘Cause, you see, John Cena is one of the hosts of Wipeout, and is also starring in The Suicide Squad as Peacemaker. So, it makes perfect sense that he would go all out to promote his new movie on the show last night. Except that it was a just a lame, over-hyped marketing stunt that left me LESS excited to watch the movie than before the episode aired.

It turns out that “feature” meant splicing-in snippets of the movie and pre-recorded videos of co-stars Nathan Fillion (TDK,) Daniela Melchior (Ratcatcher,) and Joel Kinnaman (Rick Flag.) James Gunn did make an ACTUAL appearance. He “auditioned” Nicole Byer for the movie and outshined Cena in the cue card reading department by a mile. The only part of it that wasn’t embarrassingly awkward was Nicole Byer’s thirst for Idris Elba. Because we all get that. 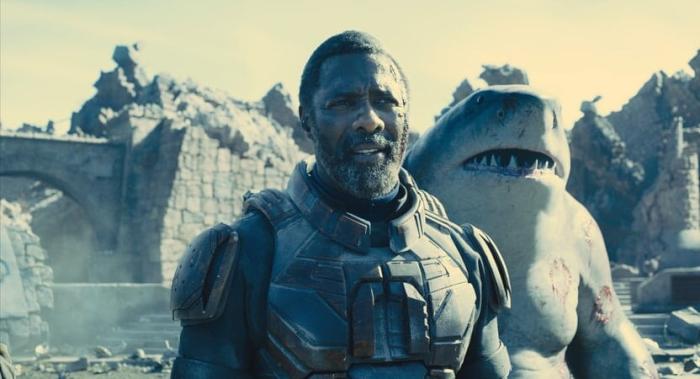 There were also a lot of King Shark jokes that involved CGI fins and blood in the obstacle course pool that never really landed and you could tell Byer was aware of how lame they were even as she was telling them.

Wipeout is a show which, in its natural state, is steeped in puns and innuendo. John Cena is not really good at either of those things. Look at this face. Even without the silly superhero costume, he doesn’t look like a guy who is comfortable making not-at-all subtle sex jokes on a family TV show. Luckily Nicole is there to pick up the slack on all of that. 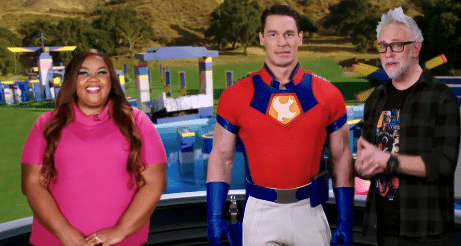 As far as Wipeout episodes go, it was a good competition run by regular contestants. But what I really wanted was movie stars in costume getting bashed around and falling into mud pits. It would have been so much more fun to watch Jai Courtney launched into the gauntlet via rocket sled. Or Pete Davidson taking a giant, foam-covered device to the nards. But noooooooooooooooooo. Not even Michael Rooker was brave enough to attempt The Body Blender. Lame. I guess I shouldn’t expect so much from a group of homicidal anti-heroes.

Here’s the Idris/Viola heavy promo for The Suicide Squad that I rewarded myself with after watching Wipeout. Enjoy.


← Stream It Or Nah: 'Leverage: Redemption' Is A Warm Hug For Fans Of The Original (Just Watch Your Wallet!) | Will Silk Sonic Get Beyoncé To Sing About Meat? →