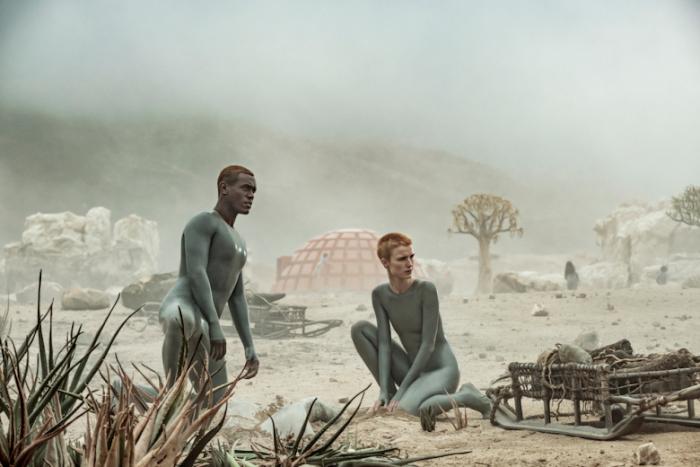 Stream It Or Nah: HBO Max's 'Raised By Wolves' Is Weird and Compelling

Last year, when Netflix released Witcher, I binged it in its entirety in one day and thought, “I don’t know if this is good or bad, but I can’t stop watching.” HBO Max’s Raised by Wolves has a similar albeit less addictive quality, although in this case, I have no reservations about concluding that it’s bad. It is no damn good, but that does not mean it’s not compelling, and it doesn’t mean I’m going to stop watching it. It’s a mess, and although it is not yet a glorious one, it has the potential to be one.

Exec produced by Ridley Scott but written and ran by Aaron Guzikowski (Prisoners), Raised by Wolves is about two sentient androids, Mother (Amanda Collin) and Father (Abubakar Salim), who abandon an inhospitable Earth and travel to Kepler-22b with 12 frozen human embryos. Their only mission is to raise these human embryos into adults. Within 12 years, however, only one child, Campion (Winta McGrath), remains.

Nevertheless, the two androids and Campion successfully create a family until Father puts out a distress signal, knowing that he and Mother are deteriorating and that Campion will need to be surrounded by other humans. Mother does not take this well. The Ark of Heaven — a spacecraft carrying the Mithraic religious order — soon arrives, and Mother reveals a power that allows her to fly around and emit a scream with her eyes that makes people explode. (See what I mean by weird?) She essentially destroys the Ark, although she saves several children to raise along with Campion. There are also a few other survivors of the Mithraic, including Marcus (Travis Fimmel of Vikings fame), who want only to retrieve their children from Mother, before she fills their heads full of atheist lies.

The world-building I’ll grant is interesting, although again, not good. It’s sort of random and kitchen-sinky, as though Guzikowski is making it up along the way. Mother, for instance, disables Father in the opening episode, but Guzikowski seems to realize that the character is needed, and so he’s “repaired” in the second episode. Mother, who flies, and who makes people’s heads explode, is also a shape-shifter when needed, because why not? Meanwhile, there were no apparent alien creatures for the entire 12 years they inhabited Kepler-22b, but they suddenly start popping up when the plot needs some action. Also, for reasons that don’t seem entirely necessary, Marcus and his wife had skin grafts back on Earth, which allowed them to replace two other members of the Mithraic before joining the Arc.

Thematically, the idea here is to pit science vs. religion, but Guzikowski doesn’t really dabble much in that space, at least not yet. Aside from Amanda Collins’ Mother, the characters have not been given much thought, either, beyond stock sci-fi tropes. To be honest, the only thing that keeps Raised by Wolves together is Collins’ Mother, an android necromancer crossed with Faye Dunaway in Mommie Dearest. She is fun, a robot always on the verge of losing her temper, and you don’t want Mother to lose her temper, because she will make your head explode. She is why I will continue watching Raised by Wolves, because it sure as hell isn’t the storytelling, the character development, or the thematic richness of the series.

The first three episodes of Raised by Wolves are now available on HBO Max. Subsequent episodes will be released weekly.

← Shut The Hell Up And Sit The Hell Down, Michael Rapaport | Reddit Asks For Any Story Users Want To Tell, Leading To Some Weird Tales →