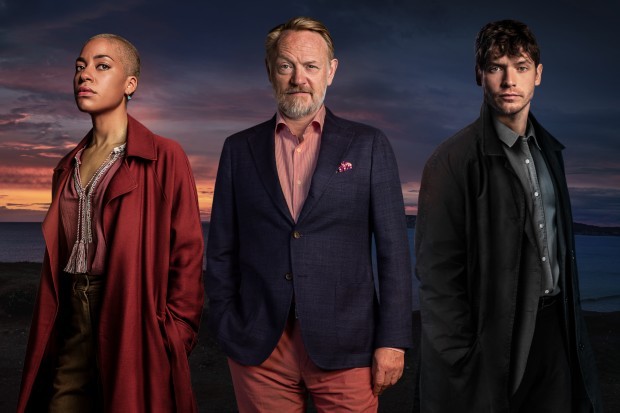 Stream It or Nah: Cush Jumbo and Jared Harris in 'The Beast Must Die'

In The Beast Must Die, a British import currently airing on AMC (or AMC+), Cush Jumbo plays Frances Cairnes, a mother grieving after her young child is killed in a hit-and-run accident. Attempts by the police to locate the murderer fail to bear fruit, so Frances takes matters into her own hands. Doing so requires that she infiltrate the home of the man she suspects is responsible for her son’s death, George Rattery (Jared Harris), a wealthy, abusive asshole, who appears to be above the law.

Frances gains entry into the Rattery family via the sister of George’s wife, Lena (Maeve Dermody), by posing as a journalist who wants to write about Lena’s burgeoning career as a model. She also gains the confidence of Rattery’s meek teenage son, Phil (Barney Sayburn), a constant target of George’s scorn and disappointment. Mia Tomlinson, meanwhile, plays George’s doormat of a wife, who looks the other way when George both abuses their son and sleeps with her sister. Geraldine James plays Rattery’s overbearing and bullying sister, Joy, who yells at the various family members when George is not around to do so. Billy Howle, plays Nigel Strangeways, a detective experiencing his own mental health problems while trying to solve the case before Frances gets herself into trouble.

That’s the setup, and I wish I could say there was considerably more to it than that. It’s the sort of murder drama that you think is going to eventually hook you, especially given the cast, but it consistently falls flat, though there is enough meat on its bones to ride it out until its somewhat satisfying but anticlimactic resolution.

Jumbo, Harris, and especially Howle turn in strong performances, but the investigation — and even the twists — play out in surprisingly predictable ways. When she’s not plotting, Frances spends much of her time wallowing in sadness, while Harris — who is more of a supporting character — spends most of his time chewing out his family members while chewing on the scenery. Only Billy Howle’s detective is given a lot of space to play a more dynamic character, but he’s largely sidelined from the main action and it’s not clear until near the end of the series how he plays into the main arc.

Granted, it’s not a terrible way to spend six hours, and Harris is sufficiently detestable, but it’s so relentlessly morose that it’s difficult to connect with the characters. Fans of Cush Jumbo and mediocre British mysteries, however, may find enough here to commit to all six episodes if only to find out if the beast, indeed, dies.