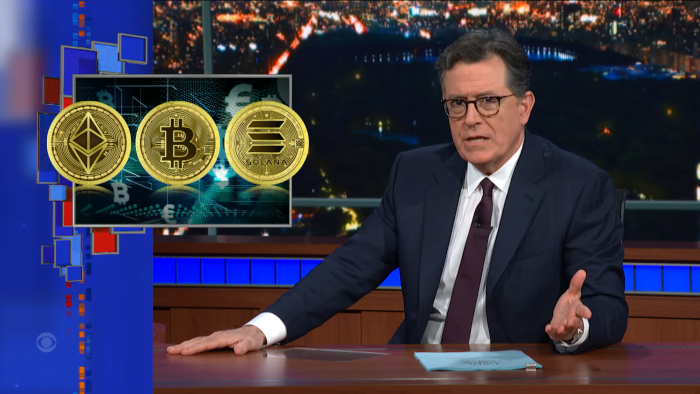 I’m into NFTs!
Not
Flushing money down
Toilets
OK, that was a cheat. However, my attempt at a slam is no less warranted for the people I am slamming (phrasing). As NFTs became all the rage amongst people looking to make money off of poor people, celebrities started getting in on the grift. Things hit a peak during one of the most cringe-worthy interviews I’ve ever seen. This is saying something because I regularly get pinged on the Pajiba Slack whenever Jordan Klepper decides to torture himself.

Now that NFTs and Crypto are starting to bottom out, Stephen Colbert is here to take a few parting shots. Ole Stephen has never been one to mince words when it comes to NFTs. You could say he’s been bored with the whole thing since the beginning. He has had no desire to pop on a Lyle Lanley-style outfit and ask for people’s hard-earned cash. No, Colbert has been a kind of “number one contender” as far as challenging Crypto. So, naturally, he should get a shot at the champ!

One particular NFT that Colbert mocks is the Bored Bunny from dodging legend Floyd Mayweather Jr. Mayweather’s prized NFTs have dropped in value so significantly that it’s almost as if they held no value to begin with. Colbert is also quick to point out the lack of proficient grammar on the website that sells Mayweather’s apathetic rabbit. As someone who has twice been asked by his boss to install Grammarly on his computer, I will not be commenting on that aspect any further (I’m a Lois Lane type).