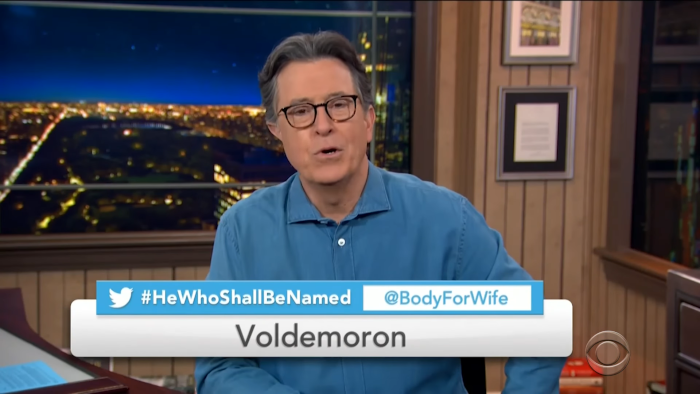 Sometimes it’s easier to have a shorthand, words or phrases that you can share with people so they know what you’re talking about without you having to say it. Usually, that’s for the sake of time and convenience. In today’s case, it’s to avoid saying the name of someone who most of us are sick of hearing about. You may know him as a former reality show host or the owner of a scam university. Stephen Colbert crowdsourced several other names for him.

Colbert asked viewers of The Late Show to tweet their favorite nicknames for the man who knows the Plaza Hotel with the hashtag #HeWhoShallBeNamed. Throughout the year, he has almost exclusively referred to the “guy who won’t accept direct texts from Don Jr.” by these names. It has been a real joy to watch. Especially because, on occasion, I would forget he was doing it. Then I would be greeted by a fun new nickname for one of the worst Presidents in America’s history.

Of all the year-end lists, this may be one of my favorites. The video could have been twice as long, and I would have watched it gladly, especially as you get to see Colbert jump from no audience to jam-packed crowd. It wasn’t that long ago that late-night shows didn’t have audiences! Let’s be honest, it may not be long before that happens again.

At the end of the day, all that matters is that I made it through this whole article without having to say the name of a certain former steak salesman. To me, that trumps everything else.

← Twitter Reacts to the BBC's New 'Anti-Woke' Comedy Show, 'Unsafe Space' | Pajiba 10 For Your Consideration: Aisling Bea has the Talent, the Beauty and the Biggest Heart →