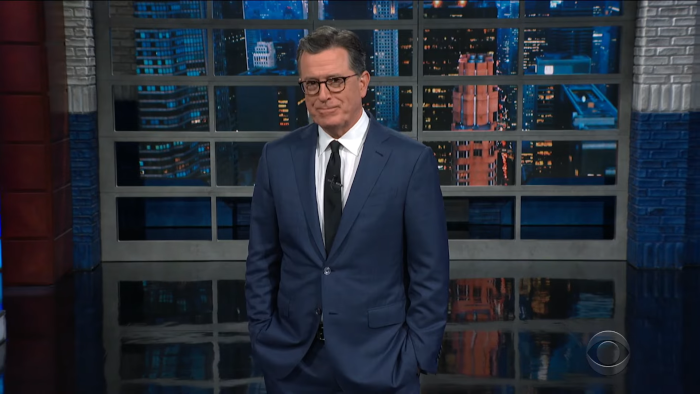 I get it; I am also sick of hearing about the three idiots I mentioned in my headline. However, I’m more than happy to see Elon Musk, Kanye West, and Herschel Walker get taken to task. All three men are despicable in their own way. They deserve to be publically mocked. Especially since they are so eager to mock others. I guarantee that all three men would claim to have thick skin, but they have each shown that that is far from the truth.

So let’s all bask in the warm glowing glow of Stephen Colbert mocking Ye, Musk, and Walker like the dweebs that they are!

Colbert started with Ye, banning him from the Ed Sullivan Theater, where Colbert records The Late Show. Then Times Square. Honestly, due to the increasing number of legit dispensaries (don’t buy from dudes on the street), Times Square is getting more tolerable. It makes sense to keep Ye as far from it as possible. It’s tacky enough as it is.

The host then moved his sights to the only person who makes me not want to save the planet, Elon Musk. The petty, small billionaire completed his purchase of Twitter yesterday. To celebrate, he made a dumb joke. It makes sense because he avoids bad jokes the way self-driving Teslas avoid pedestrians.

Then Colbert took shots at fake cop and absentee father, Herschel Walker. At this point, Walker’s scandals are too many to name. Colbert focuses on Walker receiving pushback from Fox News of all places. If the folks at Fox don’t lob more softballs at the Georgia Senate candidate, he may treat the network like most of his children and ignore them entirely.

I’d be remiss if I didn’t say that Colbert also takes time to mock President Joe Biden. POTUS recently appeared on Jay Leno’s Garage and honestly, that’s punishment enough. But Stephen still had fun at the President’s expense, even pitching him for a new entry in the Fast And Furious franchise, which I would absolutely watch.

At the end of the day, it’s just easier to take shots at the three aforementioned schmucks than the current president. A fact that I’m sure Ye, Musk, and Walker would be thrilled to learn.


← Gisele Bündchen Doesn't Want a Loser for a Husband, Will File for Divorce Today | Colbert Likes Roy Wood, Jr., Jessica Williams for the Next 'The Daily Show' Host →