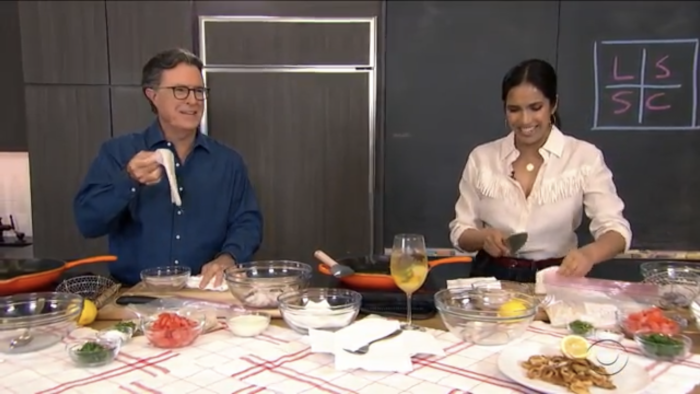 Following the late-night scene over the last year has been filled with ups and downs. The changes due to the COVID-19 pandemic were swift and severe. Hosts recorded from their homes and conducted interviews over Zoom. Well, put all that in the rearview mirror, baby! In his last week before once again hosting live audiences, Stephen Colbert had celebrity chef Padma Lakshmi on his show to cook … together … indoors!

Together on last night’s A Late Show with Stephen Colbert, the two hosts made sangria, calamari, and pure joy. Originally, they were supposed to record the segment on the roof. However, a large storm emerged and sent them inside, which was OK!

As delightful as the segment was, it was also jarring. Even while watching movies or TV shows shot before 2020, I’ve found myself getting nervous when people … touch. You’d be correct in assuming that things shot now have me on the edge of my seat.

It is my hope that, someday, the pandemic-induced nerves won’t live in my head rent-free. I would never compare it to something like PTSD, as there are people very much suffering with such an affliction and for all intents and purposes I am doing great. It has been traumatic though. We watched the world stop (kind of), from the top to the bottom (ya know, except people that refused to adhere to certain guidelines), in a way that felt unfixable (for most). For some of us, that feeling of dread may never dissipate …

But hey, did Padma put kiwi in that sangria?! Look out, summer, cause you’re ‘bout to get all kinds of sugar wine! Consider this a preemptive apology to my hips.