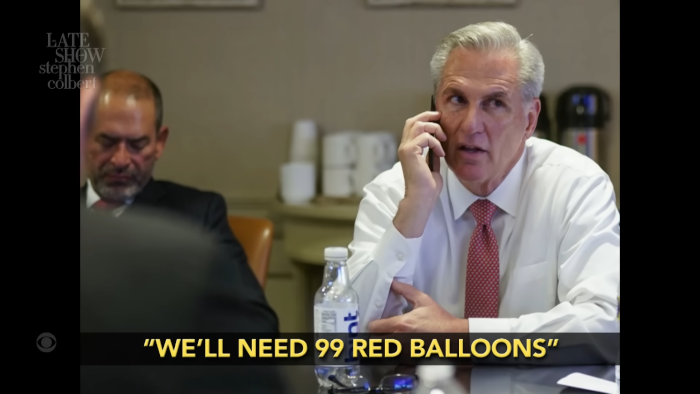 Stephen Colbert Celebrates the Lack of a 'Red Wave'

This is it, my last article about the midterms. Dustin is already recapping everything you need to know (and making me feel increasingly more at ease). I just couldn’t resist this last Colbert segment. I’m always a fan of Colbert kicking off his show with a song parody, but this one brought a certain amount of relief that I feel incredibly grateful for. So I’m going to take one last moment to bask in a massive Republican failure.

Granted, a failure, in the truest sense, would have involved Republicans continuing to not control the House or Senate. That does not seem likely. But with most candidates who are loud and proud election deniers getting kicked to the curb, it’s a big win for Democracy and my anxiety. When I saw Colbert kicked off a recent episode of The Late Show with Stephen Colbert by making fun of the losses, I was hesitant to watch it. Now I’m glad I did.

The setup is simple. Kevin McCarthy wanted to throw a party to celebrate a Red Wave, so he enlisted German singer Nena to get him 99 red balloons. Now the wave has not happened, and Nena laments that her balloons will never be used in a celebration. It’s such a silly idea that gets funnier as it goes on, and even provides a bit of catharsis.

It almost felt like, because Stephen was celebrating, I was allowed to celebrate. I know that may sound silly, but things seemed so dire heading into this election that I never assumed they would turn out OK. Maybe that’s because I’m living in a state that almost helped the Red Wave happen, but that’s a story for another time. Tensions were high, and I don’t think I let myself get down off that ledge until today. All it took was a little parody music which, for me, tracks big time.