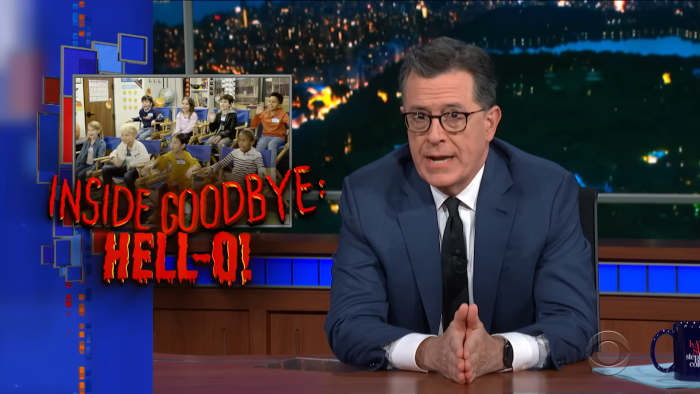 Halloween has arrived! That means post-spooky seasonal depression should hit me around 7 AM tomorrow. It also means that we can spend all day watching spooky movies. Good, bad, it doesn’t matter. I’ll watch them all! That’s pretty easy because I’m a grown-up. It’s not as easy for kids who may have more restrictive parents. I was not one of those kids and won’t be one of those parents, but I still want more kid-friendly scary movies for my kids’ earlier years. Luckily, Stephen Colbert came up with the perfect solution!

The host of The Late Show sat down with a group of grade schoolers. He wanted them to help him develop a scary movie just for them. The cuteness in this bit is off the charts. A bunch of intelligent, funny kids who are hilarious in their seriousness. None of them take Colbert’s request for ideas any less than seriously. They also throw out ideas that make you wonder how they pick up on certain things. Though I shouldn’t be too surprised. One of my kids holds things to his ear like a phone despite only ever seeing me take phone calls through a headset.

The movie that gets made is also pretty fantastic and laden with funny celebrities. Everyone involved with this bit understands exactly what it is. They aren’t poking fun or talking down. They’re bringing these kids’ ideas, silly as they may be, to life. They take the kids seriously, which is probably why they’re so eager to participate. There’s genuine excitement when they throw out ideas because they know they are being listened to.

A perfect way to ring in Halloween!


← Liam Hemsworth Is a Poor Substitute for Henry Cavill in 'The Witcher' | Margaret Qualley and Joe Alwyn Have Zero Chemistry in 'Stars at Noon' →
Header Image Source: CBS
Most Viewed