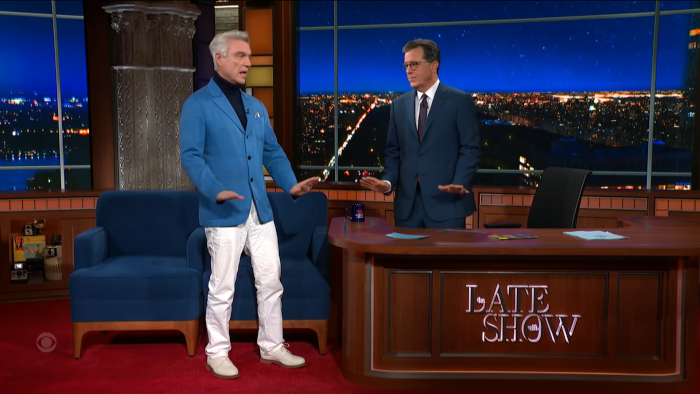 David Byrne is back on Broadway! His hit show, American Utopia, is tearing up the Hudson Theatre in NYC. To celebrate, he made a trip (slightly) uptown to talk with Stephen Colbert and the whole thing was an absolute delight. Not only do we get to see David and Stephen dance together, but we get treated to a purely delightful interview with the former lead singer of The Talking Heads.

All of them! Nerds! But that’s just the thing, nerds make the best interviewees. Byrne is tickled to be talking to Colbert. He practically squeals when talking about getting his current broadway gig. At one point he shows a picture he drew of a pimple on a donkey! He’s a nerdy little scamp and it’s an absolute joy to watch.

Even the dancing is nerdy. Byrne is known for his dancing (among many other things) and instead of looking cool he just looks like he’s having fun. There’s a wonderful lack of embarrassment to Byrne that just put me in a great mood. I’m no stranger to Byrne, or to being a nerd, and this was the interview I needed to see today. I hope it is for you too!

I’m also going to tack on Byrne and his American Utopia crew singing I Zimbra because that song rules.

← What Does 'Let's Go Brandon' Mean, and What Does It Have to Do with Kathy Griffin? | Industry News and Trailer Round Up: 'Hocus Pocus,' Matt Haig, and Boba Fett →