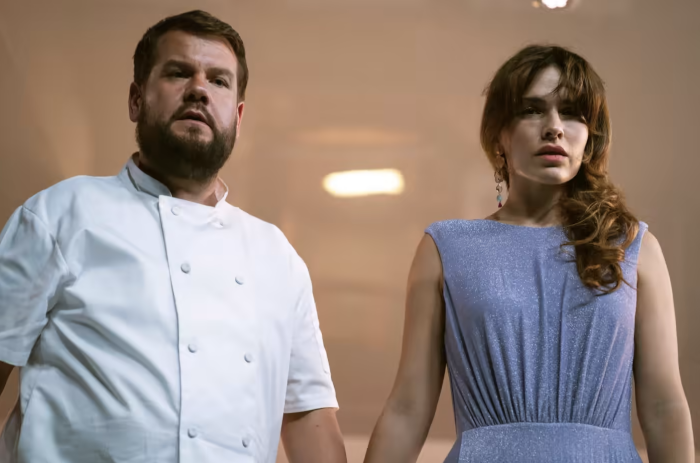 Mammals is a six-episode dark comedy on Prime Video starring Sally Hawkins, Melia Kreiling, Colin Morgan, and James Corden. The fact that James Corden is very good in this is probably the hardest thing about watching Mammals, because while he may be a terrible person, he carries Mammals as Jamie, a Michelin-star chef and the husband of Amandine (Melia Kreiling), a woman who is clearly out of his league.

Jamie, however, is depicted in Mammals as something like the safe choice for Amandine, after she catches her wealthy fiance cheating on her. Despite the fact that Amandine looks like a supermodel, and Jamie looks like James Corden, they make for a fetching couple and have enough chemistry that it all makes sense. Amandine clearly loves Jamie for who he is, and along with an adorable daughter, they make for a close-knit and loving family.

That’s why it’s so upsetting to learn that Amandine — who is pregnant and otherwise seems so devoted to Jamie and their family — is cheating on Jamie with multiple men. Jamie is crestfallen, and Amandine feels like something of a gross cliche — the beautiful woman that marries for love but gets her physical needs met elsewhere.

But all is not what it seems, and ultimately, this is a show about “mammals” and marriage, and the primitive nature of humans, including Jamie’s sister, Lue (Sally Hawkins), and her husband, Jeff (Colin Morgan), who seem like the perfect couple, too, except when they don’t. Jeff, meanwhile, helps Jamies investigate the men with whom Amandine is having an affair while spiraling into his own depression.

The screenplay comes from the Tony Award-winning playwright Jez Butterworth (who has also had a hand in co-writing screenplays for movies like Edge of Tomorrow and the forthcoming Indiana Jones movie). Mammals is something of a character study, a light mystery, and an examination of marriage. While the premise sounds heavy, Mammals is ultimately a comedy (dark, though it may be) with a few fantastical flourishes (Tom Jones makes an absurdist cameo, along with a whale). It’s brief, too — it clocks in all told at less than two-and-a-half hours, and it’s worth that investment to find out the twist.

If, however, the James Corden of it all is too much, and you can’t bring yourself to watch until the end, here’s the twist, which won’t have quite the impact unless you watch all the way through, so let this be a warning spoiler:


After Jamie discovers that his wife has been sleeping with other men, he’s angry and mopey and devastated. Not only does Jamie eventually confront Amandine, but he does so publicly, humiliating her during the opening of his restaurant. Amandine does not, however, deny the affairs. In fact, she not only confesses but goes into detail in a way designed to hurt Jamie, including admitting that she had an affair with Jamie’s best friend and brother-in-law. The viewer’s reaction is meant to be something along the lines of, “What the hell? Why are you being so cruel to this man who is so clearly devoted to you?” The twist, however, is that we learn that Amandine only began sleeping with other men in retaliation after discovering that Jamie was having an affair behind her back. That’s where our expectations are subverted: Why would Jamie cheat on a charming, beautiful woman clearly out of his league? Because he’s a “mammal.” It’s in the primitive nature of men. It doesn’t matter how good they have it, Mammals seems to be suggesting that a man will still cheat if given the opportunity. And why, prey tell, does the series end with a giant whale in the middle of an intersection? Because they’re the largest mammals, of course!


← Has 'The Great British Bake Off' Lost its Magic? | HBO's 'The White Lotus' Season Two Review: This Vacation Sucks →