So, Outlander finally made it to Netflix and you want to see what all the fuss is about. First of all, let me applaud you on such a strong decision. Your life is sure to be the better for it. Or you’ll have unattainable goals. Either way.

Second of all, buckle up — because if you’re anything like me, your brain is about to get broken. Ready?

Outlander is based on a series of novels by Diana Gabaldon (AKA “Herself”) about an English WWII nurse who accidentally falls through time to 1700s Scotland and falls in with the world’s hottest Scottish highlander, which is redundant, but still.

It’s also about the leads (Caitriona Balfe and Sam Heughan) acting their blessedly gorgeous asses off. It’s a visual love letter to Scotland with stunning costumes, beautiful music, and a lot of really serious sexytimes.

There’s Claire Randall (Balfe), the independent, headstrong, English feminist icon (don’t @ me), and “Sassenach” (Gaelic for “outlander”) whom I named my daughter after. She goes on a holiday in the Scottish highlands to reconnect with her husband after WWII, only to discover the hard way that the stone circle they visit is a portal through time. Sounds silly, is not.

There’s Frank Randall (Tobias Menzies), Claire’s loving historian husband whom she’s desperate to get back to, and whose ancestor — the sadistic redcoat and baddie to end all baddies, Black Jack Randall (also played by Menzies) — makes his vicious presence immediately felt in 1743.

And there’s Jamie Fraser (Heughan), JAMMF, King of All Men, and chief pantymelter extraordinaire, the young Scot with a price on his head who puts a big ole spanner in those works. Feel free to make any spanner/penis jokes to yourself.

Be forewarned: The character of Jamie Fraser has the very real capacity to ruin all real human men for you, and that was before Sam Heughan looked at you like this:

What Kind of a Commitment is This?
There are five seasons of Outlander so far. The first two are available on Netflix, and seasons three and four are available on Starz, iTunes, and Amazon. Starz just announced the Season 5 premiere date, Sunday, February 16, 2020.

The truth is IMO everything in Outlander is just chasing the dragon of Season 1. But that’s some delicious opium, so bring every last little nugget on as far as I’m concerned. That’s how opium comes, right? In nuggets? I don’t do a lot of old-timey drugs.

Are the sexytimes really that sexy?

I am the ultimate Outlander apologist, but there’s no escaping that the series is, well, quite rapey. This is because of the source material on which Outlander is based, but the point remains. 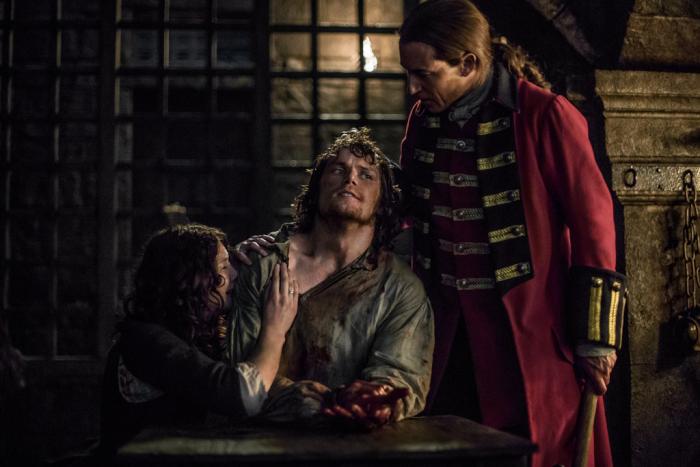 Does Diana Gabaldon have a thing about rape? Is it historically accurate? I can’t say. I’m not here to weigh in on it, or the show’s depictions of domestic violence, slavery, race, miscarriage, suffering/dead children, and homosexuality. I can say the producers have tried to handle the source material as thoughtfully as possible, but it’s something to bear in mind before diving in.

Oh Droughtlander, that saddest of times between seasons. Luckily there’s lots of other Outlander content to help you get your fix. And if you’re a thirsty bish like me, you’ll need it all.

Diana Gabaldon is no George R. R. Martin; that lady keeps cranking, and lucky for us she does. There are eight main Outlander books in total, and a ninth (Go Tell the Bees That I’m Gone) in the works. Yes, I love the books. Yes, they ate my brain. Yes, you should read them.

Not to mention the spin-off John Grey novels, novellas, a graphic novel, reader guides, and probably other things I’m forgetting.

As for Starz additional content, the writers behind Outlander do the great Official Outlander Podcast (love) in which they comment on each episode. There’s also the Outlander website for little behind the curtain tidbits (me = writer nerd = annotated scripts YAS.)

Do you need to read other awesome people experiencing Outlander for the first time? Me too. Some of my faves: Roxane Gay’s (yes, that Roxane Gay) Season 1 Vulture recaps; AM to DM host Saeed Jones livetweeting his immersion into the Outlanderverse on a sick day, and Connie Verzak’s smart, gif-tastic recaps.

Twitter and Insta accounts for the cast and crew? Yes. Master lists cataloging all the sex scenes in the books? Yes. Knitting patterns so you can make yourself some of Claire’s awesome shawls and fingerless gloves? Yes. Outlander Tumblrs where you can fall down a well of glorious gifs? Jesus H. Roosevelt Christ, YES.

So welcome to the fandom, Sassenach. We’ve got our bagpipes and our whiskey waiting. Slainte mhath.

← Stream It or Nah: Pretty People Play With Puns in Netflix's 'Falling Inn Love' | Fact Checking 'BH90210' Ep 4: Did Shannen Doherty Get Paid the Most? →