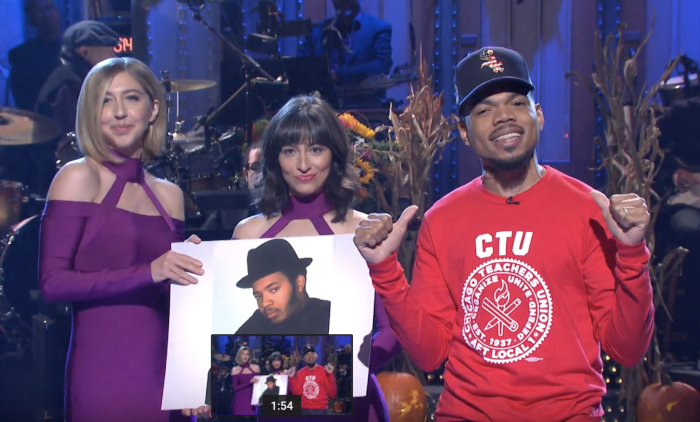 Cold Open — Alec Baldwin’s Trump is back, unfortunately. He’s holding a Trump rally. The best part about the skit, however, is how well SNL did in putting together the extras in the crowd, all of whom are very white. The skit makes fun of Trump supporters more than Trump, although there’s a pretty good dig at Trump when Pete Davidson plays one of Trump’s new biggest supporters, a member of ISIS who escaped from Syria last week. Ooof. Mark Zuckerberg also attends the rally, because the skit is less about trying to be funny and more about being a potpourri of this week’s news. Daryl Hammond makes a cameo, playing Bill Clinton, congratulating Trump for being impeached for something other than his sexual assaults, while Fred Armisen plays Turkey’s President, Erdogan, who does some light mocking, as well. Not the worst cold open. Also, not the best. (Watch Here) (Score: 4.5 out of 10)

League of Legends Championship — Chance plays a sports reporter, Lazlo Holmes, who is brought in to cover an ESports championship game. He is completely clueless. I didn’t think I’d like it, but Chance has oodles of charisma and elevates a lot of otherwise predictable jokes. (Score: 6 out of 10)

First Impression Court — Chance plays Judge Barry, who makes rulings based on first impressions, often as soon as they walk through the door. “Your name is LaDenzel? Yeah, you’re guilty.” The setups are a little too obvious (and too reliant on stereotypes) but do stick around for a fantastic Jason Momoa cameo. (Score: 6.5 out of 10)

Tasty Toaster Tarts — A bunch of kids come over to a friend’s house and, while the friend offers snacks, the kids begin to suspect that he murdered his own parents. It’s almost funny, but it’s missing something. (Watch Here) (Score: 4 out of 10)

Spooky Song — Out in a graveyard, four corpses sing a ditty of the damned, a song about how they each died, only one of the dead guys played by Chance is reluctant to sing the song about his death. “No, no. That’s OK. You can skip me.” The others have to drag it out of him, but he eventually spills and trust me: It’s worth sticking around for. (You’re gonna love this, Mat) (Score: 7.5 out of 10)

Weekend Update — It was a pretty decent “Update,” with the Trump sons, some decent Trump jokes, and even a funny dig at Bernie (though, not that AOC joke, because boooooooo), and then Che went and ruined everything with a shitty transphobic joke that not even he was confident in delivering. I was just about to suggest that Che and Jost have been remarkably not terrible this season. (Score: God Damnit Che!)

The Trump sons, however, were unusually good this time out.

Love at First Sight — Cecily meets a guy at a bar, and they are so in love that they begin floating around, which provides for some obvious but fairly amusing Peter-Pan wire physical comedy, although the skit drags on for about 2 minutes too long. (Watch Here) (Score: 4 out of 10)

Space Mistakes — A trailer for a movie about the one place you can’t make a mistake: Space. Forget to put on your seatbelt, and … (Score: 7 out of 10)

Choir Fashion — Well, they can’t all be winners, though I suspect those more familiar with choir will like this more? (Watch Here) (Score: 3 out of 10)

Dance Class — Kenan plays a dance instructor giving a class on a night with a full moon, and, well, he’s a werewolf. It’s not a good skit, and yet, Kenan makes it one through the sheer power of his Kenan-ness. (Watch Here) (Score: 5.5 out of 10)

← Review: 'The Current War' Is Downright Embarrassing | Republican Senators Are Stuck Between Rocks-for-Brains and a Hard Base →